In the first series of conversations, the India@2047 Leadership series explores how building soft power, creating economic might and rehauling the education system are a few factors to consider as India creates a roadmap for the next 25 years 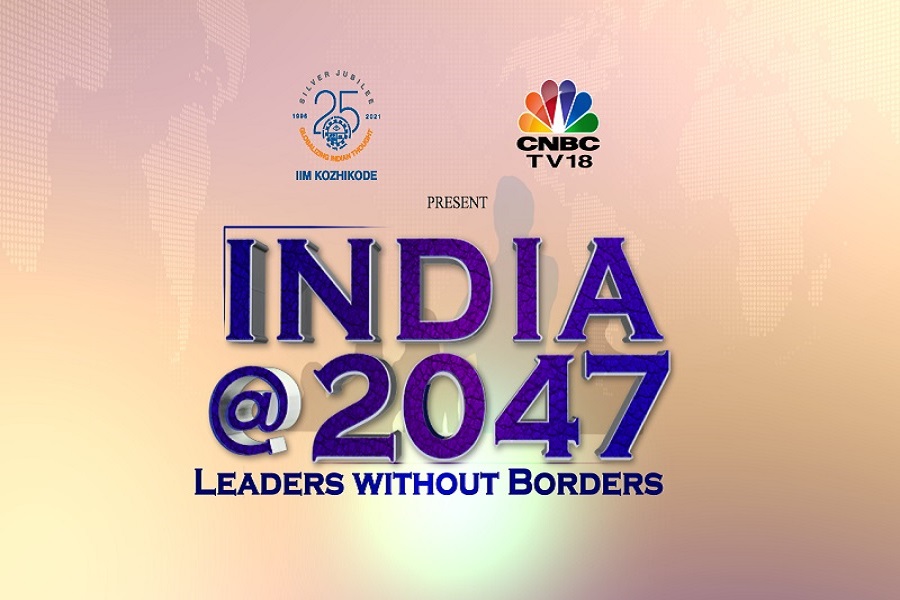 To anyone born in the 80s, there are two different Indias: both in our own collective consciousness, and that of the world. One India belongs to the fakirs and godmen, glossy magazine images of third world poverty, news stories of widespread corruption, and popular spirituality and yoga movements.
The other India belongs to an aspirational diaspora composed of CEOs of the top technology companies, celebrated doctors, scientists, and several of the world's richest people. It also is a nation teeming with opportunity - a leading start up nation, the world's pharmacy and back office, soon to be the next technology hub and data capital, and an economy poised to be the third largest in the next decade.
In a rapidly changing world order, countries are increasingly looking inward. For 75 years, India has been hailed for its democracy, with all of its paradoxes. Today, India is shaping the global narrative on technology adoption and innovation, green tech and sustainable growth, and the ability to bootstrap one's own growth story. Silicon Valley is shaped as much by the IITs as it is by MIT, and possibly, even more so!
As India heads towards the centenary year for independence it is time to both reflect on the milestones of the past and chart out a road map for an aspirational future. While the GoI readies its plans, CNBC-TV18, in association with Indian Institute of Management Kozhikode (IIM-K) has launched India@2047, Leaders Without Borders: a five part leadership series that engages in a meaningful dialogue on the key drivers for our social and economic growth. In this series, CNBC's Managing Editor Shereen Bhan and Director, IIM-K Debashis Chatterjee speak with luminaries from various fields to capture India's aspirations, and to draw up a charter of change that will help shape the idea of India@ 2047.
Attracting Minds

For 75 years, India has also been the world's largest provider of highly qualified, competent and committed white collar workers. Now, it is working hard to create the same appeal back home. In 2021 alone, India boasted of 105 unicorns and over 76,000 recognised startups. Investments in physical infrastructure are making logistics easier, while India's tech stack is one of the most advanced in the world. Policies and tax regimes are getting both friendlier, and more transparent, moving away from the bureaucratic, paper pushing image leftover from the licence raj to a modern, digital India. Renowned panelists Ms. Arundhati Bhattacharya (CEO & Chairperson Salesforce-India), Ms. Adwaita Nayar (CEO Nykaa Fashion) Mr. Anchit Nayar (CEO Nykaa Beauty e-commerce) weighed in with their thoughts on India’s next leap forward as part of the path-breaking series.
Culture, political ideals and foreign policy are the three pillars that decide whether a country exports fear or inspires hope. The ability to inspire hope in a world gripped by fear is soft power. Joseph Nye, a Harvard professor who introduced the concept of soft power defines it as the ability to obtain preferred outcomes through attraction, rather than coercion. Shashi Tharoor opines that the attitudes conjured up in the global imagination by the mere mention of India's name, are often a more accurate gauge of soft power than any sort of a special analysis of culture, foreign policy, etc.
India's soft power arises first from the aforementioned diaspora. Then from it's deep cultural ties with several nations and its readiness to provide aid in times of trouble - especially during the recent covid pandemic. And finally, from its cultural exports in the form of Bollywood, international day of yoga, butter chicken and Ayurveda. In short, India's soft power spells from its core identity, not from manufactured cultured festivals and other forms of propaganda. Generating Opportunity
There are five mega trends that could shape India in 2047: digital adoption, artificial intelligence, new energy, the metaverse and a skilled talent pool. These are also key areas where India can lead with innovation. However, the Global Innovation Index 2021 points out that India excels in bringing innovation to the market but not in driving innovation. This needs to change, as the Indian marketplace isn't forgiving to copies of western business models. Imitator models work only in the short term, and to remain relevant in the long run, businesses need to adapt to India, and to solve problems that are uniquely Indian.
India also ranks highest in digital awareness in Salesforce's digital awareness index, which means that the Indian population is more clued in - be it 70 year olds learning to navigate online shopping, or 10 year olds learning to code. This is unique to India.
As is India's technology stack. India is looking forward to leveraging its digital payments stack and is reaching out to many countries to help them build their own payment systems. Several financial inclusion schemes have been launched off of the Aadhar biometric stack that allows for easy KYC processing, thus widening the net of Direct Transfer Benefits
Redefining Disruption
Can India become a land of creators rather than followers? Can it lead global disruptions, instead of adapting to them? According to Debashis Chatterjee, that may depend on how we define disruption. "Imagine the disruptive power of 1.5 billion competent and compassionate creators. Technology simply serves as an amplifier and accelerator for the values of the creators behind these businesses. This is where the Indian values of connection, compassion and empathy will play a crucial role."

He also draws attention to the fact that it wasn't very long ago that India was considered a Vishwa Guru, educator to the world. India's Nalanda and Takshila universities were known far and wide as the pinnacle of learning and wisdom. Today, India has the opportunity to shape over a billion minds, through a revolution in education. While India's budget this year has taken note of the New Normal, and made a slew of announcements to promote digital learning, the clamour for faster implementation of the new National Education Policy is also growing louder.

Higher education reform is the need of the hour. Technology moves at lightning speed today, and the need to skill, re-skill and up-skill is vital, if the industry is to find India's young graduates employable. The employability of India's graduates and postgraduates has only shifted gradually from 38.12% in 2016 to 46.2% in 2022. Ms. Shaheen Mistry  (CEO, Teach for India) & Ms. Urvashi Sahni (Study Hall Educational Foundation), as learned experts from the field, suggested that urgent and sustained investment is needed in teacher capability, infrastructure and access. India needs to make teaching aspirational, pay teachers more, and funnel its best and brightest into the profession. It also needs to look at infrastructure differently: how can bringing blended education help those that may not even have access to electricity? These are some of the uniquely Indian problems that startups and policymakers alike are targeting.
India also needs to change its mindset about the value of education. For a country seeking to grow innovators, it needs to focus on an education system that explores and empowers each child to achieve their fullest potential, irrespective of the 'value' of these talents in the current economy.
This requires a reframe. India needs to centre learners and learning, and then ask questions like: How can we use immersive learning, deep insights and creative pedagogy instead of linear and cognitive learning? Can we make education more equitable, inclusive and high quality, irrespective of where the learner is based physically?
This calls for reimagining educational institutions as hubs, not buildings. If India stops thinking of educational institutions as physical places and instead thinks of them as 'spaces'. These spaces can function as hubs for networks of educators and learners, which can then connect to other hubs across national boundaries, truly democratising education and levelling the playing field.
The next chapter of India's growth story is being written today, in the ways in which 1.5 billion minds are learning about their identity and ability. The shaping of these narratives is happening in real time, and young people today are growing up among the catastrophic aftermath of mindless consumerism. As Debashis Chatterjee sums up beautifully, "The world needs a return to a distinctly Indian attitude of service, captured beautifully in a dictum from the Rigveda that urges us to work for 'the happiness of the multitude and the welfare of the many'."
Not surprisingly, this sentiment also sums up India's vision for 2047.The pages slugged ‘Brand Connect’ are equivalent to advertisements and are not written and produced by Forbes India journalists.

Tweets by @forbesindia
Ayyappan R on plans to make Cleartrip an end-to-end decision-making platform for anyone who wants to travel
HCL Tech launches climate change learning for employees; Pixxel's third satellite to launch on November 26