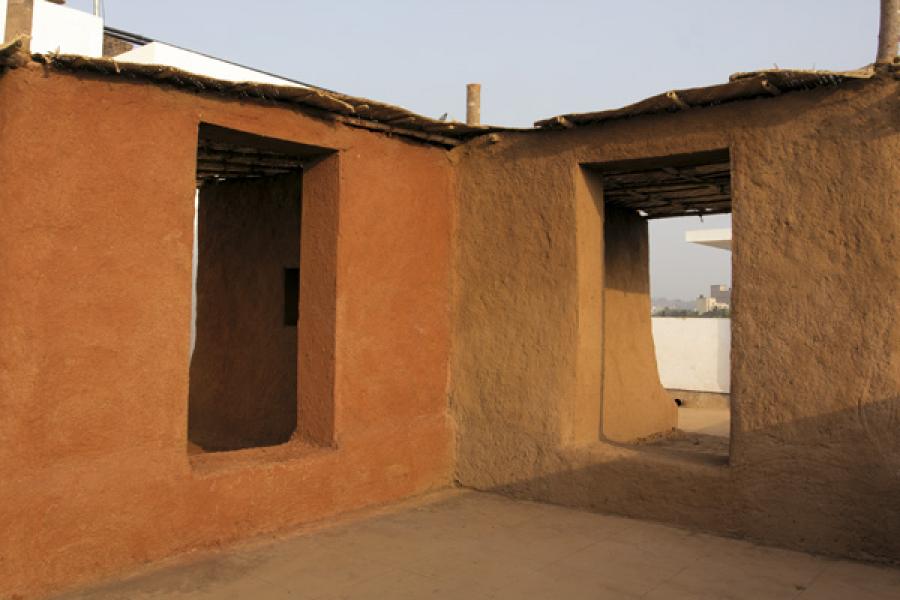 Image: Manoj Patil for Forbes India
BUILDING BLOCKS A wall made out of Lafarge’s special binder (right) is being tested in preparation for the company’s expansion into the affordable housing segment

Perched on the terrace of Lafarge India’s six-storey construction development lab at Andheri East, Mumbai are two very incongruous huts. The structures look out of place in the grey, concrete landscape of the Mumbai suburb. Twenty tonnes of bright red mud and sticks were hauled up the stairs to build them. Here in the sea of dish antennae and mobile towers, they certainly stand out. One of them has been built the traditional way with a mix of red mud and cowdung and another of exactly the same dimensions, is made with mud and special binders that could enhance the life of the structure more than five times.

Local masons are working to make the huts as authentic as possible, using commonly-used materials and building practices. Lafarge’s new binder has some way to go before it can go to market. Yet, within the French company—whose first contract was to supply lime to build the Suez Canal in 1864—the experiment is proof that the need for localisation was never so important.

For over a decade, Lafarge’s India strategy mirrored most multinational cement companies that came to India. It started off buying Tata Steel’s cement business in 1999, followed by Raymond’s cement facility in 2001. The most recent acquisition was Larsen and Toubro’s concrete business in 2008.  The differentiation from the rest of the pack could well be playing out now. While other construction majors like Cemex and Italcementi are still looking for acquisitions, Lafarge plans to focus on executing projects in the pipeline as well as using innovation to drive growth.

The strategy is partly driven by the global slowdown and resulting pressures on the company’s bottom line. Though it is the world’s largest cement maker, Lafarge has a debt of $15.7 billion and it is trying to cut the burden by divesting assets. Bruno Lafont, chairman and CEO of Lafarge, who inaugurated the lab at Andheri says the divestments from non-core businesses are an ongoing process since the group is always reviewing its businesses. They are not applicable to India at all, he says. Here the focus is on using innovation to grow the market.

India is set to emerge as third largest construction market in the world by 2017. “Cement has been around for 200 years—no one has found a cheaper way to glue stones together yet.’’ But the picture is very different for concrete, we can improve it a lot, he says. We have to make it stronger, more durable and easier to use. The mandate for the Lafarge India team is to develop innovative materials, developed here that meet market acceptance.

The company has spent over three years trying to get all the stakeholders in the construction industry on board. A good part of this has been working with architects and customers on the technical aspects. In its traditional market, the high-rise segment, Lafarge in India has introduced products including a new high-strength concrete for high-rise buildings.

But if most of the growth is likely to be in the low-cost segment, it was necessary to address it. Lafarge has rapidly adapted its supply model, including the supply of concrete in small quantities (buckets) that can be used in the repair and construction of buildings in low-cost areas. As the Lafarge team looked further afield, to smaller towns in Bihar and West Bengal, they figured the real challenge was to reach out to price-sensitive markets in rural India. Studies showed that one way to find newer customers was to tap the affordable housing segment. “That was when we started thinking of mud houses,’’ says Lafont. The idea was to make basic houses more sustainable, by using these materials. These new buildings can last five years instead of a year, and we are testing out some of this, he says.

But can the poor afford the magic mix? If they see the advantages, and if we can keep the costs low, they will see the value in it, he says. The company currently has big concrete production plants at construction sites, for luxury housing builders like the Lodha group. Lafont says margins need not be low at the opposite end of the market.

Though R&D and Innovation are areas of strong focus, Lafarge does not fix resources as a percent of turnover like many multinationals. About €130 million was spent on R&D in 2011. India and China are ideal markets to demonstrate such growth.

The idea is also to have a balanced portfolio for customers in all the segments. Lafarge’s network in over 70 countries ensures that there is a steady cross-fertilisation of innovations being tried for different customers, he says. For instance, the common problem of cracks in buildings—Lafarge understands why these are caused. So, Lafont says it’s easier for them to find out how they can be avoided in a mud house.

Innovation on the mix for affordable houses came from an idea generated in India with experts from France getting involved in the product development. It has been developed for the needs of rural India and has multiple applications that will support stronger, long lasting homes that require less maintenance. So far, the product has been subject to rigorous technical testing by the Group’s labs in France and Malaysia. Once testing is complete, it will initially be launched in rural markets in West Bengal. If successful, it will certainly open a new chapter in the history of the 150-year-old company.