Upwardly Mobile - On The Phone, In The Air

Those of you looking forward to relaxing with the cocktail n’ canapés, catching up with on movies or snoozing through the flight, wait for that contraption — mobile phone — to ring. A growing number of airlines including  Emirates, Oman Air, Singapore Airlines, and Air Asia are rolling out services that will connect you to terra firma through your own smart phones, laptops and Blackberrys. 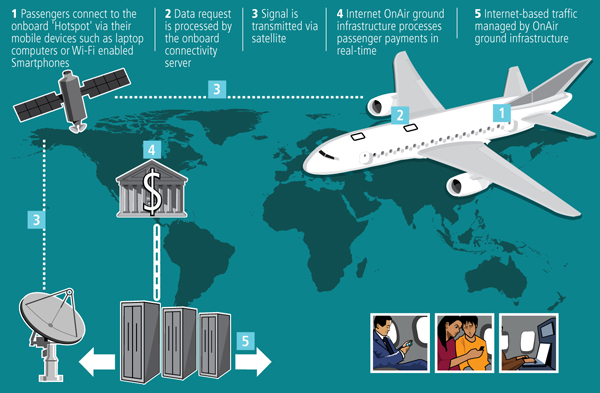 So, apart from updating your Facebook status and tweeting about the crew’s uniform, you will also be able to carry out other less-satisfying activities such as chatting with your boss on why the deal was not closed on this trip. Satellite technology enabling mobile telephony has been around for over a decade. In the first round, passengers had to use chunky at-seat phones, connected by Inmarsat, that were installed on the planes. Payment was by swiping credit cards. This never really caught on except maybe on corporate jets.

New technology, being rolled out by companies like OnAir and Aeromobile, allows travellers to use their own phones and pay their service provider at regular international roaming charges that are simply added to the bill at the end of the month. Most airlines like Emirates, Singapore Airlines and Cathay Pacific are putting such systems on planes like the A380, A340 and B777 that fly on the long routes.

It was not just technology that was holding back the decision about whether to offer phones on flights; it is also the fear about what telephones can do to the flying experience. Whether 400 passengers sealed in close proximity in a pressurised aluminium tube will appreciate this freedom of speech is still the question.

Asian and Mid-Eastern airlines think this is a good development and are leading the change. “We are seeing that staying connected is a very important need for passengers these days,’’ says Patrick Branally, Emirates vice president, passenger communications and visual services. Look at people at the airports, they are texting, calling, emailing all the time. Flying is a stressful experience and our aim is to make it as enjoyable as possible,” he says. Emirates has spent close to $26 million, to equip its planes with the facilities and is currently testing passenger response on a couple of routes. “We don’t plan on making any big returns on this investment, since the revenue share with the mobile provider is only a very small part. It is all about being able to offer something extra.’’

The most recent announcement was from Singapore Airlines, a carrier noted for its service standards. After some debate, it is rolling out Wi-Fi Internet and mobile telephony services like text messages and Internet on the phone.

This makes it the first airline in Asia to do so, but the carrier has stopped short of allowing mobile phone calls. Foo Chai Woo, general manager, India for Singapore Airlines says, the systems being installed on the planes now will have the capability of voice calls, but a decision on this is not yet taken.

But what about the noise that all the calling — and worse, phones ringing — will generate?

OnAir’s CEO Ian Dawkins says the fears are exaggerated. Airlines already using the service report hardly any complaints, he says. Airlines can switch off the voice access when lights are off, that is when people are resting. The ambient noise in an airplane too takes away some of the tones from the conversation. So you will generally not hear what the person in the row in front is saying, he says. In the business and first class cabins, seats usually have a lot of space between them.

He sees the service evolving in the future. Airlines are planning to use the connectivity to offer value added services to passengers. Passengers can, for instance, receive text messages about their destination, details about connecting flight delays or information about gate numbers etc., he says.

Dawkins says India could be a very large market, because of the extensive mobile phone usage. Current government rules, however, do not allow mobile telephony on flights over the Indian airspace. This may change as more airlines offering these services start operating.

The Directorate General of Civil Aviation has recently amended rules allowing air travellers to switch on their phones the minute the plane touches down. This was earlier allowed only after the aircraft had come to a halt. The US government too prohibits voice calls over its airspace, because of Federal Communication Commission constraints imposed for security reasons. However, many airlines offer data features that can be used on Wi-Fi enabled phones.

The OnAir technology (see graphic) creates a local GSM environment within the aircraft, which does not interfere with the flight controls in any way. The system cannot be used during take off and landings. Airlines are still treading slowly on the phone trail. British Airways, for instance, will offer it only on its most popular (and lucrative) London-New York route, after a survey among business passengers. The service will be only to send and receive text data, no voice calls will be allowed. “In contrast, the Middle-Eastern carriers are the fastest adapters,’’ says Dawkins, whose first customer was Oman Air.

As hand phones are set to overtake PCs as the primary device to access the Internet in the next few years, airlines will find it difficult to resist the lure of the phone.

Tweets by @forbesindia
A Nation Awakens to The Freedom of Finance
Book Review : Inside Central Asia