Is NREGA Running Out of Steam?

The rural job scheme returned the UPA to power in 2009. But seven years on, it’s plagued by corruption and ineptitude 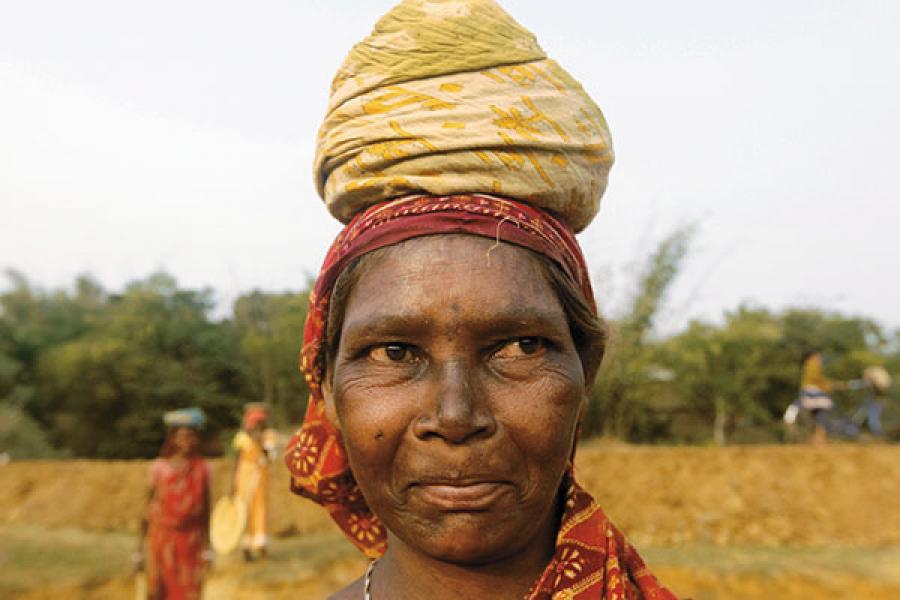 Image: Rupak De Chowdhuri / Reuters
Even though the rural job scheme brought in financial inclusion in the first two years, it hindered the development of micro-enterprises subsequently

Have you ever stared at a Jackson Pollock painting and wondered how to make sense of it? Of course, evaluating a government scheme like the Mahatma Gandhi National Rural Employment Scheme (MGNREGS) is not the same thing, but you get the picture. It is not easy.

Here’s why: In the seven years since its inception in 2006, the government of India has spent over Rs 1.80 lakh crore for the scheme that guarantees 100 days of employment to one member of rural households. The trigger for the scheme was to reduce economic distress in rural India, often leading to migration out of villages.

The implementation of the rural job scheme was started on a pilot basis in 200 rural districts in February 2006. In the next financial year, it was extended to an additional 130 rural districts. The remaining ones, barring those with 100 percent urban population, were notified under MGNREGA from April 1, 2008.

Initially, the scheme was such a hit that it was expanded to all rural areas by 2008. It was hailed as one of the key reasons for the UPA returning to power in 2009.

However, like several other government schemes in the country, the implementation of MGNREGS has been plagued by corruption charges as well as inefficiencies. Bulk of the research on MGNREGS has been focussed on its implementation loopholes instead of its impact. The latest salvo in this regard has been fired by the CAG. In its recent report, the government auditor has highlighted gross irregularities in the scheme in many states apart from an overall decline in the rural employment (per household) from 54 days in 2009-10 to 43 days in 2011-12. The report also questioned the crucial linkage between MGNREGS implementation and poverty alleviation. “It was also seen that Bihar, Maharashtra and Uttar Pradesh, which together account for 46 percent of the rural poor, utilised only about 20 percent of the Central funds,” it stated.

So, seven years on, what has been the impact of MGNREGS? Cold statistics present a mixed picture. 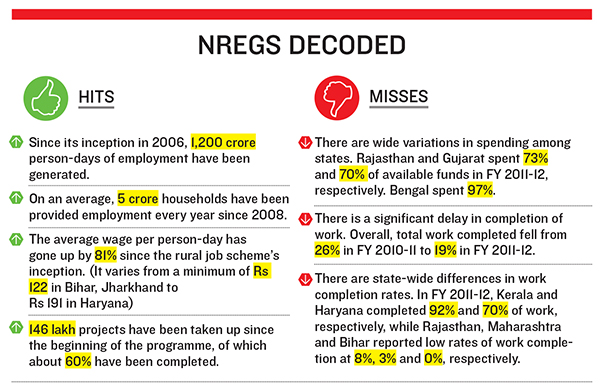 Manish Sabharwal, Teamlease CEO, for instance, believes that it has not been impactful enough for the crores spent on it. “There are other, more impactful labour market interventions which could have been done for the same money. Imagine if you had subsidised apprenticeship…Why wasn’t skill development a part of it?” In his opinion, there have been negative externalities like fuelling inflation and distortion of the labour market by raising wage rates for unskilled workers.

Even if MGNREGS has a positive impact on reducing poverty in the short term, it may not be the best way forward over the medium to long term. One of the most interesting studies done on MGNREGS is by Shamika Ravi of the Indian School of Business has proved this.

Ravi’s research, conducted over 1,066 ultra poor households (those with less than one acre of land, no male earning member, and no access to micro finance) in Andhra Pradesh’s Medak district over a period of four years starting 2007, found that in the first two years the initiative significantly improved food security, incomes, and financial inclusion. It also reduced migration by 70 percent.

However, into the third and fourth years, data over the same sample showed that MGNREGS hindered micro-enterprise development. Experiments have shown that nurturing micro-enterprises alongside MGNREGS work robs time off the latter, thus eating into the day’s wage.

“Our study shows that the 17 percent increase in incomes due to micro-enterprise (like rearing a cow and selling milk) is offset by a decline in the wage amount,” says Ravi. As a result, micro-enterprises are often junked in favour of MGNREGS work.

Even though it is limited, the study raises the question whether MGNREGS has a lasting impact on poverty alleviation.

Reetika Khera, professor at IIT Delhi, says that theoretically it does. “Imagine a poor man in Bihar who earlier had to come to Delhi with his family because there was no way to survive in his village. His kids did not get proper schooling and he exposed his family to numerous health hazards. Now he can sustain a family in his village, invest in his kid’s education etc.”

But Sabharwal has a contrarian argument. “You cannot think of poverty reduction without jobs. The view of district magistrate as job creator is not sustainable,” he says. Naysayers like him feel enough money has been wasted on the scheme but it is unlikely that it would be rolled back despite its shoddy implementation.

The way ahead appears confusing. The next best thing perhaps would be to stick to the 100-work-day schedule, and not increase it to 150, as activists have been demanding. “The more constructive way would be to look at what form MGNREGS can fit into in the current economic environment,” says Ravi.

Tweets by @forbesindia
Clicks versus Bricks: The Battle for the High Street
Scripps Networks Interactive Staying True to its Roots