NHAI projects linking Delhi and Mumbai are bucking the trend, getting the highest bids in the country 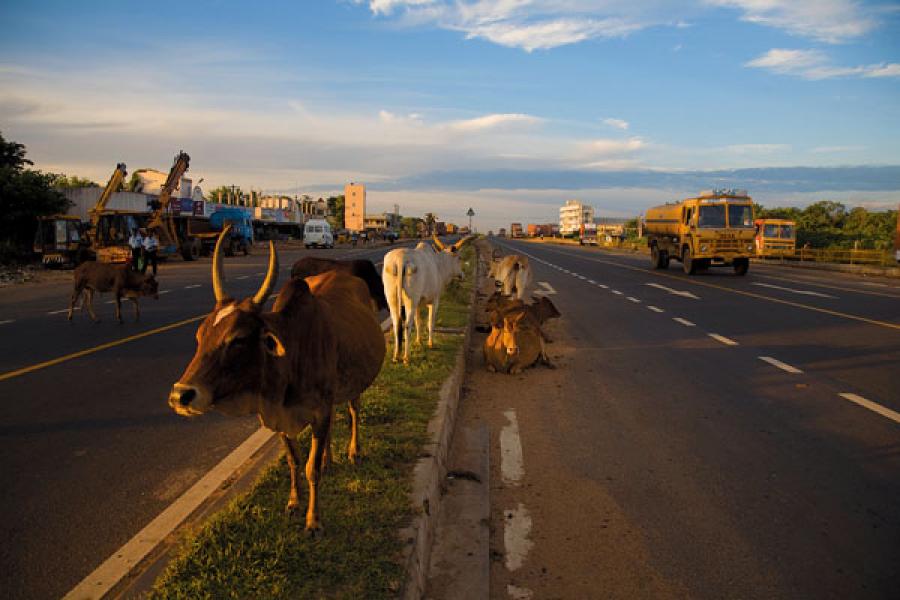 Image: Ed Kashi/ Corbis
Cows gather in the middle of the road along the Golden Quandrilateral highway near Chennai, India

DHRGM may read like the acronym of an upcoming Bollywood flick, but, in reality, stands for the states — Delhi, Haryana, Rajasthan, Gujarat, Maharashtra — through which runs the country’s most profitable stretch of highways.

On a map at the National Highways Authority of India office in Delhi, a red line runs from Delhi to Mumbai, marking out a new six-laning project. The 1,375 kilometres is one of the four arms of the Golden Quadrilateral — started during the Atal Bihari Vajpayee government in 1998 — that connects the four metropolitan cities in the country.

G. Suresh, the soft-spoken general manager of finance at NHAI, points to the red line and says:  “This is the platinum stretch of the Golden Quadrilateral.”

Suresh’s confidence stems from an NHAI bid last month, for six-laning a 550 km Kishengarh-Udaipur-Ahmedabad stretch. Ten companies responded, with every bidder willing to pay a premium of more than Rs. 300 crore for the next 26 years.

GMR, promising Rs. 636 crore a year and an escalation of 5 percent every year, won the bid. This means, GMR will pay a phenomenal Rs. 32,000 crore to NHAI for the concession period as premium, making it the authority’s highest grossing road project. GVK came second, with a bid of Rs. 560 crore.

The past few months have seen the NHAI ride rough weather. With minister Kamal Nath’s exit from the Ministry of Road Transport and Highways six months ago and the arrest of two senior NHAI officials by the Central Bureau of Investigation on charges of favouring a company, there has been a slowdown in awarding projects. Compared to the 5,600 km of highway projects that NHAI awarded last year, it has awarded only 3,000 km so far this year.

The slowdown also made bidders more selective about projects. But despite the gloom, companies such as Soma Enterprises, L&T and Isolux were willing to pay a huge premium for the Kishengarh-Ahmedabad project. Why?

Experts, and data, suggest that projects in India’s north-to-west corridor promise the highest toll revenues. Generally, a company suffers losses for the first five years and breaks even after that when it takes up an NHAI highway project on an equity internal rate of return of around 15 percent. However, on the Delhi-Mumbai routes, companies are expected to break even by the third year.

In the past two years, out of the highest premium received on bids, four of the top six bids were on the Delhi-Mumbai route. The NHAI will get close to Rs. 12,000 crore in premium on these projects over the next 20 years.

Ministry officials say the Delhi-Mumbai route will continue to lead toll revenue collections for at least another decade. “The traffic growth on the Delhi-Mumbai route is growing at around 8 percent a year, while it is around 6.5 percent in the rest of the highway network,” says a person privy to the traffic estimates put up in the Detailed Project Report by NHAI.

A 2007 McKinsey report says the Delhi-Mumbai sector tops a list of 10 routes with the country’s most dense freight traffic. It estimated that cargo vehicles notched up more than 39,610 million tonne-kilometres over a distance of 1,375 km in 2007. Thane-Chennai, Delhi-Kolkata and Delhi-Amritsar are the other routes that figured on McKinsey’s list.

“There are several projects in the south and the east where we are finding it difficult to get bids,” says Suresh.

Source:Mckinsey and NHAI
The Kishengarh-Udaipur-Ahmedabad project cost has been set at around Rs. 5,500 crore. NHAI officials estimate GMR would be sharing around 50 per cent of their revenues with the authority. GMR refused to comment on the project.

There are many reasons why companies are optimistic about this project. M. Murali, director general, National Highway Builders Federation says, “The Delhi-Mumbai Industrial Corridor and Gujarat’s aggressive industrial drive are indicators that this region will have a strong demand. Any player who wins a bid on this stretch would be optimistic.”

Truckers operating in the region say that its prospects are higher when compared to the south or the east of India. “The north-west is being developed as a logistical hub, as it is expected that a bulk of goods movement’ will be in this region,” says Mukesh Dave, a senior executive with the All India Motor Transport Congress. “Every manufacturer in the country is now stepping up to develop and expand warehouses along this zone, mainly in Gujarat, Rajasthan and Delhi.”