The Correlation between Money and Happiness

Does a higher income make people happier? The jury is still out on this 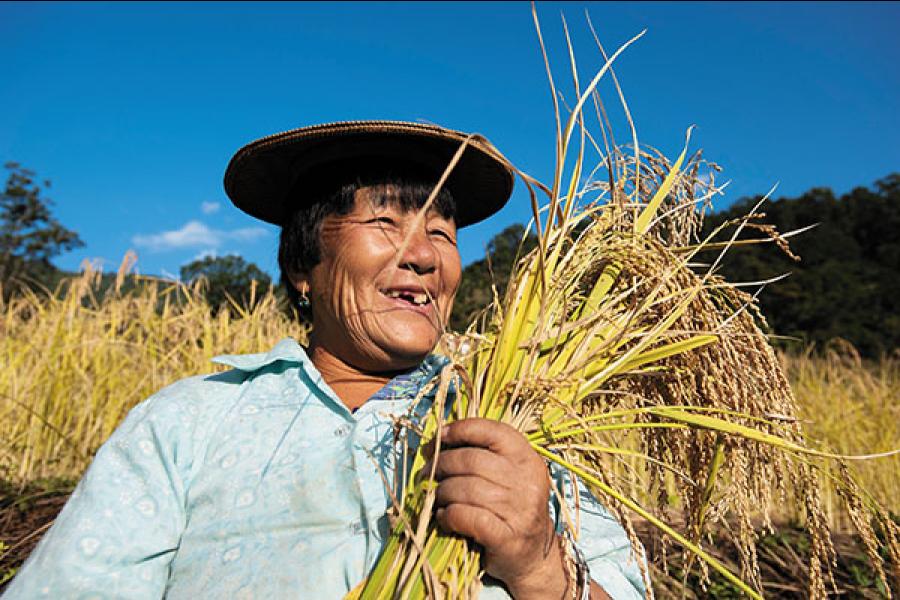 Image: Corbis
A rice farmer in Bhutan; Bhutan was the first country to institute Gross National Happiness as a measure of prosperity

Money and happiness have been married and divorced umpteen times by economists. A recent study by University of Michigan professors Betsey Stevenson and Justin Wolfers united moolah and mirth after Richard Easterlin, an economist and professor at the University of South Carolina, separated them in 1974. While the Easterlin Paradox stated that rise in income does not necessarily increase happiness, the new research refutes it by proving that the higher the income or the GDP (Gross Domestic Product), the more happy the person or the country is. No conditions apply.

Between the two polar studies, several researchers tried to bring money and happiness together by establishing a threshold till which they hold hands before parting ways. For instance, in 2003, British economist Richard Layard set $15,000 as the point beyond which money does not fetch happiness. In his 2005 work, Layard reset the point at $20,000 a year.

But on a macro level, what does the country’s GDP say with regard to the happiness-meter of its citizens?

Carol Graham, who is a senior fellow at the Brookings Institution, a nonprofit public-policy organisation based in Washington DC, and author of several books on happiness including Happiness Around the World: The Paradox of Happy Peasants and Miserable Millionaires, says GDP is a comprehensive indicator of happiness. “GDP per capita captures country-level unobservables such as freedom and governance, public goods, environment, etc, all of which matter a lot to well-being (economists’ term for happiness),” Graham says.

However, Terry Babcock-Lumish, a professor of social sciences at West Point, thinks the contrary. She says GDP rarely considers components of quality of life like pollution, crime, or how unevenly goods and services are enjoyed by a nation’s citizenry.

Perhaps for this reason, Bhutan, the first country to introduce Gross National Happiness (GNH) as a measure of prosperity, considers three factors besides socio-economic development to compute GNH: Cultural preservation, environmental protection and good governance. Sangay Dorji, programme officer at Bhutan’s GNH commission, says, “GDP is heavily biased towards increased production and consumption, regardless of the necessity or desirability of such outputs by continuously inducing people in labouring for higher income at the cost of relationships, peace and ecological stability.”

For Babcock-Lumish, GNH is a useful indicator as, along with other metrics like GDP and Consumer Price Index (CPI), it provides a more textured understanding of an economy. However, Graham says that of the above pillars, the top priority for the Bhutanese government is to boost the country’s economy as it will be the key to reducing poverty and improving health and literacy. “GNH emphasises environment, governance and culture but half their game is not that far off Gross National Product,” she says.

Many organisations conduct surveys across the globe and rank countries on the basis of happiness or aspects of it, calling them emotional well-being, prosperity and so on. The Gallup World Poll (used in most happiness surveys like Legatum Prosperity Index, UN’s World Happiness Report, etc) measures emotional well-being across 160 countries by asking its citizens five questions like “Did you smile or laugh a lot yesterday?”

In 1974, Easterlin measured life evaluation in his study, basing his research on open-ended questions on what people want out of life—what they would need for their lives to be completely happy. [The recent Stevenson and Wolfers research also measures life evaluation but they base it on a more closed question like “how does your life fare on a 10-point ladder where 1 is the worst and 10 is the best?]

According to Graham, open- and close-ended questions generate different responses. “A closed question is framed in relative terms for the respondent and answers to this question correlate more closely with income within and across countries than open-ended life-satisfaction questions,” she says.

Moreover, Graham adds that the ladder question used in the new study is the most framed life-evaluation question and is linked most closely to income.

The new study utilises Gallup data on the life-evaluation question and not queries on emotional well-being. Interestingly, Gallup rankings based on the latter parameters show that money doesn’t impact happiness, results that are contrary to the new study.

(Latin American countries like Panama top the rankings in the 2012 Gallup Poll, while Singapore languishes at the bottom. However, on the basis of their GDP per capita, CIA World Factbook ranks Singapore at 7, while Panama is way behind at 89).

Graham adds that life-evaluation questions that consider a longer time-period in a respondent’s life correlate more closely to income as it includes people’s ability to do what they want to do with their lives. In contrast, emotional well-being questions incorporate a shorter time-period (daily experiences) and are less associated with money because, after a point, money can’t make you smile more. This is probably why the study by Stevenson and Wolfer with the life-evaluation question, and that too a closed one, as its basis proved that money is married to happiness.

Tweets by @forbesindia
What Should Your Salt Intake be?
FMCG Stocks Impacted by Slowdown