Reviving the economy through capital spending should be top priority in Budget FY22; fiscal consolidation will have to wait 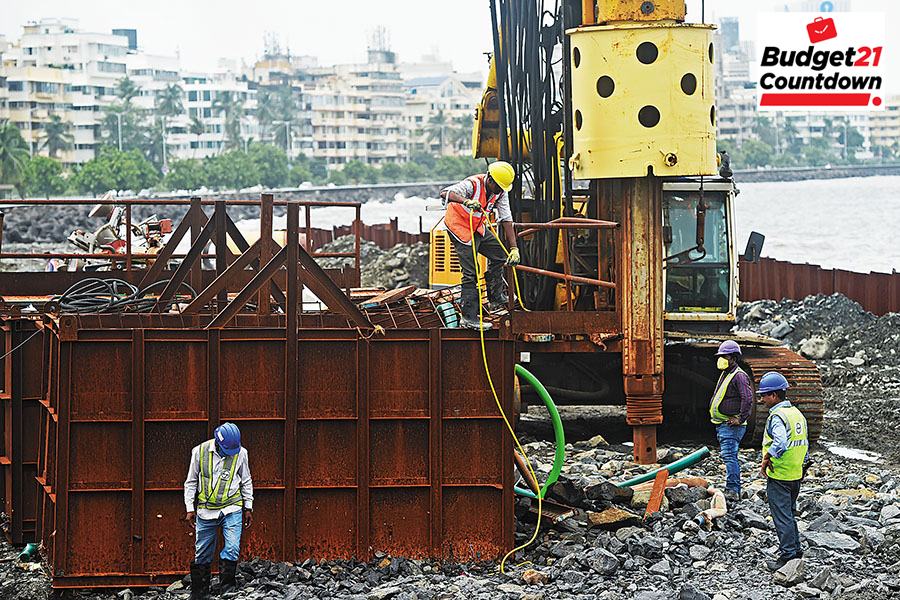 
As the impact of the pandemic recedes, Budget FY22 has its task cut out: Get growth back on track while laying out a roadmap to address a dire fiscal situation. It’s a fine balance that the government needs to get right. While at the very least it would set the course for the next 12 months, industry would also be looking to the Budget for clues for medium term policymaking for, say, the next five years.

As things stand, a sharp decline in revenue has prompted the government to meet the deficit through borrowings. In the financial year ending March 2022, the fiscal deficit for the central government is expected to touch 7 percent of GDP as compared to a planned 3.5 percent when Budget 2021 was presented. Add an additional 5 percent for the states as well as off balance sheet borrowing and the number gets to 13 percent of GDP.

According to economists, the key to reviving growth is government spending on capital assets that would have a multiplier effect on business economy. Roads, railways, ports and irrigation systems would boost output and get economic activity going. “You cannot consolidate on the basis of expenditure reduction. Instead spend more and use the multiplier effect of that to get higher tax collections,” says Abheek Baru, chief economist at HDFC Bank.

Needed: Aggressive disinvestment
Mopping up resources would be a key priority for FY22. One way to get money into government coffers is a robust disinvestment programme. While strategic company sales have been on the agenda for years, they take time and are often difficult to execute if markets dip. Going for a trigger price-based mechanism, where assets are identified and disposed of piecemeal once a certain stock price is hit, could be one way to go. Interested parties can then mop up shares from the open market as and when they become available.

While the intention is strong, the ground reality facing Minister of Finance Nirmala Sitharaman is a tricky one. The government may not be able to complete the Bharat Petroleum and Air India disinvestments in the current financial year. There are more disinvestments planned such as Shipping Corporation of India and BEML, but there is no clarity on the time-frame within which they can be completed. But there could be no better time than now.

The Life Insurance Corporation (LIC) initial public offering is emerging as the most-awaited event of 2021, but with amendments to the LIC Act required—and Milliman Advisors recently appointed to determine the embedded value of the financial institution—there is no clarity on when it could take place. 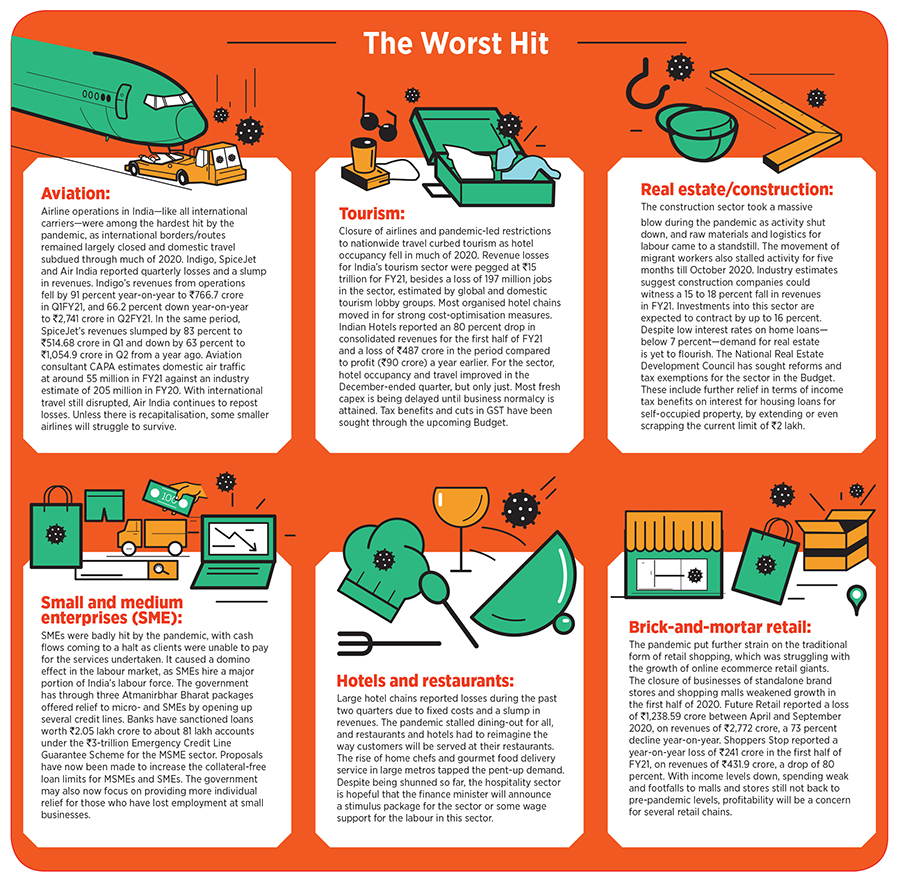 Individuals before companies
With consumer-facing sectors such as brick-and-mortar retail, hospitality, tourism and aviation among the hardest hit, expectations are once again high that the government will announce specific bailout packages for them. But nearly six months into the unlocking of the economy, it appears to be a hope rather than a reality.

In mid-2020 and later, Sitharaman announced packages to assist small and medium enterprises, including opening up credit lines through banks, payroll incentives, cash transfers and food security for the worst hit. Barclays’s chief India economist Rahul Bajoria has estimated that about 73 percent of the ₹21.4 trillion Atmanirbhar Bharat package had been used by mid-November 2020.

The starting position for FY22 from a Centre and state government perspective is not too great. The economy is recovering, hence calibrating spending will be a tricky proposition, particularly since inflation is rising again. One-off expenditures such as payroll incentives, direct cash transfer and food securities will drop, hence these will be savings for the government.

Also, last year, the government spent more towards building capacity for health care and quarantining centres. This will come down in the current Budget.

To boost revenues, the government may consider imposing a new Covid-19 cess or surcharge on high-income individuals in the Budget. There may also be an additional cess on petroleum and diesel.

Rashesh Shah, chairman of Edelweiss Group and also past president of the Federation of Indian Chambers of Commerce and Industry, says the government may opt for a universal basic income scheme for those who have lost jobs or been worst hit in the pandemic. “The government will focus on individuals rather than companies at this stage,” Shah says.

Shah is confident that India is eight to nine months away from the revival in the private capex cycle. Aditya Birla group firms UltraTech Cement and Hindalco have announced plans to resume their capital expenditure plans. These are early signals of the revival.

India is coming out of three down cycles: The first is the short-term down cycle of the impact of the pandemic, where we are now seeing a rebound in business and industrial activity. The second is the medium-term down cycle post the collapse of IL&FS when there was increased risk aversion towards lending and a credit crunch towards non-banking financial companies.

The third is the longer-term down cycle which started in 2013 in the form of deteriorating asset quality on banks’ balance sheets, over-capacity in real estate and regulatory changes in the form of the Goods and Services Tax and Real Estate (Regulation and Development) Act. “All the three cycles appear to have bottomed out at the same time and the capital markets are starting to reflect this optimism,” Shah says. The 30-share Sensex has risen by 87 percent since its low in March-end, to a record high of 48,782.51 on January 8.

Growth drivers
Manufacturing and real estate could also prove to be growth drivers. With supply chains moving out of China, the government has decided to support domestic manufacturing through tariff support as well as production-linked incentive schemes. Already, applications in sectors like electronics, steel, batteries, solar modules and textiles have shown an intent to get investment going.

Residential real estate—which has been comatose for the last seven years—has also seen buyer interest. This was primarily restricted to Maharashtra on account of a cut in stamp duties from 6 percent to 2 percent. “If housing-for-all has to be achieved, then taking care of home buyers through increased subvention, lower taxes and higher income tax rebates on home loans is the way to go,” says Niranjan Hiranandani, managing director, Hiranandani Group. If this happens at a time when home loan rates are low, the construction sector would get a fillip. He is hopeful that other states will follow Maharashtra’s example and also cut levies on the sector. The state has also slashed developer premiums by 50 percent.

The fly in the ointment could be the government becoming conservative in its thrust for growth. Statistically, India will be driving out of a technical recession by the middle of 2021. There could be some in the government who believe that aggressive spending might not be priority if growth—led by pent-up demand—continues to improve. The heavy lifting may then be left to the Reserve Bank of India (RBI) through monetary measures.

At the same time, there is a risk of inflation flaring up that could prompt the RBI to tighten monetary policy, which in turn could pull growth down. Once the Budget takes care of growth and gets companies to invest and individuals to spend, the focus is likely to shift to ensuring the supply side doesn’t let us down.

Tweets by @forbesindia
If poor countries go unvaccinated, a study says, rich ones will pay
How do u make someone smell through a screen? You don't