With the government finances weaker in the pandemic, the responsibility to revive growth will shift to the private sector. FM Sitharaman will, however, need to provide relief to individuals to encourage spending. 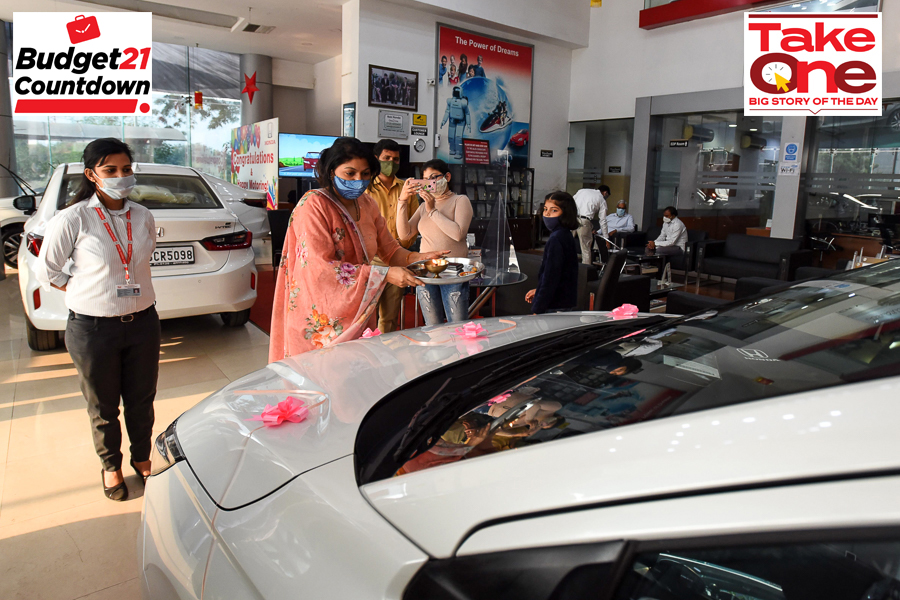 A family offers puja to a newly-bought  car at a car showroom in November 12, 2020 in New Delhi, India.
Image: Mohd Zakir/Hindustan Times via Getty Images

India’s finance minister Nirmala Sitharaman has always been keen on showing intent—whether it be through her first stimulus package in March last year to assist the poor and migrant workers through food security and cash transfers—or an "Atmanirbhar Bharat" package later in November, to incentivise jobs and boost the real estate sector. Come February 1, virtually a year since the first Coronavirus case was reported in India, there will be a need for even more intent. In 2020, the government finances deteriorated with revenues hit by lower collections in pandemic-induced lockdowns. The fiscal stimulus has meant more pressure on expenditure. So FY21 budget projections, from fiscal deficit to tax collections, are likely to be more disappointing.

"The upcoming budget thus becomes a slightly more important budget over the last 10 years," says Rahul Bajoria, chief India economist at Barclay’s. In this scenario, as like the previous year, the government will look to the private sector to drive growth. After all, corporate balance sheets have— thanks to the pandemic--emerged cleaner, leaner and stronger, due to a massive cost-cutting exercise by most, which has improved profitability and kept margins steady in the Q2FY21 quarter. They will have to bear the burden to kickstart business activity and job creation. Green shoots
There appear to be green shoots of private capex growth on the horizon. Edelweiss chairman Rashesh Shah is confident that India is 8 to 9 months away from the revival in the private capex cycle. Aditya Birla group firms UltraTech Cement and Hindalco have already announced plans to resume their capital expenditure plans. 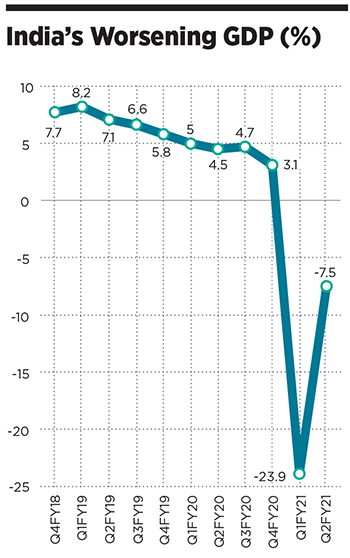 Bajoria also points that revival is not too far away; with performance-linked incentives announced last year by the government, there is interest being generated in smart phone manufacturing, solar electric power generation, electronic equipment and steel sectors.
As India’s business activity continues to improve since the unlocking of the economy in June last year, the services sector has been at the forefront of rapid recovery in growth. "But the delta has to be from the manufacturing sector for jobs. That was how the economies of Vietnam, Thailand and Indonesia experienced rapid growth," says Gaurav Rastogi, a banker-turned entrepreneur who founded Kuvera, a robo investment advisory firm, based in Singapore. Sitharaman will need to address the unemployment problem, particularly from the manufacturing standpoint. Recovery from job losses in the manufacturing sector in 2020 has been modest, data from the Centre of Monitoring Indian Economy (CMIE) shows. Manufacturing accounted for 40 million jobs in 2019-20. In the June-ended quarter this dropped to 24.6 million—and while it continued to improve marginally by December end—the shortfall is still quite high at 11.4 million jobs, CMIE director Mahesh Vyas says in a column on January 19. Encourage consumer spending
As the threat of new coronavirus cases continues to lessen across the country—from its peak in mid-September—business activity has started to improve after the festive season ended last November. From a crippling contraction of 23.9 percent in GDP in the June-ended quarter, the economy contracted 7.5 percent in the three months to September. The Reserve Bank of India (RBI) forecasts a marginal (0.1 percent) rise in real GDP growth for the December-ended quarter, it said in a January 21 report. With the nationwide rollout of Covid-19 vaccines on, people’s confidence and mobility has been on the rise in the past several weeks. But while online purchases have boomed, brick-and-mortar retail is yet to make a comeback to pre-Covid-19 levels.  Statistically, India is expected to climb out of a technical recession in mid-2021. But for durable growth to sustain, the government will need to encourage people to spend more in coming months. This becomes all the more critical for individuals who have either lost their job or seen a cut in salary due to the pandemic. Thus relief might come through income saving, in the form of tax exemptions under Section 80C or even raising the standard deduction limit, experts say. But Bajoria is not ruling out some nasty surprises in the form of some further taxation on capital gains, particularly since financial assets in the form of stocks have outperformed other asset classes in 2020. The benchmark stock market indices have risen nearly 90 percent from its March lows. But experts agree that it would be suicidal to introduce any type of pandemic-related cess or tax for individuals, in an attempt to boost government revenues. "At a time when direct money transfers are important, it would be terrible to try and generate revenues in this manner,” Rastogi said. Sharp fiscal deficit; disinvestment delays
Most economists peg the fiscal deficit for FY21 to double to at least 7 percent of GDP, against the projected 3.5 percent earlier. While this will be a cause for concern, as long as the government is able to finance the deficit at a reasonable cost, the extent of the worry will be limited. Sitharaman will need to address the shortfall in the disinvestment target. In last year’s budget, the government had set a target of ₹2.1 lakh crore. But it has managed only ₹17,957 crore. There is an urgent need to kickstart disinvestment in FY22 aggressively; but it will need to be done judiciously, where assets are disposed piecemeal once a certain stock price is hit.  Rastogi believes that a ‘disinvestment calendar’ triggers selling pressure in these stocks and the government never gets the best values. Divestment of its stake in BPCL and possibly a portion in Shipping Corporation of India could take place. While an initial public offering from Life Insurance Corporation (LIC) could give a fresh lease for the insurance giant and the stock markets, it might still be a while away. So it is quite likely that the government may lower its disinvestment target for FY22. Even while 2020’s disinvestment was negligible, the government is likely to earn incremental revenue of ₹1.4 lakh crore during the current fiscal year due to higher excise duties on petrol and diesel in 2020, a Crisil report says. No bailouts
The government has been smart in not bailing out the most ailing sectors—barring micro- and small businesses and the farm sector—hurt by the pandemic. Thus it is most likely that aviation, hospitality and tourism sectors will have to continue to find their own solutions for survival in 2021.   There could, however, be some hope for the construction/real estate sector, where work came to a standstill due to stoppages in labour and raw materials. The National Real Estate Development Council has sought reforms and tax exemptions for the sector, through tax benefits on interest for housing loans for self-occupied property, by extending the current limit of ₹2 lakh. Vishal Ratanghayra, CEO and director of real estate developer Platinum Corp said demand for both affordable and luxury housing has started to pick up in Mumbai and the NCR region. Any increase in the cap on interest for tax benefit would only see a boost to demand, Ratanghayra added. Sitharaman is promising a budget for India not seen in a 100 years. But in that rhetoric there is one element of truth: the budget papers will not be printed and will be presented in a complete paperless manner.  The hope is for no nasty surprises in the fine print.