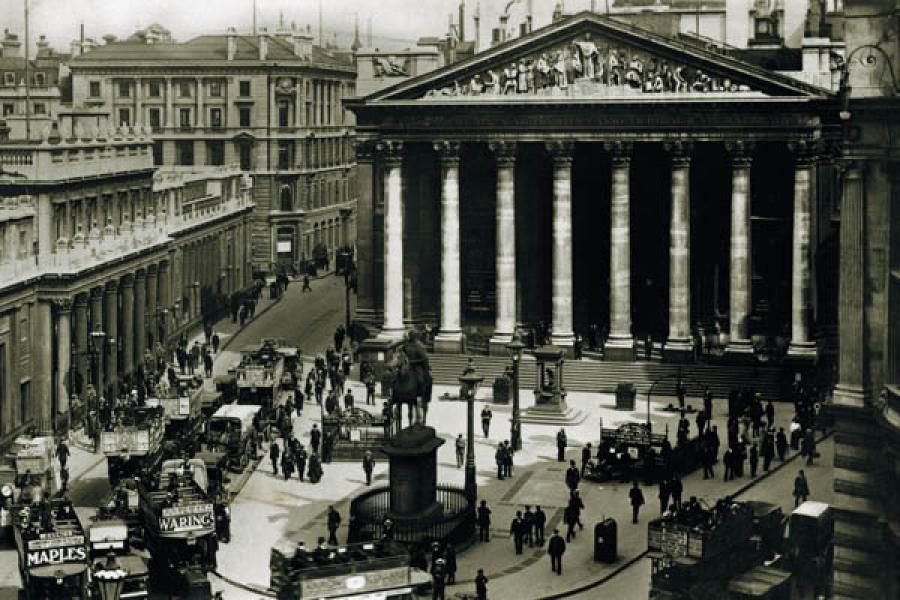 Image: Corbis
The Bank of England, sometimes called the ‘Old Lady’ of Threadneedle Street, is said to have issued the first government bond

The Bank of England issued the first ever government bonds in 1693 to raise money for a war against France. It was in the form of a tontine, an investment plan named after Neapolitan banker Lorenzo de Tonti. Although he is said to have invented the method in 1653—where a subscriber pays a sum into the fund and receives an annuity—it is also said that he modified existing Italian investment methods.

Banking activities can be traced to ancient civilizations, where banks gave grain loans to farmers and traders. Archaeological evidence points to banks in 2,000 BC in Assyria and Babylonia, ancient Greece, China, India and the Roman Empire. Greek and Roman lenders made two innovations: Accepting deposits and exchanging money.

Merchant banks, an early form of investment banks, were invented by grain merchants in Italy in the Middle Ages. These were meant to finance long trade journeys, but evolved to fund production and trade of grains. Jews fleeing Spanish persecution, and not bound by Church laws forbidding usury, began to give loans to farmers against crops in the fields (securing their sale rights), and underwriting (insuring) crops to ensure delivery to wholesale buyers.

JP Morgan buying out Carnegie Steel Company in 1901 is probably the first instance of private equity funding. But modern day private equity can be traced to Georges Doriot who founded American Research and Development Corporation by raising capital from institutional investors in 1946. It aimed to increase investments in businesses by World War II soldiers.

The creation of mutual funds has been traced to a Dutch merchant in 1774. Outside the Netherlands, London’s Foreign and Colonial Government Trust was the first mutual fund, established in 1868. It continues to trade on the London Stock Exchange.

The origin of hedge funds is difficult to ascertain, but it is known that similar tools existed during the bull market of the 1920s, prior to the Great Depression. Alfred Jones, a sociologist, author and financial journalist, coined the term ‘hedged funds’ and is often wrongly credited with creating the first hedge fund in 1949.

Commodity trading has roots in Sumerian civilization between 4,500 BC and 4,000 BC. Clay tokens—representing the amount of commodities, say the number of goats—were sealed in a clay vessel to represent a promise to deliver the goods. Later, tablets replaced the tokens. Complex gold and silver markets evolved in the classical civilisations.