This is the season to celebrate the killing of Ravan. Here’s a look at some great mythological villains from other parts of the world 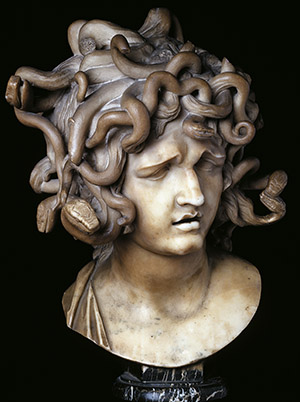 Medusa
A feared Greek gorgon, Medusa has been portrayed as having a hideous face with poisonous snakes instead of hair (although in later Greek mythology she has sometimes been depicted as a beautiful woman). Anyone who looked directly at her turned to stone. Medusa was killed by Perseus, who beheaded her by looking at her reflection on a mirrored shield.

Seth
The Egyptian god of deserts, storms, darkness and chaos, Seth has been portrayed as a usurper who killed his brother Osiris, and mutilated his body. Tales of battles between Seth and Orisis’ son Horus are popular in Egyptian mythology.

Ahriman
In Zoroastrian mythology, Ahriman is an evil spirit who, according to one tradition of belief, created all evil to counter all the good created by Ahura Mazda. He is also believed to find expression in humans through greed, lust and envy.

Lamashtu
This was the most feared among female demons in Mesopotamian religion. She was believed to kill children, harm mothers and pregnant women, drink the blood of men and chew on their flesh; she brought hunger and sickness, and destroyed rivers, lakes and foliage.

Grendel
This was a monster who, along with his mother, lived near the palace of Danish king Hrothgar. He terrorised the people by coming out of his lair at night and killing his victims. He was killed by the hero Beowulf, who ripped off Grendel’s arm with his superhuman strength.

Circe
Daughter of the sun god Helios and an ocean nymph called Perse, Circe possessed the knowledge of magical potions and could transform people she did not like into animals. In Homer’s Odyssey, she turned most of the men in Odysseus’ crew into pigs.

Mara
In Buddhist tradition, Mara is a tempter, who tries to seduce Gautam Buddha, while he was meditating, through visions of beautiful women. Mara is seen as the embodiment of passions that make humans stray from the path of a spiritual life.

Balor
In Irish legend, Balor of the Evil Eye was a giant with only one eye, and one leg. He was king of the Fomori race. When a child, the poisonous fumes of a druids’ concoction gave Balor’s eye the power to kill anyone it looked at. He was killed by his grandson Lugh, by a slingshot.

Tweets by @forbesindia
Zip Zap Zoom! Or Not Quite?
Book Review: India Grows at Night