In his latest book, Gurcharan Das argues that India is a land of private success in the midst of public failure

I had reviewed Gurcharan Das’ The Difficulty of Being Good, which I thought was brilliantly written; but his new book India Grows at Night is badly written and argued even worse.

The principal argument of the book is India is a land of private success and public failure, which one cannot disagree with at large, though there are substantial exceptions in both cases which Das conveniently glosses over. 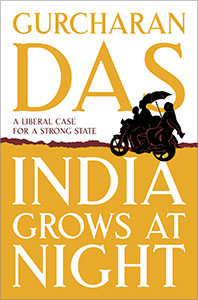 He states that the country’s IT sector grew because it was “without interference from the government”. This is as false a statement as there can be; a convenient economising of the truth that suits the flawed hypothesis of the book.

Many of India’s IT icons, including NR Narayana Murthy, have acknowledged that the sector could not have grown but for the government’s far-sighted vision in establishing the Software Technology Parks (STP) scheme, and granting concessional land linked to employment creation and self-certification on various kinds of compliance. Hence, Das’ thesis is completely wrong here and in several other places in the book, though a few examples like Vodafone are bang on.

The central visceral question, which he doesn’t ask, is this: How much of regulation is ‘good’, and when does it become ‘intrusive’, leading to rent-seeking?

There’s enormous evidence across the country of inept, insufficient and corrupt regulation, including the controlling of hazardous industries such as fireworks, food and drugs (India produces a large share of the world’s fake drugs with about 35 percent of those in circulation being fake, according to one estimate), chit funds and unsafe diagnostic labs to name a few.

India has one of the lowest numbers of public servants per one lakh of population, making coverage almost impossible for all services.

Thus, if there’s a fire in Sivakasi (as there once was), there’s a hue and cry on how the government is lax; and if an honest inspector enforces the law (as draconian as it may be), there will be another hue and cry about the return of the Licence Raj by the very same intellectuals and armchair theorists.

In a nutshell, while one cannot disagree with the broad general thesis of India being a case of private success in the midst of public failure, there are significant exceptions to both that the book glosses over. The central argument is simplistic and flawed, more a hurriedly put together collection of newspaper articles rather than a rigorously argued work that one would expect from someone of Das’ intellect.

Disclaimer: The author is an IAS officer. Views are personal.
Twitter: @srivatsakrishna