In the high-altitude desert of Ladakh, a quiet genius is attempting to solve a water problem: By building stupas made of ice 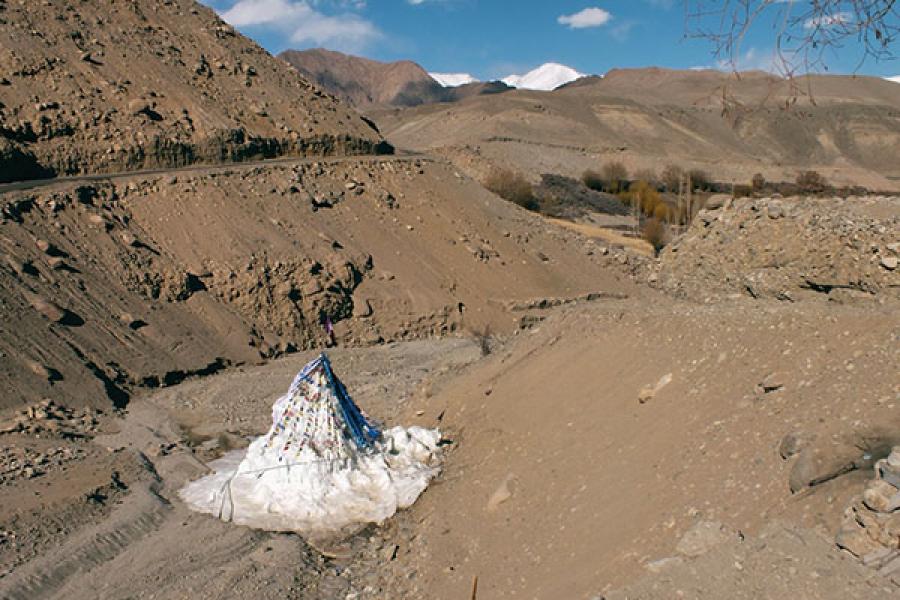 In Raju Hirani’s mega hit 3 Idiots, Aamir Khan’s character Rancho turns out to be an unconventional teacher in Ladakh, who is also a brilliant inventor, Phunsukh Wangdu. The inspiration for that character, many say, is a gentleman called Sonam Wangchuk, but this is not acknowledged in the film’s credits.

On pressing him, Wangchuk says he met and chatted with Khan and his team in 2008, a few months before the film’s shooting began, at a CNN-IBN event, Real Heroes, which honoured Wangchuk and screened a short film on him and his work. (CNN-IBN is part of Network 18, the publishers of Forbes India.)

He says there are many similarities between the Rancho/Phunsuk character and his own life though the movie does not credit him in any way. He did not communicate this when the film released—“they might think I was asking for money, especially in view of the huge controversy with Chetan Bhagat over credit”—but he wrote to Khan and the producers two years later. They haven’t responded yet.

Wangchuk, 48, has put that behind him. He has way too many other things to do.

A mechanical engineer by training, an educator, a founder of SECMOL (Students’ Educational and Cultural Movement of Ladakh) in 1988, a 2002 Ashoka Fellow, Wangchuk is no mean innovator. The SECMOL Alternative Institute (SAI) campus, for instance, is designed to conserve heat, and uses solar energy. They burn no fuels to keep warm even in the bitterly cold winters.

He has also designed a low-cost water heater, and has pioneered organic farming and low-cost greenhouses, making the campus practically an oasis in that high-altitude desert. His students and he have developed things like mud pipes, literally dirt-cheap, and a variety of solar-powered devices.

They aren’t resting on their laurels. In January 2014, Wangchuk and his students began work on a test project that aims to tackle a very serious issue. Climate change, with the result of shrinking glaciers, could have catastrophic effects on the life of the people of Ladakh. Spring melts have slowed now, and with hotter summers, the melts are much faster and stronger: Which means that farmers get too little water in spring, and too much in summer. Traditional methods like check dams can help, but some fresh thinking is also needed.

Wangchuk had learnt of techniques like ‘glacier grafting’, which attempt to grow glaciers artificially, and had studied the work of a Ladakhi civil engineer, Chewang Norphel, who had been working on storing water in vast ice fields. The problem with these methods, Wangchuk says, is that they require special locations, where the ‘glaciers’ can be shielded from the sun by the bulk of higher mountains, and also that they require strenuous work to maintain. 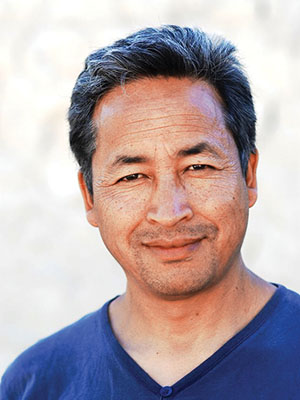 What if he could reduce the surface area, thereby reducing the melting? The most pragmatic shape: A cone, a large base, tapering to a point. To build one, they would need to be able to spray water down from a height. To do this, they used gravity, bringing the water in via pipes from streams at high altitudes. Then, in the freezing cold air, as the water sprinkled out of the pipe, it froze, and formed a cone. Their prototype was 6 metres high, holding 150,000 litres of water captive. The snow and ice around it had melted by the middle of March. They expected their cone to last until the end of April. But it survived until May 18, when temperatures were in the high 20s.

Serendipitously, the cone resembles a stupa, the dome-shaped structure sacred to Buddhists, and Wangchuk and his team cannily named it the Ice Stupa, and adorned it with prayer flags, as is the custom with more traditional stupas. These flags, not coincidentally, performed the additional duty of providing the structure with a little more shade and protection from wind.

They then took the experiment to the next level. On October 13, they launched the Ice Stupa Artificial Glacier Project, to build a field of stupas.

While the local people are doing the work, the project is seeking global participation, through a crowd-funding campaign. As the appeal notes, “It only makes sense to invite global contribution to help solve the problems we are facing here in the mountains, since whether we like it or not, we receive more than our fair share of the impact of your other global (warming) contributions.” That line ends with the emoticon ‘:P’ (a cheeky gesture of a tongue stuck out). Work has already started on the preparation of the site and the laying of the supply pipes. They’re laying conventional PVC pipes side-by-side with experimental mud pipes (another Wangchuk idea). The stupas themselves have started coming up in December, and will continue to grow until February.

The project budget is $100,000, but the appeal target is a shade under $120,000, to cover bank charges, and the rewards and incentives that a crowdfunding campaign usually has. If it catches the world’s imagination and goes over its target, the team has pledged to use the amount for further research on climate change.

As this issue goes to press, the project has raised close to half its goal, and would have closed by December 22. (See indiegogo.com/projects/ice-stupa-artificial-glaciers-of-ladakh or @icestupa . Or email icestupa@gmail.com.) But support is still welcome, via other methods, listed on their new site, icestupa.org .

And volunteers who want to join in on the physical task are also welcome. Be prepared, however, to face -15°C temperatures.

Tweets by @forbesindia
India has the potential to become a $10 trillion economy
Engage: Events and books to begin the year with