Outbreaks could still flare up even after the worst seems to be over, dashing hopes that economies can be restarted quickly. In China, a new outbreak could be particularly dangerous 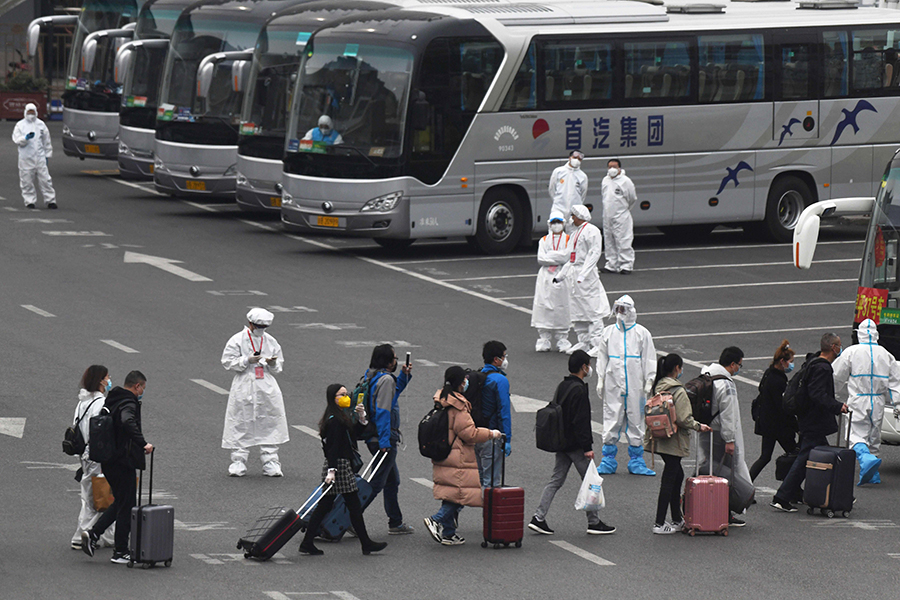 Travelers arriving from Wuhan make their way to buses which will take them to their quarantine locations, at Beijing West Railway Station on April 15, 2020. - Beijing has virtually walled itself off to outsiders with drastic measures to protect China's seat of power against the threat of a second wave of coronavirus infections from other regions.
Photo by GREG BAKER/AFP via Getty Images

Chinese officials have imposed new limits on movement in some northern parts of the country following a spate of new coronavirus infections, in a sign of how difficult it will be to fully recover from an outbreak that virtually paralyzed the country.

The restrictions imposed over the past week include the city of Harbin, a city of 10 million in northeastern China where a number of new infections have been reported. Other cities in the region have also imposed restrictions, which include preventing outsiders from visiting other neighborhoods and warning residents to stay away from high-risk areas.

The new limits came after the authorities reported dozens of new infections, according to Chinese state media, all of which experts said were linked to the return of Chinese nationals from Russia and the United States. Though the numbers officially disclosed have been modest so far, it is not clear that the spread has been entirely contained.

The restrictions do not go as far as the lockdowns that paralyzed Wuhan, the city where the coronavirus outbreak emerged, and then spread to much of the rest of China, bringing the world’s No. 2 economy to a virtual halt. China is gradually reopening its factories and offices and lifting travel restrictions in an effort to get back to normal.

Still, the prospect of more outbreaks illustrate how daunting that task will be, both for China and for other countries.

Outbreaks could still flare up even after the worst seems to be over, dashing hopes that economies can be restarted quickly. Flare-ups could be the new normal, at least until a vaccine or other preventive measures have been developed, leading to a spate of testing and reimposing harsh social-distancing rules. Limits on crossing international borders could remain for a long time.

In China, a new outbreak could be particularly dangerous. In much of the country, life has mostly gone back to normal, public transportation is crowded and restaurants have reopened. Under such conditions, even if most people wear masks, the virus could spread easily.

Officials have stopped short of cutting off Harbin, a city of 10 million where the outbreak has been most severe. Instead, new rules have served as a stopgap. The city said earlier this week that neighborhoods should prevent outsiders from entering.

Nearby cities took their own measures. The city of Qiqihar barred outsiders from visiting neighborhoods and warned residents against traveling to at-risk areas, including Harbin.

In practice, the rules did not seem to be fully enforced. Forest Shen, a resident of Qiqihar, said restrictions dictating who could come and go from residential building complexes were relatively strict, and deliverymen were not allowed to enter. Still, Shen said, he had no problem hosting a relative who came to his apartment.

Another city, Hulunbuir, in the Inner Mongolia region, said on Monday that it had confirmed one infection there related to the spread in Harbin. One hotel in the city, the Hulunbuir Friendship International Hotel, had taken matters into its own hands, saying in an online advertisement that it would not accept guests from neighboring Heilongjiang province, of which Harbin is the capital.

While the area has dealt with a number of cases resulting from people traveling across the border from Russia, authorities said the outbreak in Harbin could be traced back to a woman who flew to China from the United States in mid-March, and that it had also spread to nearby Liaoning province.

Officials tested the woman four times, and each time the result came back negative. Later, after she had given the virus to her neighbor, she was confirmed to have been infected. Thus far, the outbreak has spread to at least 78 people, according to the authorities.

China’s state media said many of the cases came from two hospitals in Harbin, where a patient with the virus was not properly isolated. The disease then spread among health care workers, patients and medical aides who gathered in the hospital’s corridors to talk. Officials closed the hospital for disinfection and issued new rules barring visits to hospitals.

Zeng Guang, the Chinese Center for Disease Control and Prevention’s chief epidemiologist, told state media this week that the testing failures served as a warning, and that it wasn’t clear why the virus in this case was so difficult to detect yet spread so easily.

Harbin officials said 2,000 people connected to the hospital, including medical staff, inpatients and those who had left within the past two weeks, had been tested. Roughly 400 were under either concentrated or home quarantine. A broader second round of testing is also underway. One news report from nearby Qiqihar said that 4,106 people who had been to one of the two hospitals in Harbin were slated to be tested.

A surge of Chinese returning from Russia has presented another problem for the region. On April 10, an Aeroflot flight from Moscow to Shanghai carried 60 people who ultimately tested positive for the coronavirus. The passengers were all quarantined.

That flight arrived just days after China said it would close its last overland crossing at Suifenhe, a small city across the border from Russia’s Far East. In early April, the city began tracking the comings and goings of local residents and barred outsiders from visiting neighborhoods.

Many Chinese people seeking to leave Russia have flown from Moscow to Vladivostok in hopes of completing the last leg by land. The Chinese Consulate in Vladivostok said in a statement earlier this week that 370 Chinese citizens infected with the coronavirus had already crossed the border.

So many cases have emerged in the borderlands that the local government has opened a temporary hospital to deal with the caseload.

Tweets by @forbesindia
This is the time for IT services to reinvent business models, say analysts
Trump's $1 billion coronavirus hit