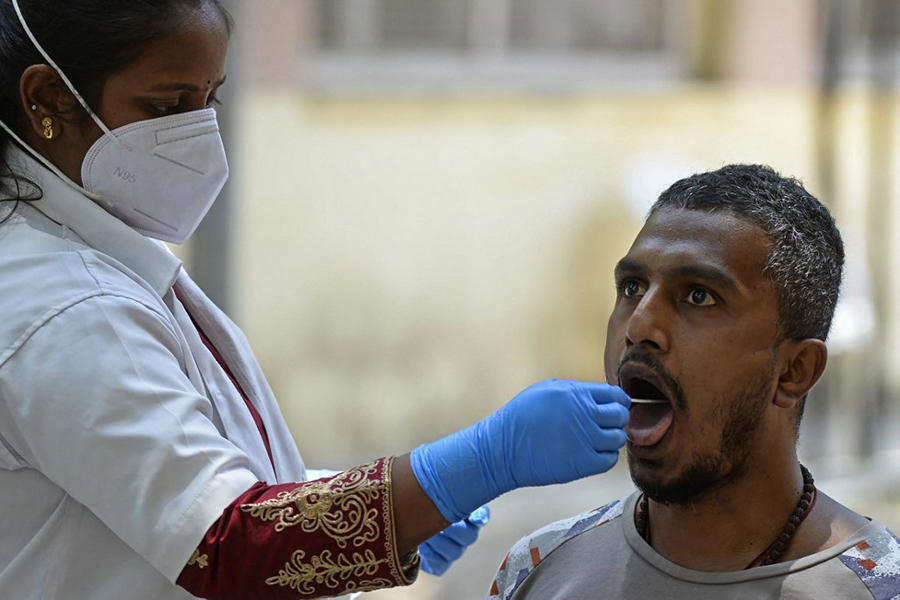 A medical worker takes a swab sample of a man for a Reverse Transcription Polymerase Chain Reaction (RT-PCR) test for the Covid-19 coronavirus screening at a testing centre in Hyderabad.
Image: Noah Seelam /AFP

"If I get tested positive, I won't be allowed to step out of my home, and they (employer) won't pay for my quarantine leaves. What is the point of testing if I cannot feed my family?" grumbled a 52-year-old symptomatic construction worker in Hyderabad.

With around 16.3 million confirmed cases and 187,000 fatalities (as of April 28, 2021), India is one of the world's worst-hit nations in terms of COVID-19 spread. Given the impending vaccine shortage and ~3.7 times higher daily case peak in the second wave than the first wave, it is imperative to contain the COVID-19 spread via thorough testing. While the ramping-up of testing capacity increases testing availability, it alone is not enough. The uptake dynamics at the demand-side dictate what proportion of the available capacity gets utilized and, therefore, need to be carefully looked at. The authors share their insights on the demand-side barriers to COVID-19 testing uptake, i.e., identify reasons people may not want to get tested. A comprehensive understanding of the uptake barriers can help public health leaders and healthcare providers craft suitable communications and interventions to improve the overall testing figures.

Before one proceeds to get tested comes a crucial prerequisite: developing willingness toward testing. Various factors impede a person's willingness to get tested. First, insufficient knowledge about the seriousness of the disease's spread and the health consequences is widespread. This lack of knowledge also increases susceptibility to fake news. Second, the social stigmatization of symptomatic prospects by relatives and neighbors begets testing avoidance. During the first wave, several state governments pasted stickers on doors and set up barricades to identify and isolate households with COVID-19 positive cases, resulting in undesirable consequences of social stigmatization, social isolation, and ultimately testing avoidance. To date, people are afraid of being labelled as "prospective positive" by their social circle. The second barrier is not entirely exclusive of the third – an innate fear to get tested, not necessarily of the test itself (for instance, pre-infected swabs) but also of its consequences if it results positive (for instance, hospitalization). Moreover, people do not want to carry the guilt of transmitting the virus among the family if tested positive. Trepidation toward the degree of scrutiny from the health departments can be seen in several media highlights.

Migrant workers in rural Bihar, terrified that police officers would take them away, showed violence against health workers who reported them as positive. Anecdotal rumours and falsified information amplify such fears. The blue-collar workforce, commonly employed as daily-wage, also fears job loss if declared COVID-19 positive. There is also a prevalent fear of visiting healthcare practitioners and laboratories to get tested due to the prospects of increased viral load at the testing premises. Fourth, a mismatch between perception and reality of COVID-19, fueled by the factors mentioned above, often leads to erroneous testing decisions. People often use rumours and their own stories to fill the gap between the statistics and their understanding, displaying a biased outlook.

In addition to the willingness-associated barriers discussed above, there exist several action-associated barriers that hinder the translation of willingness to uptake (the end goal). Incomplete knowledge about testing logistics - registration process, testing location, test types, test costs, etc.- plays a significant role in discouraging uptake. Home-collection provisions are limited. Long-distance to the center stands as a barrier, especially for those in remote locations. Unaffordability is also often cited as a bottleneck in improving testing rates in low- and middle-income countries, such as India. While COVID-19 testing services in government facilities in several Indian states are provided free of charge, the majority of the population prefers the private sector for seeking healthcare services. While the cost for the gold standard considered RT-PCR test has come down significantly from over INR 3,000 in the early days of the pandemic to less than INR 650 now, the price point in the private sector still stands unaffordable for on-demand testing. Hassle costs, i.e., non-monetary inconveniences such as high queue wait time to get tested, high turn-around-time for results, lack of convenient timeslots for testing, and unfavorable attitudes, absenteeism, and non-availability of medical professionals further dampen the uptake rate.

The meticulous efforts by the central and the state governments, the private sector, and various NGOs in increasing testing capacity have significantly improved supply availability. The attention needs to now also focus on addressing the demand-side barriers to testing uptake. In addition, the barriers to testing uptake vary significantly across India's diverse demographics and vast geographies. For instance, roughly speaking, while overcrowding at test centers impedes urban testing uptake, a long commute to test centers without public transportation facilities discourages testing in rural areas. A rigorously designed research is required to understand the extent to which each of these barriers impacts uptake across each demography and geography. There is no-one-size-fit-all intervention to improve testing uptake rates. We instead need a multi-pronged, differentiated approach in designing interventions based on a deep empathetic understanding of how the target population thinks, responds, and behaves to the notion of getting tested.

The authors are Analysts at the Max Institute of Healthcare Management, Indian School of Business.

Tweets by @forbesindia
Elderly or in Covid-19 quarantine? These cyclists will pick up your daily essentials
Photo of the Day: Jugaad