Infections much higher than reported cases in US: Study

The study indicates that even the hardest-hit area in the study — New York City, where nearly 1 in 4 people has been exposed to the virus — is nowhere near achieving herd immunity 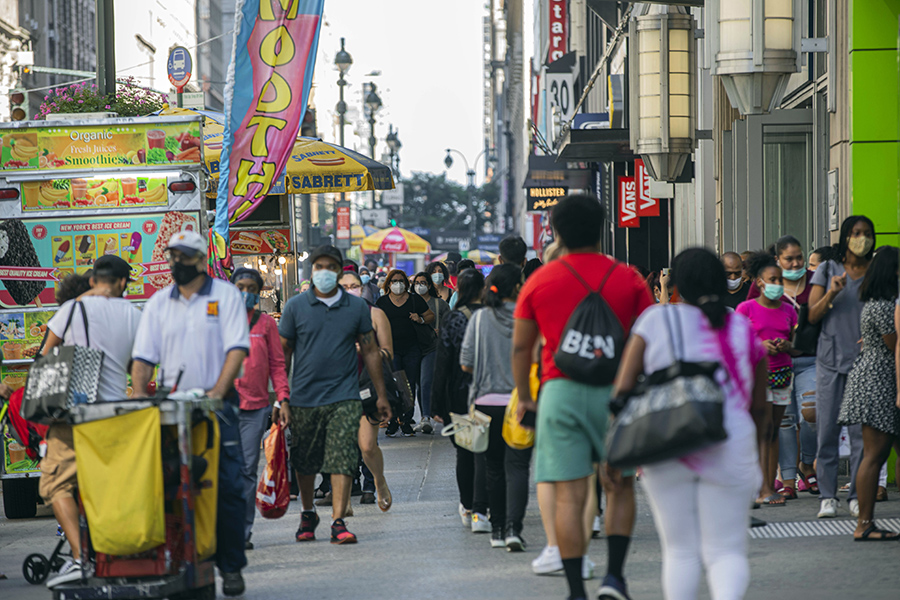 Pedestrians on West 34th Street in Manhattan on Saturday, July 18, 2020. Even the hardest hit areas of the U.S., like New York City, are far from numbers approaching herd immunity to the coronavirus.
Image: Hiroko Masuike/The New York Times

The number of people infected with the coronavirus in different parts of the United States was anywhere from two to 13 times higher than the reported rates for those regions, according to data released Tuesday by the Centers for Disease Control and Prevention. The findings suggest that large numbers of people who did not have symptoms or did not seek medical care may have kept the virus circulating in their communities. The study indicates that even the hardest-hit area in the study — New York City, where nearly 1 in 4 people has been exposed to the virus — is nowhere near achieving herd immunity, the level of exposure at which the virus would stop spreading in a particular city or region. Experts believe that 60% of people in an area would need to have been exposed to the coronavirus to reach herd immunity. The analysis, based on antibody tests, is the largest of its kind to date; a study of a subset of cities and states was released last month. “These data continue to show that the number of people who have been infected with the virus that causes COVID-19 far exceeds the number of reported cases,” said Dr. Fiona Havers, the CDC researcher who led the study. “Many of these people likely had no symptoms or mild illness and may have had no idea that they were infected.” About 40% of infected people do not develop symptoms, but they may still pass the virus on to others. The United States now tests roughly 700,000 people a day. The new results highlight the need for much more testing to detect infection levels and contain the viral spread in various parts of the country. For example, in Missouri, the prevalence of infections is 13 times the reported rate, suggesting that the state missed most people with the virus who may have contributed to its outsized outbreak. Havers emphasized that even those who do not know their infection status should wear cloth face coverings, practice social distancing and wash their hands frequently. The researchers analyzed blood samples from people who had routine clinical tests or were hospitalized to determine if they had antibodies against the coronavirus — evidence of prior infection. They had released early data from six cities and states in June. The study published in the journal JAMA on Tuesday expands that research by including four more regions. They also posted data from later time periods for eight of those 10 sites to the CDC’s website Tuesday. The results indicate that in vast swaths of the country, the coronavirus still has touched only a small fraction of the population. In Utah, for example, just over 1% of people had been exposed to the virus by early June. The rate was 2.2% for Minneapolis-St. Paul as of the first week of June, 3.6% for the Philadelphia metropolitan region as of May 30 and 1% for the San Francisco Bay Area as of April 30. In some regions, the gap between estimated infections and reported cases decreased as testing capacity and reporting improved. New York City, for example, showed a 12-fold difference between actual infections and the reported rate in early April, and a 10-fold difference in early May. “This is not coming as a shock or surprise to epidemiologists,” Carl Bergstrom, an infectious diseases expert at the University of Washington, said in an email. “All along, we have expected that only about 10% of the cases will be reported.” Tracking the numbers over time can provide useful insights into the virus’ spread and about a region’s capacity to cope with the epidemic, other experts said. “The fact that they’re sort of marking it out over time and looking at it over a longer duration will actually be super-informative,” said Dr. Rochelle Walensky, a researcher at Harvard University who wrote an editorial accompanying the JAMA paper. For example, South Florida ticked up to 2.9% as of April 24 from 1.9% just two weeks earlier. Missouri’s numbers barely budged from 2.7% as of April 26 to 2.8% as of May 30. Numbers for both regions are likely to be much higher in the next round of analyses because of the surge of infections in those regions since those dates. New York City showed the biggest leap in its rate, from 6.9% as of April 1 to 23.3% as of May 6, consistent with its outbreak. The city’s estimate closely matches the 22.7% prevalence found by a state survey, which tested patrons in supermarkets from April 19 to 28. Some experts criticized the state survey at the time because people shopping during the lockdown were more likely to be young, or might have recovered from illness and felt safe. “These consistent results offer mutual support to two very different methods used,” said Eli Rosenberg, an epidemiologist at the State University of New York at Albany and lead author of the state study. The CDC study also has limitations, Walensky said, because many of the people who ventured out during the lockdowns for tests or were hospitalized would have been severely ill and might not have been representative of the general population. Each region also varied “in terms of where they were on their own epidemic curve and varied in terms of the amount of testing that they did,” she said. The study also did not collect data on race, ethnicity, diagnostic and symptom history or prevention behaviors, Rosenberg said. “The approach used in the grocery store study allows for these data collections by pairing the specimen collection with a survey,” he said. Still, experts said the findings were valuable, despite limitations. “This population may not be exactly representative of the population as a whole, but the hope is that it is close enough to allow us to draw meaningful conclusions,” Bergstrom said. Several recent studies have suggested that antibody levels, especially in people with mild or no symptoms, may quickly decline. If that’s true, surveys like the CDC’s might reflect only people who were infected within the previous two to three months, Rosenberg said, “and complicate interpretation of results over time.”