AstraZeneca and Johnson & Johnson pledged to produce hundreds of millions of doses of their vaccines at no profit to themselves. Moderna, however, which has been granted $483 million to develop its product, made no such promise 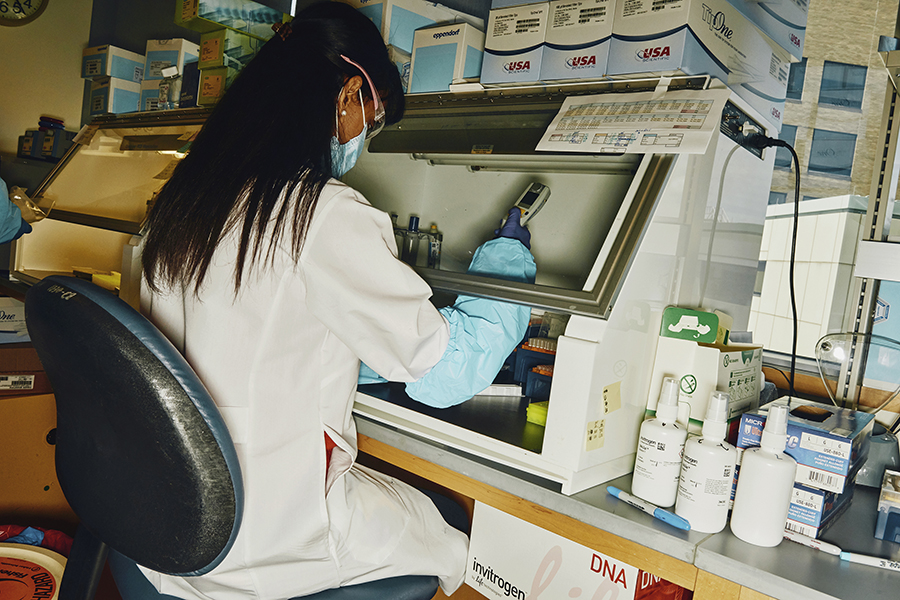 A scientist works at the Center for Virology and Vaccine Research in Boston on May 19, 2020. In Boston and in the Netherlands, scientists are racing to build a vaccine against the virus strangling the world
Image: Tony Luong/The New York Times

Executives from four companies in the race to produce a coronavirus vaccine — AstraZeneca, Johnson & Johnson, Moderna Therapeutics and Pfizer — told lawmakers on Tuesday that they are optimistic their products could be ready by the end of 2020 or the beginning of 2021. All four companies are testing vaccines in human clinical trials. Three of the firms — AstraZeneca, Johnson & Johnson and Moderna — are getting federal funds for their vaccine development efforts. AstraZeneca and Johnson & Johnson pledged to the lawmakers that they would produce hundreds of millions of doses of their vaccines at no profit to themselves. Moderna, however, which has been granted $483 million from the government to develop its product, made no such promise. “We will not sell it at cost,” said Dr. Stephen Hoge, the president of Moderna. Many Democratic lawmakers have argued that federal funding for vaccine development should include provisions to guarantee affordability and guard against profiteering. At the congressional hearing Tuesday, some House members raised concerns about Pfizer’s decision to reject federal funds, suggesting it could lead to price-gouging and a lack of transparency. “We didn’t accept the federal government funding solely for the reason that we wanted to be able to move as quickly as possible with our vaccine candidate into the clinic,” said John Young, Pfizer’s chief business officer. “We’ll price our potential vaccine consistent with the urgent global health emergency that we’re facing,” Young said, adding that “a vaccine is meaningless if people are unable to afford it.” Rep. Raul Ruiz, D-Calif., also questioned whether failing to address the financial stakes of vaccine development early on could keep these products out of “the hands of the people that need this most.” “I don’t want to look back, and then have health equity be an afterthought,” said Ruiz, who is a physician. “It has to be prioritized.” The hearing held by members of the House energy committee’s oversight panel was punctuated by notes of optimism from executives from each company, several of whom referred to promising early results from studies in people. On Monday, AstraZeneca and Pfizer released data indicating that their vaccines could stimulate strong immune responses with only minor side effects. Still, the actual effectiveness and durability of these responses against the virus have yet to be determined. No vaccine candidates have been proven effective for preventing infection by the coronavirus, or for protecting people from the severe effects of COVID-19, the disease caused by the virus. Panel members pressed the company executives for a commitment to maintain the highest standards for a vaccine, and not sacrifice quality for the sake of expediency. An ideal vaccine, several committee members stressed, would not only be safe and effective, but also be straightforward enough to manufacture en masse and available to the public at low cost. “It is possible that a COVID-19 vaccine may become available by the end of this year or early next year,” said Rep. Diana DeGette, D-Colo., the panel’s chair. “That’s a rare bit of good news in this harrowing time.” But, she added, “we must remind ourselves that plenty can still go wrong. And so the anticipated timeline is not guaranteed.” A fifth contender, Merck, painted a far less rosy picture of the vaccine development landscape. Dr. Julie Gerberding, the company’s executive vice president and chief patient officer, made no promises about when its product would be ready, citing concerns about safety should the process be rushed. “We do not expect to be able to accelerate the safety assessment,” Gerberding said. Merck’s chief executive, Kenneth Frazier, has previously cautioned against coronavirus vaccine hype and warned that a hurried approval process could damage prospects for protecting the public. In a statement released on June 30, the Food and Drug Administration noted that any vaccine candidate vying for approval would need to prevent or ameliorate disease in at least 50% of the people who received it. Manufacturers won’t have a good sense of these metrics until the completion of so-called Phase 3 clinical trials, which enroll thousands of participants — some of whom are vaccinated, some of whom aren’t — and track their infection status over the course of multiple months. Federal approval isn’t the only goal of vaccine development, the executives said. Once this milestone is met, the vaccines will still need to be administered widely and also be accessible to a range of populations — particularly those that have been disproportionately affected by the virus. Those would include the elderly, people with underlying medical conditions and Black, Latino and Native Americans. In written statements to the panel, AstraZeneca, Johnson & Johnson and Pfizer reaffirmed their commitment to diversity in their vaccine development pipelines to ensure that these vulnerable communities will also benefit from their products. Dr. Macaya Douoguih, who is head of clinical development and medical affairs of Johnson & Johnson’s Janssen Vaccines, said at the hearing that her company would be leveraging its past experience with community outreach, noting the importance of equipping higher-risk populations with accurate information about the disease. And Hoge, of Moderna, said that his company is actively enrolling people “representative of the diversity of America” into Phase 3 trials. The subcommittee also stressed the importance of worldwide distribution of any vaccines proven effective against the coronavirus to ensure global health. “None of us are safe until all of us are safe,” Young said.

Tweets by @forbesindia
Photo of the Day: Delhi sees heavy rains
Infections much higher than reported cases in US: Study