Unlike some of its competitors, Johnson & Johnson's vaccine does not need to be frozen and may require just one shot instead of two

By Carl Zimmer and Katie Thomas 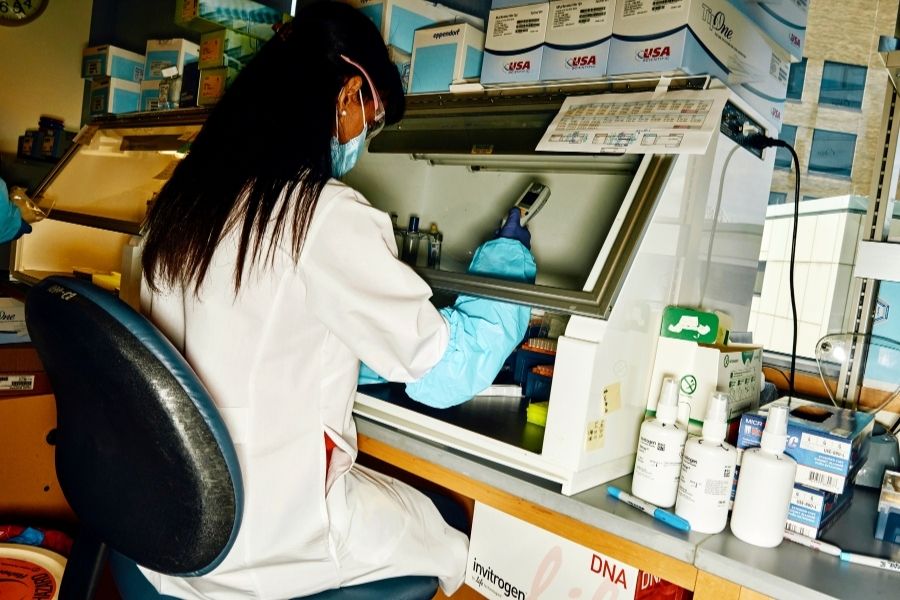 A laboratory researcher at the Center for Virology and Vaccine Research at Beth Israel Medical Center in New York on May 19, 2020. The center has been developing a coronavirus vaccine with Johnson & Johnson; Image: Tony Luong/The New York Times

The feverish race for a coronavirus vaccine got an infusion of energy Wednesday as Johnson & Johnson announced that it has begun the final stage of its clinical trials, the fourth company to do so in the United States as the country hits a grim milestone of 200,000 deaths from the pandemic. Johnson & Johnson is a couple of months behind the leaders, but its advanced vaccine trial will be by far the largest, enrolling 60,000 participants. The company said it could know by the end of this year if its vaccine works. And its vaccine has potentially consequential advantages over some competitors. It uses a technology that has a long safety record in vaccines for other diseases. Its vaccine could require just one shot instead of two — important considering that the entire population of the world needs vaccination. And it does not have to be kept frozen as it is delivered to hospitals and other places where it will be given to patients, simplifying the logistics of hundreds of millions of doses. “Big news,” President Donald Trump tweeted about the trial Wednesday morning. “@FDA must move quickly!” he added, referring to the Food and Drug Administration, which oversees vaccine approval. The president has repeatedly claimed that a vaccine will be ready before Election Day on Nov. 3 and urged federal regulators to act quickly to approve one, raising fears that they will bow to the pressure and rush their vetting process. The federal government’s Operation Warp Speed program has invested more than $10 billion in private companies’ coronavirus vaccines to date, including about $1.5 billion to Johnson & Johnson to develop and manufacture its vaccine. Facing criticism over secrecy, several companies — including Johnson & Johnson on Wednesday — have taken the rare step of releasing the detailed blueprints of their trials, which are typically considered proprietary. And the FDA is expected this week to release stricter guidelines outlining the criteria it will use to vet clinical trial data. Never in history has a vaccine been tested and manufactured so quickly — in months instead of years. Right behind Johnson & Johnson are Sanofi and Novavax, which may prove just as good or better than the leading contenders. “We need multiple vaccines to work,” said Dr. Dan Barouch, a virologist at Beth Israel Deaconess Medical Center who led the development of the technology used in Johnson & Johnson’s trial. “There are 7 billion people in the world, and no single vaccine supplier will be able to manufacture at that scale.” Johnson & Johnson’s advanced trial, known as a Phase 3 trial, started Monday. At a news conference, Dr. Paul Stoffels, the company’s chief scientific officer, said the company might be able to determine by the end of the year if the vaccine is safe and effective. The company will soon be posting a manuscript online with data from the earlier phases of its trials, he said. Johnson & Johnson has begun manufacturing the vaccine on an industrial scale to build up a supply that can be released immediately if the vaccine is authorized, Stoffels said in an interview Wednesday. He expected to have tens of millions of doses ready by the end of the year. “Then we can ramp up to many more batches,” he said. Johnson & Johnson’s vaccine uses an adenovirus to carry a gene from the coronavirus into human cells. The cell then produces coronavirus proteins, but not the coronavirus itself. These proteins can potentially prime the immune system to fight off a later infection by the virus. Adenovirus vaccines must be kept refrigerated but not frozen, unlike the two front-runner vaccines, by Moderna and Pfizer, which depend on bits of genetic material known as mRNA. The freezing requirement could make the distribution of those vaccines difficult, especially to places without advanced medical facilities. Moderna and Pfizer’s vaccines also require two jabs given a few weeks apart, a significant logistical hurdle. “It would be fabulous if we had something at a single dose,” said Dr. Judith Feinberg, vice chairwoman for research in medicine at West Virginia University, who was not involved in the study. No one will know if the single jab works until the Phase 3 trial is over, Feinberg said. But if it worked, the single dose could greatly speed efforts to curb the pandemic.