Can a healthy bottomline and a frugal fiscal DNA help travel-tech firm RateGain survive the severe Covid-19 turbulence? Well, the fight, and flight, are on 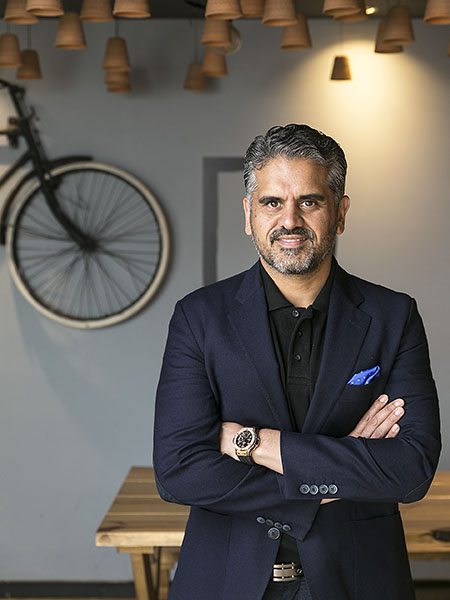 “It’s (life during Covid-19) insanely awesome. There is always an opportunity in chaos. You just need to spot it.” Bhanu Chopra, founder, RateGain
Image: Madhu Kapparath

November 2011. Bhanu Chopra had summoned an early breakfast meeting with his top management at his residence in New Delhi. There was freshly brewed filter coffee, grilled sandwiches, parathas, toast and eggs. What was also on the table was something unpalatable: A million dollar-buyout offer from a US firm for Noida-based travel-tech company RateGain, which then had a revenue of slightly over $7 million. “It’s a serious crisis,” the chief financial officer said with a grim look. “They have their foot firmly on our neck.” Over 75 percent of RateGain’s revenue was generated by this American company, which had been the sales partner for over six years. Selling out seemed to be the only plausible option for RateGain.

Chopra looked unfazed. “It’s an insanely awesome situation, gentlemen,” the founder said with a smile and took a swig from his coffee mug. “I don’t like normal. I love chaos,” he professed, dishing out an example of how the ‘insane’ DNA runs in the company. It was the same company with which Chopra had entered into a deal to have a revenue share of 90:10 percent. The insane part of the deal was that Chopra had to part with 90 percent of the revenue as the US company was giving him access to over 30,000 hotels to sell his software. “Either we accept what is on the table,” Chopra let on, “or we fight out.” “And we will rebuild from scratch. But we won’t sell out,” he continued. His team believed in the vision of the founder.

The gambit paid off. “We grew to $10 million in one year,” Chopra recalls. RateGain, over the next eight years, is likely to close year ended March 2020 with revenue of `465 crore and an estimated profit of `61 crore. “We have always stayed profitable,” he adds.   Cut to May 2020. Covid-19 has battered the global economy and dragged it closer to recession. The sector, though, that has borne the maximum brunt is travel and hospitality. America, which accounts for over 60 percent of revenue, has turned out to be the country with the highest Covid toll and infection; Europe, from where RateGain gets 20 percent of its revenue, is also in a shambles; India has cautiously started to open up and restart. For travel and hospitality companies, the forecast stays gloomy. It would be hard to find a silver lining.  Chopra remains unperturbed. “It’s an insanely awesome situation,” he reiterates. Most of his rivals in America and Europe—all small players but with pockets of influence—are wiped out; he has not lost any of his clients, though all have been renegotiating for a substantial haircut; the US has started to open up and business has kicked off; Europe too is taking baby steps to normalcy. Though never on the ventilator of VC (venture capital) support, Chopra has always run a tight ship, with a firm eye on the bottom line. “There is always an opportunity in chaos. You just need to spot it,” he says. Looking at the brighter side of the picture helps. Take, for instance, the need to have more fiscal control. Chopra has undertaken salary cuts; has sent some of its employees on furlough and has frozen marketing spend. “I am relaxed because I know we can weather this storm,” he says.

Chopra has flourished in loads of ‘insanely awesome’ moments. For somebody who started his career with a two-year stint with Deloitte in 1998 in the US, and then went on to work for a startup for a year, deciding to turn entrepreneur came after the 9/11 attacks. The maiden venture was RIV Consulting, a company that implemented CRM (customer relationship management) software for top American companies. The going was good. Chopra managed to on-board three big clients based out of Chicago, swelled his team to 20, and set his sights on aggressive expansion. His tryst with his first major crisis, though, was lurking around.  The threat didn’t come from the US, but from India. A bunch of IT outsourcing companies started offering the same services at a fraction of what Chopra was billing. For a service equivalent of $100-200 for an hour, the Indian counterparts would charge $25-30. The business soon became unsustainable; Chopra was outplayed in the price game; and the fledgling entrepreneur decided to go back to India and use the same rich technical pool of talent that had made his life hell in the US. Towards the end of 2004, Chopra started RateGain from a two-bedroom apartment in South Delhi. The venture was bootstrapped and Chopra decided to run the show himself. During the day, he would engross himself in coding software, and at night he would make calls to the US, trying to pitch his company to potential customers. The move didn’t work. Reason: Building a consumer-centric company focussed on US consumers from India was not possible. The lesson was quickly grasped. Chopra pivoted his company to B2B. Now the target was institutional clients, and soon Expedia became the first consumer. There was no looking back. The company kept scaling up, established offices in six countries and expanded operations across the globe over the next few years. Then came the buyout crisis in 2011. RateGain survived.

Four years later, came another big jolt. A rival poached most of the key employees of RateGain. Loss of employees was followed by loss of business. Chopra miraculously survived again. “I thrive in chaos and crisis,” he smiles. The company, over the next few years, bought two firms in the US to consolidate its business (see box). In fact, 2015 was the year when RateGain managed to raise its only institutional round of funding from US-based private equity firm TA Associates. The financial backers are okay with the sedate pace of growth of the company. In an age where companies focus aggressively on topline, and higher valuations, reckons Naveen Wadhera, managing director at TA Associates, RateGain has been one of the few companies that has displayed laser-sharp focus on maintaining profitability and improving margins. Their acquisition strategy, he adds, is prudent and is helping them augment the market and build a strong foundation with the promise of providing end-to-end capabilities to the travel and hospitality industry. The traditional, and often forgotten, idea of doing business always pays off, reckon VCs. Over the last few years, the dominant narrative in the startup world has been of aggressive topline growth at the cost of bottom line; scaling fast and failing fast had been the favourite catchphrase of entrepreneurs; and getting trapped in the valuation game is the dope that startups got hooked to. “It always pays to not have a bleeding bottom line,” contends Anil Joshi, founder of Unicorn India Ventures. Profit becomes all the more crucial during a crisis like Covid-19, not because of the size of the profit, but due to the habit it inculcates. “A steady focus on bottom line ensures fiscal discipline,” says Joshi. A healthy balance sheet will give RateGain an extra layer of cushion to tide over the crisis. “It definitely gives it a fighting chance to survive,” he says. Chopra, for his part, believes in always having seatbelts fastened. This gives one a sense of control, especially during turbulence. Much like what Heather Poole narrates in her book Cruising Attitude. It’s all about control, reckons Poole, a fight attended for over 20 years. “If you learn more about the weather,” she reportedly points out in the book, “and what it is and where turbulence might be, then you have a better sense of how it happens and that you will be okay.”  Chopra too sounds optimistic. In a couple of quarters—a year or 18 months—things will be back to normal. People will start travelling. “Exploring is basic human instinct. Nobody and nothing can change that,” he says. The mantra, he offers, to survive testing times is simple: Just stay insanely awesome.

Tweets by @forbes_india
Can we really break the China habit?
Harry Potter fans reimagine a world without its creator