Bharti Airtel changed the Indian mobile scene with its prepaid minutes model. It faces a tough challenge as it tries to take it to Africa through Zain

My history is that I’ve been constantly proving people wrong. I did that in 1995, 2000 and 2005. It’ll be the same in 2010 too.” Sunil Bharti Mittal, chairman and managing director of the Bharti Group, has been telling his senior managers and partners in recent meetings.

Meanwhile, his top lieutenants Manoj Kohli, CEO (International) & joint MD, Bharti Airtel, and Akhil Gupta, deputy group CEO and managing director of Bharti Enterprises, are busy zipping across Africa, to ensure their boss’ naysayers are proven wrong this time too.
Bharti Airtel brings to Zain Africa a strong balance sheet, marketing savvy, and managerial talent. All of these attributes will come into play only if Kohli and Gupta can ship to Africa Bharti’s treasure chest: The Minutes Factory.
Totally homegrown and yet in tune with the latest management theories, the Minutes Factory enabled Bharti to change the telecom business. And all eyes are on how it teleports this model to Africa.
What is the Minutes Factory? First, here is what it is not. It is not a “subscriber-led” model. The description comes from richer economies of the developed world that were the first to launch mobile phone services, Europe in particular. Since it was a new technology, the cost of setting up a network was high. In the 1990s, most mobile operators wanted well-heeled customers who would be willing to pay $1 a minute. They were also very selective in rolling out the network. “Even today in many cities in Europe you may not get a mobile signal if you are in a slightly less frequented part of the city,” says Arvind Mahajan, executive director, KPMG. Mobile companies then spent a lot of money attracting high-paying customer.
For almost seven years, the Indian market and mobile operators used the same “subscriber-led” model and nobody could make money.  While the cost of setting up the network remained high, very few subscribers signed up because the cost of making or receiving a call remained very high: About eight rupees a minute.
Then in 2001-02, Bharti came up with the Minute Factory model. Bharti outsourced network planning and IT backbone — considered core to the business — and converted its fixed costs to variable costs. Bharti was able to target millions of pre-paid customers that the subscriber-led model didn’t allow it to. This allowed it to invest a certain minimum amount to set up a network that can handle a threshold level of calls and then wait for the usage to build. Only when usage started increasing did Bharti invest more in the network.
If minutes were cars, then Bharti puts up the “additional assembly lines in the manufacturing plant” — towers and radios — only when the customers for the additional minutes show up.
The problem in mobile telephony, like in car manufacturing, is that it is not possible to do business in small measure; adding capacity to handle just 50 extra calls or just 50 additional cars, is difficult. New towers and radios will handle at least 5,000 extra calls. A new plant will make at least 5,000 cars. The manufacturer must wait till the demand reaches that level.
The beauty of the Minutes Factory is that it can add small capacities fairly rapidly and economically. The key to this is an array of partnerships that “manufacture” the minutes. The speed comes because each partner is a specialist and can do its bit better than anyone. Financially this works because Bharti doesn’t have to invest in equipment and towers in advance.

But what Bharti does is observe consumer behaviour. Essentially, it collects usage statistics from each of the radios in a network and when it notices the usage level going up in a certain part of the network, it calls into action its partners, to whom it has outsourced its network. Sometimes partners themselves monitor the network and tell Bharti that it is time to install new radio stations or set up a totally new tower to handle the expected increase in traffic. But the final decision on adding equipment is always the company’s because only its staff knows of tariffs and schemes that can change calling behaviour and traffic patterns.
This entire arrangement allows Bharti’s network utilisation to be high all the time. This is akin to any factory’s capacity utilisation being high. Combine this with Bharti’s ability to configure “new” assembly lines for additional “minutes” in quick time and you get a situation where the minutes are made only when they are ready to be consumed. 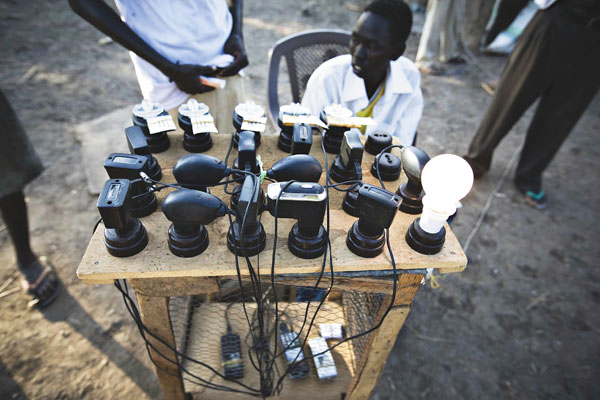 Image: Finbarr O' Reilly/ Reuters
THERE'S Enough Juice Bharti is stepping into a continent where even mobile charging is a business
The $10.7-billion (the price paid for Zain Africa) question is, can the Minutes Factory be transported to Africa? The short answer is, not very easily. Bharti’s top brass will have to think out of the box to transplant this model to Africa.
The physical act of setting up the network will perhaps be the easiest bit. It is a general belief that Africa is an inhospitable place and in many cases road infrastructure is poor or non-existent. Bharti’s detractors say that a factory model is fine but what if you can’t reach a physical location to set up the towers? Actually, sources inside Bharti say that the company’s network planning staff and its partners have had a good workout on this front in North-East India and even Bihar. “We have used elephants to transport mobile network equipment in Assam. In Bihar, we have used boats to move men and material. The logistics should not be a worry for the company,” says a source. 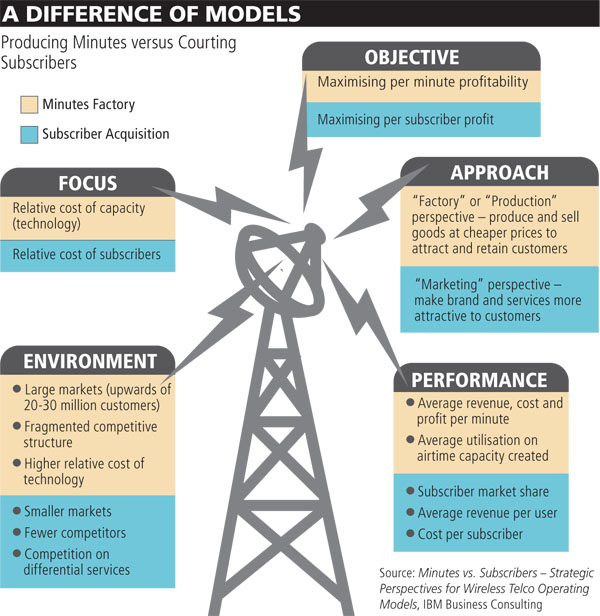 The most important challenge for the Minutes Factory will come from low level of urbanisation in Africa. Data shows that even in a populous country like Nigeria, the population density is just 162 people in every square kilometre. In India, the figure is 339. This has some serious implications for network planning. Combined with a low level of urbanisation — 20-60 percent — this means that subscriber populations are spread out. Therefore, to provide telecom services, more towers and radios are required. The capital requirements naturally go up. Also, due to lack of power many of those towers need diesel gensets running 24 hours a day, 365 days a year. It also requires more security than India to prevent vandalism. “This pushes up the cost of base stations almost three times compared with Europe. In Africa, the cost of a single base station (tower, radios, power backup) can go as high as $180,000 to $200,000. In Europe the same thing would cost $50,000 to $60,000,” says Dobek Pater of Africa Analysis. This is why African call rates are still comparatively high.
Yet it would be foolish to cut rates before the business model can support that. So can Bharti convince its partners — Ericsson, NSN, IBM — to do for it what they did in India? “The key question is whether Bharti can assure them of the sort of volumes that they did in India,” says Mahajan of KPMG. Ericsson, NSN and IBM would want to be big in Africa. Huawei, the Chinese company, is already getting entrenched there. “Currently, Ericsson and NSN are No. 1 and No. 2 in Africa, but over the next five years, Huawei claims it will be the biggest,” says Pater.
So these companies would want to replicate the Minutes Factory but the challenge will be the lack of scale for all players in each of the markets in Africa. “What makes the outsourcing model economically sound in India is that two or three large operators, who might be competitors, outsource to one vendor and that generates synergies of scale for the vendor. In most African markets, there is one large player followed by three or four smaller ones. So outsourced costs of operations might not be that different from doing it in-house,” says Pater.

But what if Bharti were to stimulate demand by first cutting prices? This would be one way of kick-starting the Minutes Factory. Since the costs cant drop quickly, cut prices, generate high traffic and then use that as a bargaining chip to get lower prices from vendors. In 2008, Zain dropped prices drastically in Kenya to dislodge Safaricom. Its traffic went up but not as much as it had expected. The reason is, the African market’s inherent inability to spend on mobile services. “The thing with Africa is that most of the 15 countries score low on the UN’s poverty index, with only two ahead of India on this count. Increasing the addressable market in some of these countries would mean lowering tariffs, which could pressure margins,” says Kawaljeet Saluja of Kotak Securities, in a research report. The other thing is whether Africans will want to gab the way Indians do even when given low call rates. “If you drop prices in Africa, people will spend a bit more time talking but instead of using their full budget from the past, they will try to save some of it,” says Pater.
Dispersed population, lack of purchasing power and outsourcing partners’ ability to measure up to the challenge are issues that Bharti will need to address quickly. If it does then maybe it will be the one genuine case of an Indian business model that can conquer the world, and Sunil Mittal’s detractors being proved wrong yet again.