As mainland money and visitors pour into Cambodia, China backs two new airports. Too bad about the French company that had an exclusive concession 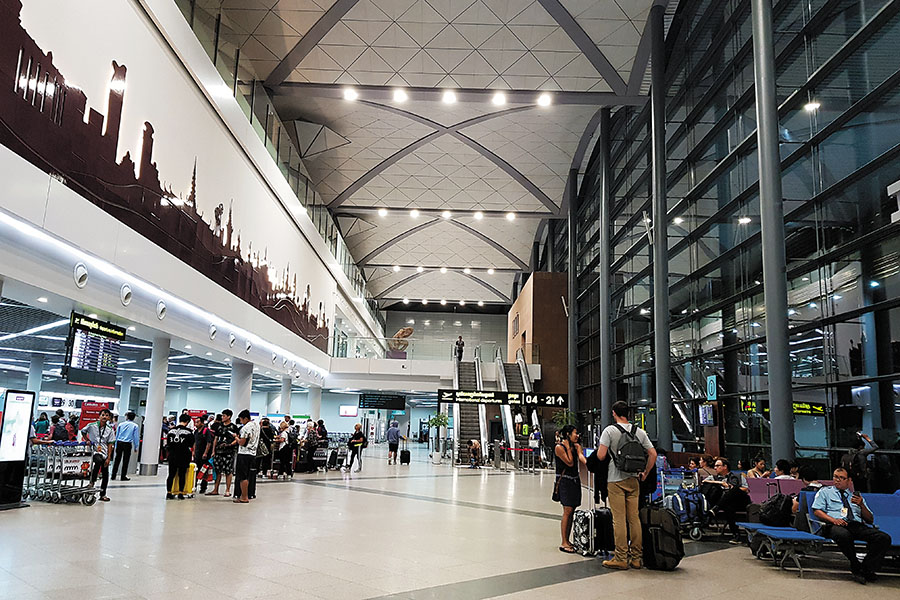 The existing Siem Reap airport, owned by Cambodia Airports, has been expanded to cater to the tourist boom.
Image: Kanokratnok / Shutterstock

The future of Cambodia’s economy, as Tekreth Samrach, chairman of the government-controlled flagship airline, sees it, is in tourism. And thanks to China, tourism, like many sectors in the economy, is surging. “To be frank, everyone goes to China to make money,” he says from his office decked with pilot caps and model planes. “So we have to go to China to make money, too.”

Following that logic, the government appears to be making a sharp break from its long-standing partnership with French infrastructure conglomerate Vinci. It’s drafting plans and starting work on two new airports backed by mainland money, despite granting an exclusive, 45-year concession on international airports to a company majority-owned by Vinci. That concession isn’t supposed to end until 2040. The government’s move is meant to address the rapid rise in tourism, but it also reflects Cambodia’s increasingly enthusiastic embrace of booming Chinese investment.

One of the new airports will serve tourism centre Siem Reap and the nearby 1,000-year-old temples. The government signed an agreement in 2016 with Chinese company Yunnan Investment Group and two others from Yunnan Province to invest in and build the project. Since March they have been prepping 750 hectares to the southeast of the Unesco World Heritage site. On the company’s website, the group’s chairman, Sun Yun, called it “a benchmark project for the Belt and Road Initiative”, referring to China’s development strategy to connect Eurasia in trade and transportation, with president Xi Jinping at the helm.

The plan for the second airport, in Phnom Penh, is more audacious. Announced in January, this project will be a joint venture between Cambodian developer Overseas Cambodia Investment Corp, or OCIC, and the State Secretariat of Civil Aviation, and built on 2,600 hectares of open land. The airport itself will cover 700 hectares and the rest will become an “airport city,” with a special economic zone, industrial area and housing developments, according to the secretariat’s deputy director-general, Sinn Chanserey Vutha. OCIC will invest $280 million, but the bulk of the funding, $1.1 billion, will come from the Bank of China, he says.

Both Sinn and Tekreth say they have few details about the Phnom Penh plans because the airport was directly ordered and arranged by prime minister Hun Sen. OCIC representatives declined to comment; the company is owned by Pung Kheav Se, a local tycoon and chairman of the country’s second-largest commercial bank, Canadia.

As of now, the company holding the airport concession, Cambodia Airports, 70 percent of which is owned by Vinci and the rest by two Cambodian tycoons and a Malaysian company, won’t be involved in either of the new airports. But Eric Delobel, Cambodia Airports chief executive, exudes confidence, saying his company will “accelerate and intensify” investment and development at its three airports regardless of whether the concession ends. He says negotiations are under way but won’t reveal details.

Though Cambodia’s aviation market is far smaller than Vinci’s largest markets in Japan and elsewhere, it’s important because it’s growing so quickly. Vinci, which generated $48 billion in revenue last year, enjoyed a 25 percent jump in traffic to 8.8 million passengers at its Cambodian airports, the fastest growth of any of its markets.

Cambodia Airports is counting on more traffic. It just spent $130 million to expand its Phnom Penh and Siem Reap airports so they can each handle at least 5 million passengers a year. At the company’s headquarters on Phnom Penh’s outskirts, now painted a light, clean grey as part of the upgrade, Delobel outlined the company’s efforts to train the workforce, add connecting flights and pursue other ways to bring in more passengers. “We are very open to discussing with [the government] the future development of those airports,” he says. “What has to be stressed to them is that today, in terms of capacity, we just achieved in 2016 and 2017 a vast development programme.”

The expansion doubled capacity at the two airports, but the number of passengers coming through Cambodia’s international airports has grown by at least 10 percent annually for the last seven years. “There will be some limitations at some point, so [within the government] there’s a desire to transition to a new airport sooner,” says Capa Centre for Aviation chief analyst Brendan Sobie.

He’s not sure, however, that Phnom Penh and Siem Reap can each support two airports, if the two China-backed airports are built. One way would be for an airport to emerge as a regional hub, but Cambodia’s small population and the lack of a major flagship carrier works against that. Southeast Asia’s primary airports are swiftly reaching capacity as tourism and investment continue to skyrocket. But even if one of their airlines decided to set up a secondary hub outside its country, there would be plenty of competition for that business around the region. “[Competing airports] work in places like Bangkok, but maybe Phnom Penh isn’t a city that could support that,” he says.

The new airports face other obstacles. Phnom Penh’s airport could stall amid a fresh dispute over the land between local villagers and rice growers and the government. Sinn, the civil aviation official, maintains that the land is owned by OCIC. Even if the conflict is resolved, says Sobie, the airport’s construction could take a decade, allowing time to resolve Cambodia Airports’ concession.

The concession always included a stipulation to build a new airport in Siem Reap, according to Tekreth, the chairman of Cambodia Angkor Air and also the secretary of state of the government’s council of ministers. But Sobie says the government is not sending a good message to investors by seemingly ending a concession with no evidence that the public-private partnership failed.

Meanwhile, Cambodia’s tourism industry continues to soar. It generated $3.6 billion in revenue last year, or 12.3 percent of gross domestic product. And the mainland accounts for much of the sector’s potential. More than a million Chinese toured Cambodia last year, and the government aims to double that number by 2020. Cambodia’s economy has traditionally relied on the garment industry, but growth in the value of garment exports has steadily declined since 2010, partly because of declining US purchases, according to the World Bank. Recently, the US and European Union threatened sanctions against Cambodia after its Supreme Court dissolved the opposition Cambodia National Rescue Party, months after its candidates were elected in hundreds of communes.

As mainland visitors tour the country in droves, Chinese investors are following. Real estate prices rose in response to news of both airports, but Key Real Estate founder Sorn Seap is sceptical investors will make money anytime soon. Construction is characteristically slow in Cambodia, and in the case of Siem Reap, Sorn says the new airport’s location is far from the tourist attractions in the city, so developers will struggle to market businesses near the airport. “I don’t think [the airport] is the one ­factor you should judge to invest nearby,” he says.

Overall, Cambodia’s economy already leans heavily on China. Not only is China the primary source of investment in the country, at roughly $1 billion of the total $6.3 billion received last year, but China holds 47.5 percent of the country’s debt.

One result of the Chinese investment can be seen in Cambodia’s port city, Sihanoukville, dubbed a second Macau for its grandiose casinos studding the coast as well as the Chinese money flooding in. North of the port and Kampong Som Bay, a contested environmental protection site, China’s Union Development Group will build a $350 million charter airport as part of the company’s $3.8 billion investment in the Dara Sakor Seashore Resort. The city’s airport, also managed by Cambodia Airports, drew a measly 386,000 passengers in the 12 months ended in March, according to Vinci’s first-quarter report, but Sinn says the development of the city makes the small airport worth watching. “Look at Sihanoukville,” he quips. “There is a tourism resort, there will be a big port, and another investment will be oil and gas. When we consider all that, we want the Sihanoukville airport to become the biggest in the country.”

Tekreth says the country will continue to absorb investment from China, just as other Southeast Asian countries have done. “We need jobs for our people, so we need more investment to follow,” he says. “This is the first time in Cambodian history that you see this kind of investment in our country.”

Tweets by @forbesindia
Bajaj Auto: Long ride home
How to ask for a raise - And get it!