The CEO of mall owner Siam Piwat aims to energise a forlorn district in Bangkok with a $1.57 billion property 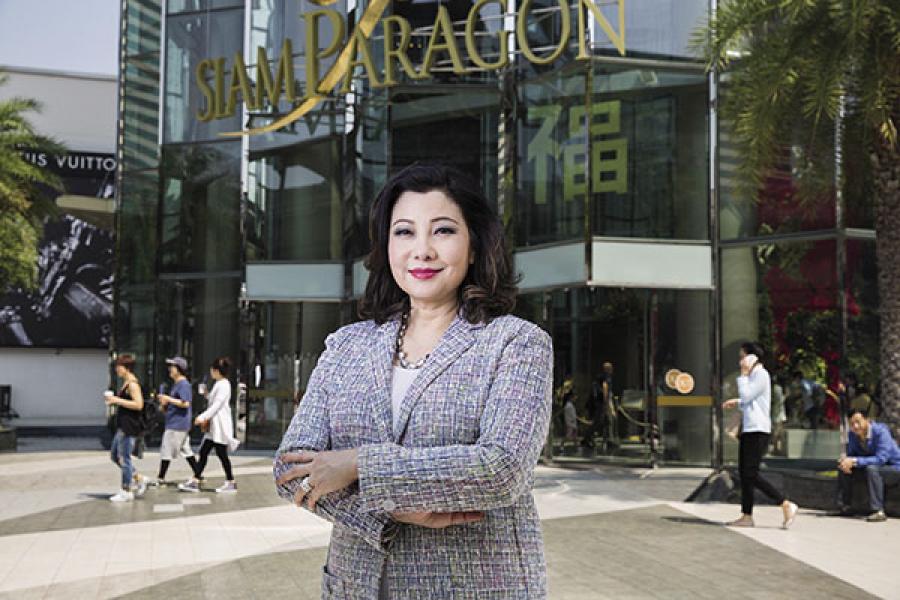 A lot of people thought we dreamt the impossible dream,” chuckles Chadatip Chutrakul, recalling initial reaction to her newest—and biggest—project, Icon Siam. The 55-year-old CEO of Siam Piwat is best known as the first lady of Siam Paragon, her signature mall. Much more than a Bangkok institution, it’s a global sensation, one of the world’s most posted sites on Instagram, alongside Disneyland and the Eiffel Tower.

Siam Piwat has evolved over nearly six decades from a hotel and shopping centre built by Chadatip’s father into a complex of flashy malls in a central Bangkok district so dominated by this family-run firm that it’s also called Siam. As rivals in Thailand’s hypercompetitive retail industry have expanded to the suburbs, around the country, even  overseas, Siam Piwat has stayed put, remodelling regularly, staking its fame and bottom line on Paragon and its adjacent shopping plazas, Siam Discovery and Siam Center.

So Icon is a quantum leap, from the comfort zone of Siam across the Chao Phraya River, to the no-man’s-land of Thonburi. Centuries ago, Thonburi predated Bangkok as Thailand’s capital, but development long ago flowed across the river to the Bangkok side, then uptown to Sathorn and Sukhumvit. A run-down area of concrete shop houses, it hardly seems a likely launching pad for an upscale shopping mecca.

Yet this Bangkok native has grand plans to revive the River of Kings, as Chao Phraya translates into English. At $1.57 billion, Chadatip says Icon is the largest privately funded project in Thai history. Besides 5.5 million square feet of retail space, the site will include two high-rise residential towers, a museum, a half-kilometre-long river walk, extensive art, theatre and conference facilities, plus docks for river cruisers and private yachts.

Bangkok plans several new bridges and subway lines across the river, and Icon will link to them by a new monorail, dubbed the Gold line. Siam Piwat will bankroll the $62 million cost, the first time a company has paid for a subway line and donated it to Bangkok.

While it was still only a dirt lot in 2014, Icon sold all 379 units in one residential tower at prices equal to those of top-tier downtown properties, according to local real estate firms. “The launch of the condos did very well and helped put the project on the map,” notes Simon Landy, Thailand chairman of Colliers International.

Chadatip says of the scheme: “This is not only about Icon, it’s about the future of the river. It’s about how we elevate the importance of the river in every aspect, meaning the historical places, culture, the art, the festivals—all the values on the river have to be integrated.”

Since Siam Piwat announced its plan for the 20-acre site in 2014, there have been signs of a Thonburi revival. Nearby, at the Jam Factory, hip architect Duangrit Bunnag has converted old warehouses into chic restaurants, shops and an art gallery. “The river is happening,” he says.

Still, it’s a high-stakes gamble, even for a risky investor—something Siam Piwat has never been—in an especially precarious time for Thailand. The past decade has been marked by political strife and a series of coups. Pitched street battles in 2010 claimed an estimated 100 lives; Central World, a shopping centre near Siam, was razed. When massive street protests crippled Bangkok in 2014, the military mounted another coup, promising a quick return to democracy. Two years on, the junta remains entrenched. The economy trails regional growth, and some say it’s teetering on recession.

“We’ve gone through lots of cycles,” Chadatip concedes, but she notes that revenue has recovered since the protests and coup of 2014. Even after a devastating bombing in the capital last August, Siam Piwat’s sales for 2015 were up by 10 percent from 2014 and grew by 18 percent from 2013. And Chadatip says there are waiting lists of years for space in malls, a figure confirmed by retailers and local analysts.

“This is exactly the kind of project Thailand needs now,” says Chadatip, noting that Siam Piwat isn’t a stranger to making tough investments in critical times. She recalls that soon after Siam Discovery was launched, the country plunged into the 1997 Asian Financial Crisis. That was under the watch of her father, Chalermchai Charuvastr, a former military general who served in the 1950s on the staff of Field Marshal Sarit Thanarat, who led a coup and became prime minister in 1957.

Chalermchai was governor of the Tourism Authority of Thailand and pioneered aviation agreements that helped usher in the era of international travel in Southeast Asia. Tourism remains a major bright light for Thailand, with 29 million visitors last year, providing 10 percent of gross domestic product, according to official statistics.
In 1959, when tourists numbered under 100,000 a year and airlines were pushing for proper lodging for crews and passengers, Chalermchai brokered a lease for 29 acres of royal parkland around the Sra Pathum Palace, then founded Bangkok Inter-Continental Hotels, which built Siam Intercontinental Hotel.

According to Chadatip, the government put up 20 percent of Bangkok Inter-Continental Hotels, InterContinental Hotels Group added 30 percent, and the rest came from local banks and about 500 private shareholders. The company was renamed Siam Piwat in 2003, but remains unlisted and doesn’t release earnings numbers. However, one local businessman calls Siam Piwat “a mint. They are printing money there”. How much flows to the family, Chadatip won’t say. “My family has some shares,” she says, “but a very, very small amount.”

Chadatip says her father had a vision “to build a city of the future, not just one project. What he saw was that he would build the hotel and the first shopping mall and office building, the first high-rise in Thailand—30 storeys—in 1965,” all on the same site where Paragon and other Siam Piwat malls now stand. Where once “this was nothing. It was orchards,” Chadatip says, now there are fountains, a towering LED screen and 250,000 visitors a day.

Chalermchai ran the company until his death in 2009. Although Chadatip is the youngest of three children, he groomed her to take over, and she has spent virtually her entire career as the first lady of Siam. Two older brothers, Charnchai and Charlie Charuvastr, have held posts with the company but largely made their marks outside. Charnchai served as CEO of telecom company Samart and prior to that was general manager of IBM Thailand. He was also chairman of Siam Paragon until he died in 2011. Charlie is a corporate relations advisor for Siam Piwat, having previously worked for PTT Exploration & Production, one of Thailand’s biggest energy companies.

Born in 1961, Chadatip attended the prestigious Chulalongkorn University in Bangkok, graduating in 1982 with a BA in banking and finance. She spent the next few years with a pair of British insurance firms, Sedgwick Offshore Resources and Willis Faber & Dumas, before coming back to Thailand, managing energy insurance services for domestic firm Dhipaya Insurance.

She has been with Siam Piwat since 1986, starting in accounting, then sales and promotion. An admitted workaholic, she is often the last to leave the office, arriving home long after dark to more emails and work calls. Her husband, Apichart Chutrakul, understands the pace; he is founder and CEO of luxury property developer Sansiri. They have one grown daughter.

Colleagues describe Chadatip as a human dynamo with boundless energy. “She’s really a superwoman. She works 24x7,” says one of her closest co-workers, who, like others at Siam Piwat, requested anonymity. “We get emails from her at all hours,” she says, adding, “She’s intensely involved in everything. Siam is her life, and it’s her passion.”

Chadatip doesn’t believe gender plays a big role in Thailand. “In this country, we have the freedom to go as high as we want,” she says. “We’ve had a lady prime minister, we’ve had many lady ministers.” In Thai culture, women have equality, she says. “There is no ceiling.”

Tweets by @forbesindia
Meet Pavel Durov, the Mark Zuckerberg of Russia
How Hari Ravichandran built Endurance through the inorganic route