How Hari Ravichandran built Endurance through the inorganic route

Hari Ravichandran of Endurance International Group took the inorganic route to build a web hosting giant, having brought it out from the ruins of the dot-com crash, not belying its first name 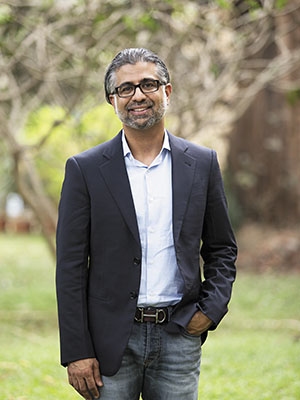 In March 1997, Hari Ravichandran, a Stanford dropout working at Sun Microsystems in California, put out print advertisements in technology journals PC Magazine and Wired. “They [the ads] basically said: Call me if you need help getting online,” Ravichandran recalls. He had dipped into his $8,000 savings and spent nearly two-thirds of it on the ads. For two weeks, no one responded. “Then, after much anticipation, I got a call from someone who said: ‘I have a bookstore, can you help me bring it online?’” That was the beginning of Ravichandran’s web-hosting business, at the peak of the dot-com boom.

For our meeting in Mumbai’s Juhu suburb in March, Ravichandran, 40, CEO of Endurance International Group (EIG), is accompanied by a phalanx of company executives. It is hard to picture the clean-cut entrepreneur as a college dropout who was once on a mission to make the next big dot-com exit. And though he admits that was his initial plan, things turned out differently.

Nearly 20 years since that phone call, the company that Ravichandran went on to set up is now a web hosting giant. Endurance provides cloud-based platform solutions for small- and medium-sized businesses, which encompass everything from enabling a company’s web presence to marketing solutions. The Massachusetts-based firm employs about 3,900 people in its 15 offices globally, and is listed on the Nasdaq. Endurance reported revenues of $741.3 million (around Rs 4,950 crore) in FY2015, and owns web presence companies like Domain.com, HostGator.com and Bluehost.com. And yet, chances are, you’ve never heard of it.

The reason for this dates back to a sharp turn that Ravichandran’s journey took in 2001. Back then, EIG (then called BizLand.com) had three offerings: A web hosting service, a plug-in ecommerce tool and a full-fledged shopping cart. It had raised around $20 million in venture capital, employed about 100 people and had nearly a million websites on its platform, says Ravichandran. “At that point, it was all subsidised by advertising,” he explains. That, he would soon find out, would prove to be the company’s Achilles heel.

The ad-based model was tied to the macroeconomic cycle and the company had been spending a lot of money on payroll to enable its rapid growth. “[During the dot-com crash of 2000] advertisers started backing off and our revenue dropped dramatically,” recalls Ravichandran. Besides, he adds, “When things go bad, the venture guys start running for the hills.”

By late 2001, a dramatic revamp became inevitable. “We had learnt a hard lesson: If you don’t focus on profitability, things can go bad.” The company was stripped down to a staff of 14, and customers were told that they would now have to pay a subscription charge for the services. “We ended up converting about 2 percent of our customers to the subscription model.” The result was that the company broke even, with $2 million in revenues the next year, says Ravichandran. Having emerged from the ruins of the dot-com bust, the company was aptly renamed Endurance in 2003.

One problem, though, remained: The company’s technology platform could support millions of customers but, post the reset, there were only a few thousand left. They needed to utilise capacity quickly. “A traditional business would’ve gone out and spent money on marketing, etc,” he says, “but we looked at the landscape and noticed all these small companies with about 2,000-5,000 customers.” EIG began acquiring them. “A lot of the transactions were seller financing. We’d pay them a little bit upfront and then we’d pay them along the way.” The first deal was worth $30,000 for 300 customers; it set in motion a consistent strategy aimed at acquiring smaller firms and expanding customer base. “To us, having brands that were organised around how people looked to buy products, was more important,” Ravichandran explains.

Between 2001 and 2007, the company grew rapidly. “In 2008, private equity firm Accel-KKR bought a majority stake in EIG. In late 2011, our investors wanted to exit, so we ended up selling the company to Goldman Sachs and Warburg Pincus for $975 million,” says Ravichandran. EIG went public in October 2013.

Although a period of organic growth followed the Accel-KKR acquisition, mergers and acquisitions have continued to play a significant role in EIG’s growth strategy. The companies under its fold continued to retain their individual brand identities, contributing in large part to the parent company’s relative anonymity. It was no different with the acquisition that brought EIG to India.

In late 2012, Ravichandran met Bhavin Turakhia, who, along with his brother Divyank, built the successful web hosting company Directi. The Mumbai-based company owned brands like BigRock, LogicBoxes and ResellerClub. “Someone had randomly introduced us, and since I have a home in Dubai and Hari was passing through, we decided to meet at a hotel to discuss mutual opportunities,” Bhavin recalls.

“I was blown away by their story,” says Ravichandran. “He [Bhavin] told me about how they had borrowed money from their parents and built a business in Mumbai when there wasn’t a structured ecosystem around venture money and building a startup. It’s very hard work in our industry.”

Turakhia and Ravichandran found much more in common. “Directi had a tough time entering the US.” So their business was tailored for non-US markets. For EIG, which was looking to expand beyond North America, Directi’s brands seemed like a perfect fit. “There was a lot of institutional knowledge around how to localise and use local currency,” says Ravichandran. By early 2014, EIG had acquired Directi’s BigRock.com, LogicBoxes.com, ResellerClub.com and Webhosting.info businesses for $100-110 million, according to the company’s filings with the Securities and Exchange Commission (SEC).

India has since become the base for EIG’s operations for Asia Pacific and beyond. “We’re looking at supporting Russian markets from here too,” says Ravichandran. Although 60-70 percent of its business still comes from North America, “in the next five years, we’re planning to spend $50-70 million on capital expenditure, payroll, and employee count in India,” he adds.

Meanwhile, EIG is on the acquisition path yet again. In early 2016, it acquired email marketing solutions provider Constant Contact for $1.1 billion, which, with its approximately 566,000 subscribers, expanded EIG’s subscriber base to about 5.4 million, SEC filings reveal.

Ravichandran has come a long way from posting those ads. In 2014 and 2015, he was ranked among America’s Most Powerful CEOs 40 And Under, by Forbes. EIG expects to cross $1 billion in revenue this financial year. But unlike many new-age technology firms, it has taken a while. “I thought it was going to be a two year in and out, dot-com success story,” he says, smiling. “We’re now coming up on 20 years, and it’s still going.”