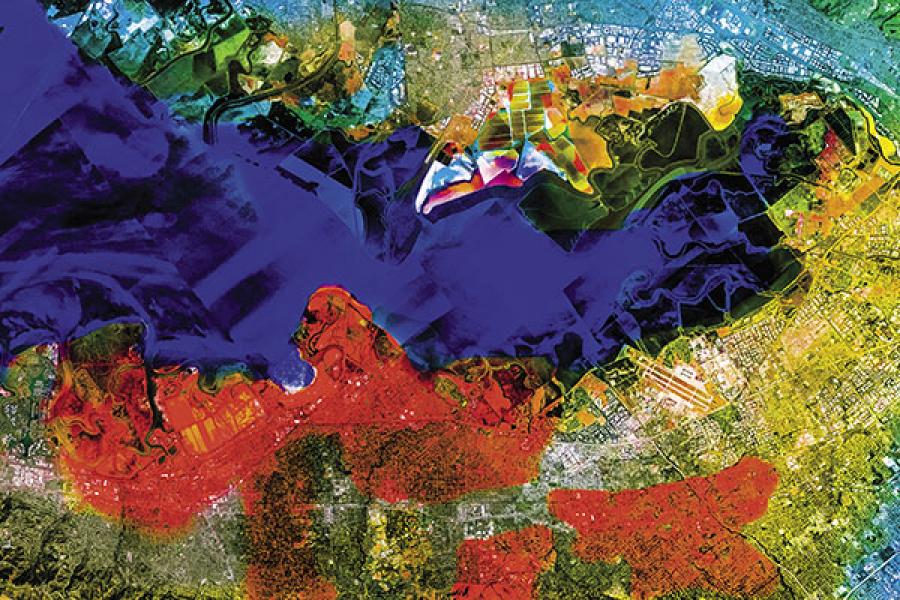 “Listen, this is too late in the game,” Arunachalam recalls saying, given that it was a Monday and he anxiously wanted to close the deal by Friday. “Let’s just leave them alone and move on.”

But their suitor would not be turned away. Within 48 hours Alibaba offered to put in $5 million—helping to pump the funding round up to $18.9 million—and sent over a two-page memo explaining its ecommerce business and ambitions in entertainment. By Thursday morning Hongping Zhang, managing director of Alibaba Capital Partners, showed up at Peel’s door in Mountain View, California, and wooed the two co-founders over a long lunch. That night, already Friday Beijing time, Alibaba shot over the cash.

“They were the last people to talk to us but ended up being the first to wire the money,” Arunachalam says. “They moved like a big startup.” Less than a year later Alibaba dropped another $50 million into Peel during its Series D round, helping to fund the company as its app grew to more than 100 million users.

This investment proved an early and tiny piece of the ecommerce giant’s recent spending spree on American startups, one that speaks volumes about a trend quietly reshaping the venture capital ecosystem. Alibaba and its two giant Chinese internet rivals—search engine Baidu and gaming/messaging firm Tencent—a trio known as BAT, are pouring money into all manner of firms at every stage from seed to late rounds. Since 2012 we count more than 50 investments totaling $2.3 billion. In the past 18 months alone Alibaba has ploughed more than $1 billion into just 10 US firms.

Many of the investments are bizarre on the surface, smacking of dumb money rushing in late in the cycle and driving up valuations for everyone. Why would an ecommerce giant spend tens of millions of dollars on a startup like Peel that’s outside of its core business, not to mention its core country?

In a word: Smartphones. The three BAT companies each monopolise a sphere of China’s desktop-style online behaviour, but they risk falling behind in mobile. This is a problem in a country where millions of people skip PCs entirely. Hence the landgrab—the Big Three don’t much care where the innovations on this new intertwined platform come from or, it seems, how much they have to shell out to secure them. “In the online world, everybody has their own domain, but in mobile, everyone’s competing on everyone else’s turf,” says Jay Eum, co-founder of TransLink Capital, the venture capital firm that introduced Alibaba to Peel and has invested in two other Alibaba-backed startups, Quixey and Tango. 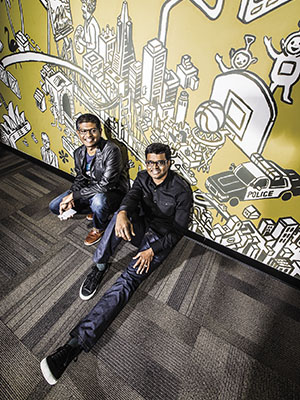 To some extent it’s similar to the concurrent multifront competition in the US among Amazon, Google and Facebook, and each of the three Chinese companies brings its own style. Tencent is the most quiet about its investments, reflecting the low-profile personality of its billionaire founder, Ma Huateng. Baidu focuses on research investment as well as direct funding in startups, a hybrid style similar to that of its US inspiration, Google. The company is sinking $300 million into an R&D lab in Sunnyvale, California, the largest yet by any Chinese internet company in California, run by Andrew Ng, co-founder of online educator Coursera and the man who set up Google’s deep learning project.

Meanwhile, Alibaba’s venture unit operates much like its largest outside shareholder, Masayoshi Son’s SoftBank. “There’s always a strategic angle, but a certain level of investment returns is the bottom line,” says TransLink’s Eum. Alibaba’s Jack Ma saw how much SoftBank and Yahoo made from investing early in his firm—now he wants his own lottery ticket.

The competition among the three plays out in ways that often don’t seem rational. Last December Baidu’s chief financial officer, Jennifer Li, right-hand woman to its billionaire CEO, Robin Li, helped lead Baidu’s roughly $200 million investment in Uber at a reported $41 billion valuation. A search engine buying into a car-hailing app doesn’t make a tonne of sense on paper. No matter, says Li: “Mobile development in China is exploding. Baidu’s vision today is to connect people with services. Uber is an example of that.”

Plus, she needed to respond to her two rivals. As Uber set foot in China, Tencent and Alibaba were already backing two Uber clones, Didi Dache and Kuaidi Dache, respectively. Now the Chinese can hail Uber on their phones through Baidu Maps. The search engine is also hoping to leverage Uber in Baidu Wallet’s uphill battle against Alibaba’s Alipay and Tencent’s WeChat Payment. Not to be outflanked, Tencent and Alibaba merged their ride-share shops, creating a near monopoly worth $8.75 billion. And the battle rages on. Kevin Chou could do that math. The CEO of San Francisco-based mobile-gaming startup Kabam hit the road in China for his latest funding round last spring, hopeful for access to that market. “Entering China is a pretty complicated affair,” he says. “It operates in a very different fashion than any other market in the world because of such a strong presence of the major Chinese internet players.” For the next few months the 35-year-old Chinese-American, who co-founded his company in downtown Mountain View above a dim sum restaurant, sought out the BAT trio, among others, and ended up with five term sheets. “It’s a lot of dinners, a lot of baijiu,” grins Chou, referring to a potent Chinese liquor.

By July Kabam had its number—a valuation that shot it past the $1 billion “unicorn” threshold—from Alibaba, which plunked down $120 million for just over a 10 percent stake, as well as instant credibility and relationships in China. “If you don’t know who you’re working with, you can really get yourself into trouble,” says Chou.

Alibaba, for its part, paid the premium with a clear eye on Tencent, the world’s largest gaming company, which has $7.2 billion in revenue from online gaming alone last year. The deal came with an initial commitment by Kabam to launch 10 games during the next three years through Alibaba, including ones related to Hollywood blockbuster movies like Lord of the Rings, Hunger Games and Fast and Furious. Expect Alibaba to leverage its investment by using its PayPal clone, Alipay, for mobile micropayments and by promoting Kabam through the Alibaba-backed video site Youku Tudou.

“While they care about the financial returns, the amount of money they put into Kabam is a rounding error,” says Chou. “They don’t stress out anytime when there’s a small problem.” Alibaba even organises an annual ‘Ali-family’ party for its portfolio companies with the hope of fostering synergies. San Mateo-based ShopRunner, which raised $206 million from Alibaba in 2013, was one of the first partners of Alipay’s ePass programme, which enables US retailers to sell directly to Chinese consumers. “It came up afterwards, after we started to understand more about each other,” CEO Scott Thompson says. “Now it’s obvious that there’s something else we can do together, and it’s likely to be a really interesting big business at some point.”

Such synergies (and enormous valuations) make the BAT troika today’s investors of choice. Silicon Valley used to look askance at money coming from a place where the central government blocks everything from Facebook to Gmail. “When Alibaba first invested, we took it with a huge grain of salt,” says Peel’s Krishnan. Now companies like Snapchat look eagerly to China—the disappearing-message app is reportedly raising $200 million from Alibaba, which again seems to be targeting Tencent, specifically its WeChat service. No matter that Snapchat is banned in China (or that Tencent also invested in a 2013 round).

“They’re playing a global game of domination on the internet,” says Patrick Riley, founder and CEO of search engine Ark, for which Tencent participated in a $4.2 million seed round. “It goes entirely against the reputation, what the United States thinks of Chinese companies, which is just copy-paste.” With BAT leading the trend, other tech companies, from mobile giant Xiaomi to Baidu rival Qihoo, are following in their footsteps with smaller deals. With the right bets in Silicon Valley, Chinese companies can redeploy the US startups’ technology and talent for their immediate next steps: Expansion into other emerging economies such as India and Brazil. Eventually they’ll grab a piece in the saturated American market. “Everyone is competing on everything,” says Kabam’s Chou.