Crest Animation: In Search Of The Happily Ever After

No Indian has cracked the American animation movie market so far. Most are content with outsourced work, but A.K. Madhavan is taking a creative leap into Hollywood 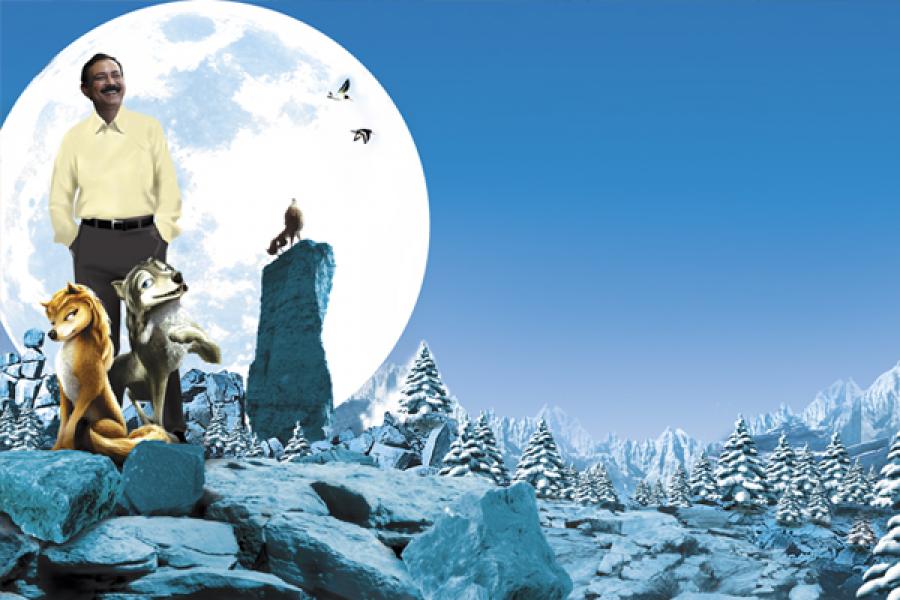 Once upon a time, there lived two young wolves. Though of the same pack, they couldn’t be more different. Kate was the daughter of the pack head; disciplined and dominating. Humphrey was one of the not-so-privileged ones; fun and friends were his passion. Kate was betrothed to the son of another pack leader. But as destiny would have it, both Kate and Humphrey were picked up by forest rangers and relocated. Now the two must together battle ill weather and hostile strangers, and find their way back home. Can the unlikely pair accept each other and strive for the common goal?

This storyline of Alpha & Omega, a 3D animation movie that will hit the US theatres in September, has an uncanny resemblance to what its maker is trying to do. Crest Animation Studios Ltd., the Mumbai-based maker of Alpha & Omega, is part of the same pack that includes Pixar, DreamWorks Animation and Sony Pictures Animation. But Pixar and the others are at the head of the pack. They make movies that have a budget of over $100 million and gross many times that at the box office. Crest Animation, on the other hand, brings up the rear of the pack and is part of the servicing segment of the industry. Like its local peers, Crest brings outsourced work from studios in the US and elsewhere to India, where production is much cheaper. But with Alpha & Omega, Crest is attempting what no other Indian animation maker has done till now — to make an animation movie for the US market, with creative control over the film — and join the ranks of the big names. In fact, this may be a first such attempt by a non-Hollywood studio globally.

Crest also has a lot riding on the movie financially. It has made the movie in one-fifth the budget of an average Hollywood release, which ranges from $80 million to $200 million. So even at the lower band, the budget for Alpha & Omega comes to about $16 million. Crest has put in half of that money, which is almost equal to its one year’s total revenues! If the movie fails to fire up the box office, Crest might be forced to raise more debt, making its capital structure more vulnerable.
So can Crest get acceptance from the leaders of its pack and also bring financial stability for itself?

Content is King
To do that, Alpha & Omega will have to woo the American audience —the biggest market for animation movies in the world. On its part, Crest is making sure that it gets the mix right and meets their taste; especially since this is not its first attempt to scale the Mount Everest of the animation industry.

Crest, then called Crest Communications, was founded by animation expert Shyam Ramanna in 1990 as an advertising film production company. Though it also made special effects for Bollywood movies, Crest’s initial claim to fame was making India’s first advertisement for condoms. In 2000, the now publicly listed company changed its focus to computer-generated imagery, or CGI, by acquiring Los Angeles-based Rich Animation for $5 million. While Crest did the bread-and-butter work of creating content for others, Ramanna also tied up with American studio, Columbia Tristar, to make a 3D animation movie called Automation for $50 million. The project was in process for more than two years, but petered out “due to creative differences”.

It was a blow for the company as the new initiative had come just after a difficult phase where the company had almost gone bankrupt. Fortunately, around that time Crest found a new partner in Lionsgate Films, a tier-2 distribution company in the US whose hits include SAW and the recent The Expendables starring Sylvester Stallone. The two agreed to do a three-movie deal. While Crest, through its offices in Los Angeles and Mumbai, would handle the pre-production and production of the movies, Lionsgate would help market and distribute the movies. As for the money part, the two became equal partners. “For us also, this is the first time that we are venturing into producing an animation feature film,” says Ken Katsumoto, Executive VP of Lionsgate Family Entertainment, a unit of Lionsgate Films.

Taking benefit of the low cost of doing production in India, the animation for Alpha & Omega has been done in Mumbai.  To make things equally cost effective at Crest Animation Productions, the erstwhile Rich Animation, A.K. Madhavan, Chief Executive Officer, Crest Animation, took on scriptwriters, designers and voice cast on contract. The US arm otherwise has only about 30 people on its payroll. Here too, Crest decided to do away with “star voices” like Tom Hanks in Toy Story, who can make up for at least one-third of an animation movie budget.

“We believe that Alpha & Omega will fundamentally force everybody in the US to evaluate the way they spend money on producing a movie,” says Noah Fogelson, head of Crest’s US arm.

Costs though matter less when trying to make a movie a hit at US box offices. Toy Story 3, the latest release from Pixar, cost $200 million to make. “But animation movies in the US go on to make as much or even more than the mainstream movies. So money is not a concern for the big studios,” says Matt Atchity, Editor in Chief of Rotten Tomatoes, a popular American movie Web site. By the way, Toy Story 3 has become the most successful animation movie ever, grossing $940 million by mid-August.

“Content is the king,” says Phil Contrino, Editor of the US-based BoxOffice Magazine, a 90-year-old industry publication. “It is all about the story and the American studios have been at it since the beginning of animation,” he adds.

Successful animation movies appeal both to children and adults. This is one reason why 3D movies since 1995 (that was when Toy Story, the first 3D product, premiered and unleashed a revolution) have clocked an average of $250 million at the box office. “These movies, along with fantastic graphics, also have a subtext to their story plot that connects with the adults, like in the case of Up and Wall E. Or like Shrek, these movies have tongue-in-cheek humour that adults can understand,” says Contrino.