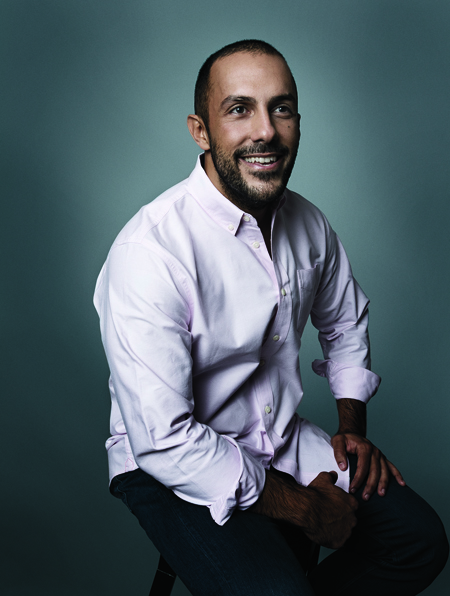 Perry Rahbar’s DV01 software untangles gaggles of consumer loans with just a few clicks
Image: Tim Pannell for Forbes
On Friday, March 14, 2008, the fateful day Bear Stearns announced it would need a lifeline from JPMorgan Chase and the Federal Reserve Bank of New York, its stock plummeted, its bonds were downgraded to near-junk status, and an exodus of traders from the storied firm headed down the street to Connolly’s for goodbye drinks. One budding mortgage-bond trader named Perry Rahbar, then 25, missed out on the farewell party. Rahbar was hunkered down at his desk and would remain there until 4 am, combing through dozens of IT systems and thousands of rows in spreadsheets in an effort to quantify the firm’s mortgage exposure for a potential buyer. The figures were different in the US, Europe and Asia, and uncertainty abounded, underlining the hodgepodge of habits and dated technology that were endemic to the booming mortgage-backed-securities market.

“Everyone was fine with Bear Stearns when it was a bull market,” Rahbar says, “but when things got hot and no one could understand how much exposure they had, it became a problem.”

Rahbar’s all-nighter gave him an insight that would serve him well nearly a decade later. His two-year-old New York City firm, DV01, offers analytics and reporting software for the burgeoning peer-to-peer market, giving investors the ability to track the performance of thousands of loans in a few clicks. Named after a formula traders use to calculate their exposure to interest rate changes, DV01 also automates the laborious financial gymnastics that are needed to model loan performance, and it is on its way to becoming a fixture in the industry’s biggest deals as firms like Lending Club, Prosper and SoFi issue securities to finance their loan pools.

These peer-to-peer platforms, now called marketplace lenders, are part of a sea change in finance made possible by big data, machine learning and cloud computing. The new lenders use sophisticated algorithms to lend money at lower rates than banks. Two platforms, Lending Club and OnDeck Capital, are now publicly traded. Prosper, SoFi, CommonBond and Avant are becoming go-to brand names for Millennial borrowers. Collectively, the industry has raised more than $12 billion in venture funding since 2011, according to PitchBook, and lent out roughly $50 billion.

A Long Island native with Iranian roots and an economics degree from Emory University, Rahbar, 35, has spent the past two years at his startup in New York City’s Flatiron District rebuilding what he says is the industry’s antiquated plumbing.

Peer-to-peer lenders originally connected borrowers directly with individual investors, but rising loan demand forced them to turn to Wall Street-style securitisation—the packaging of thousands of individual loans into tradeable securities. Three years ago, Lending Club was the first to market with such a securitisation, and Prosper, SoFi and OnDeck Capital quickly followed. As of the end of September, roughly $11 billion of these loans, according to PeerIQ, has been bundled into securities since 2015.

But during the mortgage boom, record keeping, transparency and financial discipline took a backseat to market growth, and the new marketplace-financing rush has already shown similar flaws. In late 2015, Citigroup rushed the sale of a pool of Prosper’s loans, which tanked in the market, and in May, Lending Club said it improperly sold $22 million in securities to an investor. A crisis of confidence ensued, the stocks of marketplace lenders plummeted, and investors were left to sift through scattered Excel files and PDF pages of trustee reports aggregating the performance of thousands of loans in order to track the securities’ risks.

Enter DV01, which was tapped to participate in Lending Club’s securitisations. In a sparsely decorated conference room, Rahbar hooks a projector to his laptop and with one click loads 1,119,181 Lending Club loans, originally worth $16.6 billion. The loans are neatly sorted in DV01’s interface by each borrower’s grade on an A-to-G scale, FICO score and debt-to-income ratio as well as the remaining life and balance of the loan and other variables. With a few more clicks, DV01 shows that 17,358 Lending Club loans, originally worth $276 million, are delinquent.

The vivid, colourful graphics make it apparent that loans made during the second quarter of 2015 have been some of Lending Club’s worst-performing. At 14 months into the pool, 3.74 percent of loans were in default. Loans made in early 2014, by contrast, did far better, with a 2.81 percent default rate. On another screen, DV01 data show that, as expected, grade-D Lending Club borrowers (with an average debt-to-income ratio of 21.42 percent) performed worse than higher-rated grade-C borrowers (with a ratio of 19.94 percent).

“DV01 helps people get a transparent view of what’s going on, what’s causing problems and what’s performing well. Historically, you couldn’t do this in an easy fashion,” Rahbar says, noting how investors can make comparisons across originators and borrowers in seconds. Originators of securities pools also feed performance to DV01, giving investors the ability to track loan-level performance daily. “DV01’s product provides such tools to allow us to value risk efficiently in the marketplace-lending sector,” says Jordan Milman, the trading boss at the $2.5 billion hedge fund LibreMax Capital.

Rahbar’s startup currently tracks the loans of Lending Club and eight other originators and counts 55 institutions as clients. All told it has logged in some $34 billion in loans. DV01 is backed by $7.5 million in capital from Leucadia National (Jefferies’s parent), Pivot Investment Partners and a fund controlled by George Soros.

DV01 is paid two basis points on the principal amount for its services as a loan data agent, and buy-side investors pay a bit more for access to its analytics platform. Demand is brisk. Rahbar expects DV01 will serve as a data agent on three more deals by the end of the year. “When an investor tells a marketplace that they won’t invest without the data going to DV01, there’s no decision to be made,” says Ron Suber, president of Prosper.

So far, DV01 has been employed on two big Lending Club securitisations, which totalled $451 million and went to market in August and October. “DV01 can become a standard to allow investors to easily compare and contrast loan-level detail from each platform and make informed decisions about risk,” say Brian McGrath, a managing director at Jefferies, which underwrote Lending Club’s $137 million deal in August.

Of course, given the current frenzy of fintech startups, DV01 isn’t alone. It competes with firms like Orchard Platform, PeerIQ and MonJa. For Rahbar, the tiny $50 billion marketplace-lending market is just the beginning. “There are transparency issues in all mortgage and consumer lending,” he says. “That’s a $12 trillion pie, not a $50 billion pie.”

Tweets by @forbesindia
Cyrus Mistry quits as chairman of Tata group companies
India is one of the growth drivers of our emerging markets strategy: Merck Healthcare CEO