Fashion's hottest company... is based in Maine

While Lands' End and other rivals struggle, 102-year-old LL Bean is thriving, thanks to a trendy boot—and an old-school workforce that doesn't cut corners 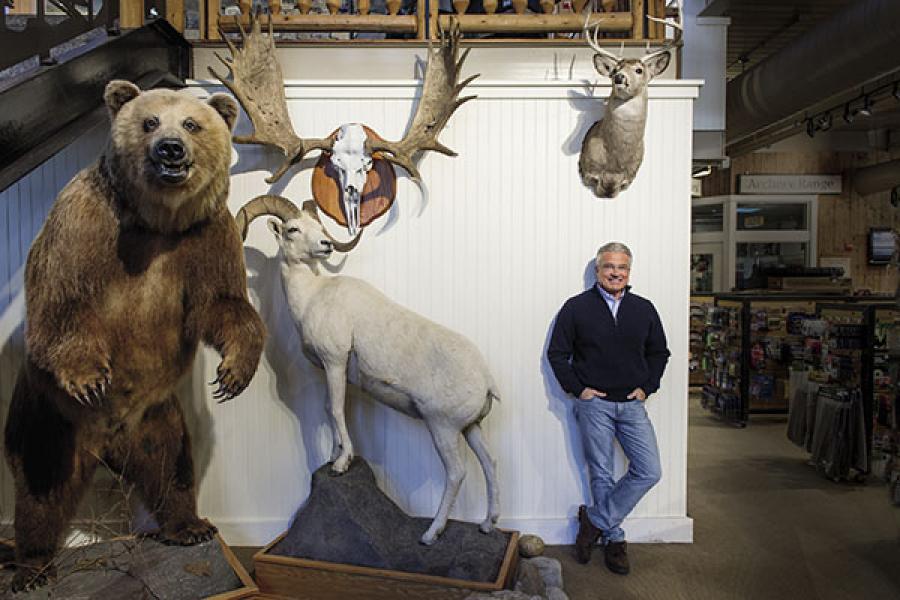 In the rarefied world of high fashion it isn’t unusual for a gown or purse to become so sought-after that people will wait in line for it. The list for Hermès’s $70,000 Birkin handbag was once years long. Last year Italian couturier Fendi released a small fox fur and mink key chain in the likeness of designer Karl Lagerfeld and claimed the wait list to pay $1,750 was 600 deep.

So, it must come as a shock to global fashionistas that the most coveted item in recent memory costs a mere $109 and comes from the rugged New England town of Freeport, Maine, rather than an atelier in Paris or Milan. In December, outdoor outfitters LL Bean announced that the wait list for its unglamorous, all-weather Bean Boots had reached an incredible 100,000 customers.

The two-toned brown-and-taupe leather boots have always had a following on East Coast college campuses thanks to their New England cachet, preppy aesthetic and durability. But no one, including LL Bean CEO Chrisopher McCormick, can quite put a finger on what’s driving the current boom, during which boot sales rose 12.5 percent from 400,000 in 2013 to 450,000 last year. “We forecasted for a large increase this year, but it came in at twice the forecast,” says the 32-year company veteran and the first person to lead the company who isn’t a descendant of founder Leon Leonwood Bean.

The one reason behind the craze: Quality. Every pair is handmade, with all its components sourced in the US. Each set takes from 45 minutes to an hour to make, passing through eight pairs of hands. The slightly weary workforce on the factory floor in coastal Brunswick is pulling extra shifts to meet demand, but the process remains the same. “You mess up, you’re going back to square one,” says Cindy Morse, a 21-year Bean veteran, over the thud of a vamping machine that finishes off each boot with three stitches of heavily waxed thread. There’s urgency but no rush. If you bought a pair in February, you can expect to receive them around June.

That high level of commitment runs deep among Bean workers. In Forbes’s first-ever ranking of America’s Best Employers, Bean finished fifth overall and first among clothing and outdoor-gear makers. The company recorded revenues of $1.61 billion in 2014, and it expects another uptick this year, its sixth straight, which will take it past even its 2007 pre-recession high. Forbes estimates that the private company’s profit margin hovers around 10 percent.

This steady growth bucks a downward trend that’s seen others in the midpriced-apparel sector struggle. Last spring troubled retailer Sears spun off Bean’s closest competitor, Lands’ End, 12 years after buying it for $1.9 billion. Lands’ End shares tanked in January when the cold-weather clothier announced lackluster holiday sales. In February it made a surprise announcement: It had hired Federica Marchionni, formerly US head of luxury label Dolce & Gabbana, as CEO.

McCormick’s team is decidedly less chic, and he’s fine with that. “They’re really our secret weapon, our competitive advantage,” he says. “Because they are so good and so dedicated, I think much more so than other retailers.”

Bean Boots were originally intended for hunters, not city dwellers aping lumberjacks to be hip or southern college students, both of whom have contributed to the current mania. At the turn of the 20th century Greenwood, Maine native and avid outdoorsman Leon Leonwood Bean had returned home from a hunting trip with soggy feet one too many times.

He hired a local cobbler to develop a pair of waterproof boots. The first Bean catalogue was a three-page flyer sent to fellow hunters in 1912. Of the initial order of 100 pairs, 92 were returned; Bean’s rubber soles had developed cracks. LL took a $400 loan to perfect his boots. By 1917 he’d set up shop in Freeport. Four years later he patented his Maine Hunting Shoe.

The Bean Boot—among some 150,000 products of the company—has made LL’s descendants very wealthy indeed. The company remains wholly owned by the family. Forbes estimates the Bean clan’s combined net worth at $1.8 billion.

The current chairman, Shawn Gorman (49), is LL’s great-grandson; he succeeded his uncle Leon two years ago. Members of their extended family have jobs all across the 5,300-employee company. There’s a fifth-generation Bean in the marketing office. McCormick sees the company’s family ownership as intrinsic to its culture. “We value our employees more, I think, than maybe some other companies,” he says.

While some 75 percent of Bean’s manufacturing is now done overseas, its signature boots are still made in Maine, largely the way they were in LL’s day. Putting each boot together entails not just time but skill as well, with up to six months of training required for the stitchers.

During the second shift on a February afternoon Connie Rose, a factory employee of 19 years, hand-cuts leather shoe forms from a pile of tanned hides delivered from a cow farm in northern Maine. Next to that pile is a waist-high stack of fluffy sheepskins soon to become boot linings. Rose uses a steel die that looks like a sharp, oversize cookie cutter to turn sheets of leather into the sides, backs and tongues of boots. She says she cuts enough leather per shift to make 120 pairs. 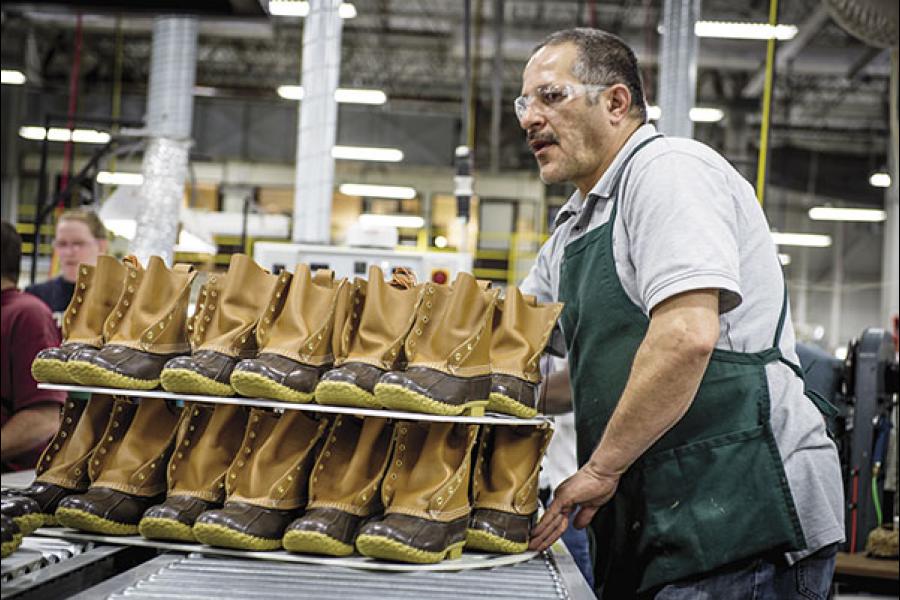 Image: Shawn Henry for Forbes
In coastal Brunswick, Maine workers make Bean’s boots pretty much the same way they did back in 1917

Toward the back of the factory are laundry trolleys with hundreds of newly completed Boat and Tote bags, Bean’s most-ordered products after the boots, their hardy beige canvas offset by colourful pastel straps and monogrammed initials. For every “Liam” or “Lisa” sewed on to a tote, there’s a Japanese name; the Boat and Totes are hugely popular in Japan, where Bean operates 20 stores and is growing.

The workforce is diverse, particularly for Maine, where the population is 95 percent white. More than 40 languages are spoken in manufacturing, says McCormick. It’s also a relatively old group, with a median age of 48. The firm goes out of its way to recruit older workers, particularly for its seasonal factory and warehouse positions, when it relies on retirees seeking extra cash. About 60 percent of the 5,000 extra shift workers who come on board each August for the holiday season return every year. The pay isn’t bad. The average hourly worker earns $32,000-$35,000 annually. This year all 5,300 full-timers will get a 5 percent boost in their pay from profits, amounting to between $1,500 and $2,000 apiece.

A staggering 21 percent of Bean’s employees have been with the firm for more than 20 years. “If you’re fortunate enough to get a job at Bean, you stay there,” says Dana Connors, president of Maine’s Chamber of Commerce. Bean is among the top five private employers in the state by size. Connors credits Bean for weathering a tough retail environment in recent years. “They were opening stores when everyone else was migrating onto the internet,” he says.

While online orders officially surpassed phone and mail orders in 2009, Bean remains a catalogue company at heart. Many of its regular customers predate the ecommerce boom and still prefer a voice at the end of a phone. On an afternoon shift at Bean’s Northport customer service centre, Rae Cousins, who’s worked there 28 years, comforts a caller who can’t seem to pry open the battery door on the LED headlamp he ordered and doesn’t want to venture out into the Minnesota winter without it because of his age and frailty. “I understand,” says Cousins. “I’m elderly, too.”

Before Cousins is finished with his call, an alarm sounds, reminding workers to get up and stretch during their shift. Perhaps fittingly for an outdoor-gear maker, Bean is obsessive about its employees’ health. There are gyms in every office, call centre and factory. For what the company deems “at risk” workers—diabetics or the obese, for example—there’s a competitive, application-only health and fitness programme called BeanStrong. Employees who win a slot attend classes during work hours, overseen by trainers and nutritionists. The company pays for 75 percent of its workers’ healthcare costs.

It consistently ranks at the top of monthly benchmark reports by StellaService, a Nielsen-like ratings agency for online customer service, beating rivals such as Lands’ End, REI and Patagonia. Metrics include shipping speed, ease of returns and quality of correspondence. “They’re relentless at this,” says Ty McMahan, head of marketing at StellaService. “The level of attention, the product knowledge, the policy knowledge—they’re consistent across all channels.”

At the Northport customer call centre 30-year Bean veteran Jayne Buckoff maintains a sample room filled with almost every product the company sells, from T-shirts to canoes. This way if an employee has to answer a detailed question, he or she has the item at hand. Buckoff also keeps a file cabinet full of yellowing instruction manuals going back 60 years. “It’s for when a customer inherits their uncle George’s tent but doesn’t know how to set it up,” she says.

Bean has a plan to cut its waiting list. Over the next few months, the Brunswick factory will hire 100 new workers who’ll focus solely on the coveted Bean Boot—a 25 percent boost to its full-time shoemaking workforce. A second injection-moulding machine will be installed to make enough rubber soles. It’ll soon be seeking a new crop of retail employees, too. In March, McCormick announced a plan to quadruple Bean’s brick-and-mortar footprint by 2020. Today it runs 25 stores in the US. The goal is to reach 100 in five years, while adding outlets in key overseas markets like Japan and China.

Next year the company will close its Bangor call centre, where 220 people currently work full-time, a number that swells to over 800 during the holidays. “Call volumes have dropped because of the web,” says McCormick. He’s assured these staffers that they’ll be able to stay on as home agents if they’d like, answering emails and doing live chats. Those who aren’t keen will be offered severance pay. “We offered jobs to everyone,” he says, signalling his workforce that Bean will take care of them, just as they take care of the company.

Tweets by @forbesindia
The KTM 1290 Super Duke R is a real monster
Star Wars Day is here. May the force be with you