Star Wars Day is here. May the force be with you

The next installment of the series is months away, but May 4—Star Wars Day—is here. May the Fourth—er, Force—be with you 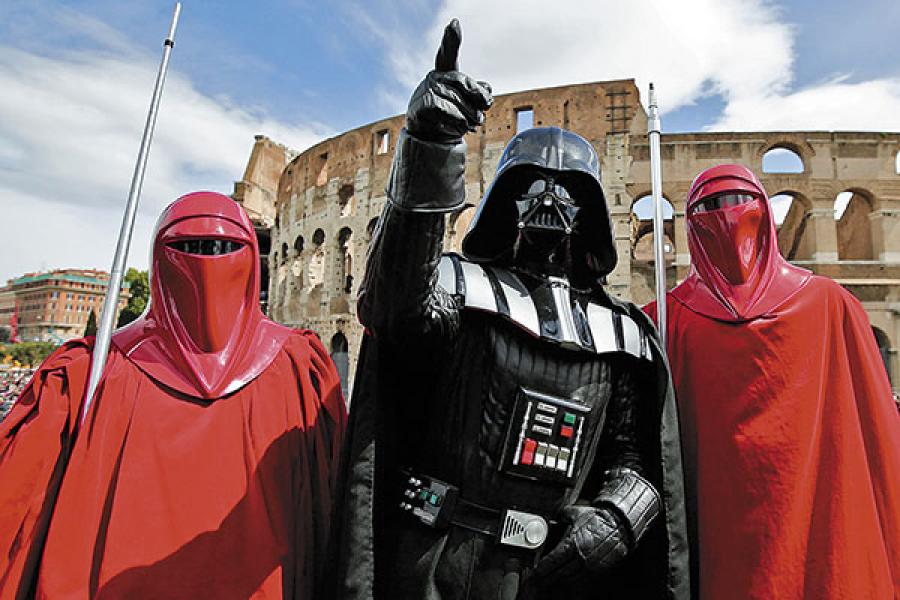 Image: Corbis
A member of a Star Wars fan club dressed as Darth Vader celebrates Star Wars Day, in 2014, in front of the Colosseum in central Rome

1.  The Force: A mysterious power that touches all living beings and aligns with their thoughts, beliefs and emotions. Only with great practice and meditation can it be harnessed, something that both the good guys and the bad guys seem to have done.

2. Jedi: The good guys. For years, they train in the Jedi Temple to use the light side of the Force and protect the Galactic Republic. A Jedi knight is wise, patient and compassionate; and, of course, he is brave and lethal in combat. Think Shifu in Kung Fu Panda (without the furry parts, of course).

3. Sith: The bad guys. They use the dark side of the Force for all things evil (including taking over the Galactic Republic and sending the good guys packing). They were part of the good guys once, but decided they weren’t having much fun. And came over to the dark side.

4. Lightsabers: So, these look like tube lights in colourful wrapping, but are actually laser swords that cut through anything. Needless to say, they are the weapons of choice for all concerned. Made of “pure energy”, it requires great skill to handle them (and not slice off some limb of your own).

5. Darth Vader: He’s menacing, he’s evil and he breathes funny. This lord of the Sith is the ultimate badass, with his trademark black helmet and three robotic limbs. His powers include choking someone with his will power (sort of murder by Bluetooth). He used to be Anakin Skywalker (a good guy) before switching sides.

6. Master Yoda: The small, green guy with the funny ears. He is the highest master in the Jedi Council and has great control over the Force. He also happens to talk in reverse; like, “Still much to learn, you have”. Weird, say I.

8. Luke and Leia Skywalker: Anakin Skywalker’s twin children who get separated at birth only to reunite years later to defeat the Sith. They share a great bond, except for that one time they kissed before they knew they were siblings. Awkward.

If you are still uncertain about the gravity of all of this, here are some deathly serious videos that shall shed more light on the Star Wars universe.

Tweets by @forbesindia
Fashion's hottest company... is based in Maine
Realty's big-brand theory