Improbable invented a new way to simulate almost any complex system in software. Warriors, gamers and economists are extremely interested 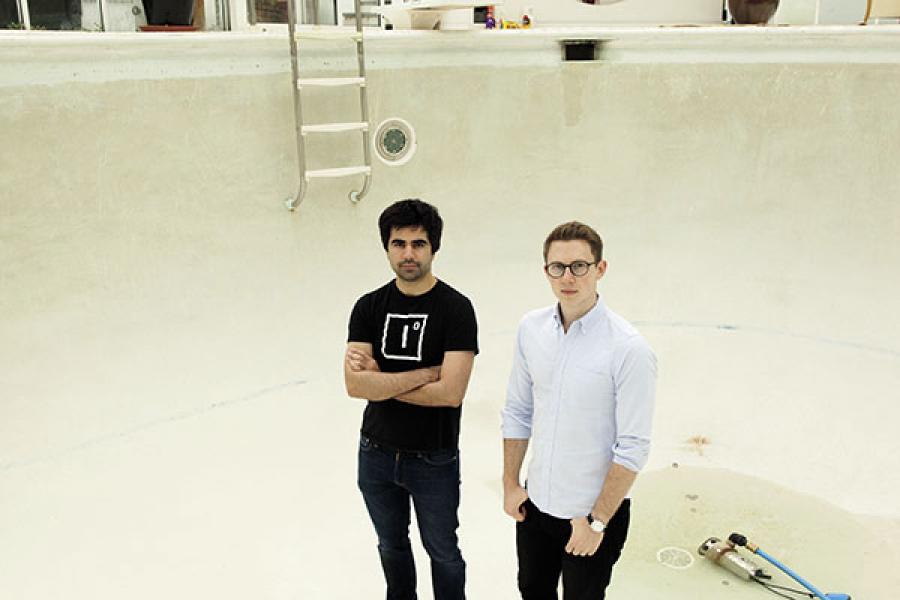 Inventing the ‘what-if’ machine: Improbable’s Herman Narula and Rob Whitehead in the pool of Narula’s family home in north London

Every Friday just after lunch, the video game developers at Bossa Studios in London’s East End take a break from all the coding to try out their own work. This spring, they’ve been putting the finishing touches on Worlds Adrift, a so-called massively multi-player online role-playing game (MMORPG) in which thousands of people float across a virtual sky on ships, attacking one another. They’re hoping to build the next World of Warcraft, an MMORPG that grossed more than $1 billion last year.

Bossa’s game could be even better, because it will be more real. Bossa turned to Improbable, another startup two miles to the west, which has invented a new way to simulate extremely complex systems. A floating fantasy world is a perfect candidate for Improbable’s sim software. Traditional MMORPGs like World of Warcraft have to take shortcuts around reality to simplify the computational load for the game. You can slay a dragon, for example, but it will respawn for thousands of other players to slay, too. But in Worlds Adrift, one player kills a dragon and it’s really dead. One day in March, as Bossa’s coders were play-testing their game, they picked up a flare gun meant only for signalling and threw it at another player; sure enough it caused a red flash on the screen, indicating an injury. “They hadn’t coded it as a weapon,” says Bossa Studios co-founder Henrique Olifers, but because the simulation was based on complex principles of physics and biology, any physical object hurled with speed did damage. The result was a world almost as unpredictable as the real one. “We never know what the game is going to be like,” he says.

Improbable was founded two-and-a-half years ago by Herman Narula and Rob Whitehead, a pair of hyperkinetic computer scientists from the University of Cambridge. In their ground floor office on a bland-looking block in Farringdon, a team of about 60 engineers from MIT, Goldman Sachs and Google sit at $40 desks writing code that could dramatically reshape not only how we play games but how large organisations make decisions.

Worlds Adrift, launching this autumn, will be the first public application of Improbable’s technology. Samsung has talked to the company about running simulations for its Internet of Things devices, and economists from Oxford are using it to run models of the UK housing market. Improbable is also “talking heavily” to Britain’s ministry of defence, says Narula, the startup’s high-octane CEO. He’s tight-lipped about most projects because of contractual obligations but says Improbable has booked revenue in the single-digit millions of pounds since launching. In March, it raised $20 million from Andreessen Horowitz at a $100 million valuation, making it one of only two startups in London to take money from the Silicon Valley venture firm. “We see a lot of stuff, and we’d never seen anything like this,” says Chris Dixon, who led Andreessen’s investment.

Improbable’s software is designed to simulate systems on an unprecedentedly massive scale: The economics of a national health care system; a nation suffering a virulent infectious disease outbreak; or the cascading effects of a hurricane on a 100-mile stretch of inhabited coastline. Improbable’s tech can also replace the mundane testing that websites run all the time on users with a far richer series of tests on simulated humans in parallel virtual worlds.

The leap Improbable made is in how dramatically it reduces the processing power needed to run complex, custom simulations. Instead of waiting for programs that move data from one server to another, Improbable unleashes a swarm of programs that dip in and out of the servers all at once. Clients provide Improbable with their own ‘worker programs’ that contain all the main components of a simulation, while Improbable manages the hard part of running the components on cloud or client servers, acting as a kind of operating system. The effect is a tool that could do for simulations what Amazon Web Services did for cloud computing. Some simulation features can even be shared between clients as part of a growing library of programs. “Improbable is trying to be the world’s ‘what if’ machine,” says Narula.

Born in Delhi, India, Narula moved to the UK when he was three. His father, Harpinder Singh Narula, ran a successful family construction business operating in Africa, India and the Middle East, and sent his son to the elite Haberdashers’ Aske’s Boys School for high school. Narula’s two brothers, the older more than eight years his senior, went on to work in the family businesses, but Narula wanted to code, teaching himself to write in C++ at 12.

While studying computer science at Cambridge, he met Rob Whitehead, a Liverpudlian who had paid his way through college by selling weapons on the virtual-world site Second Life. They began working on an ambitious virtual-world video game in which you could drop an object, then log back in the next day and find it still there. When they couldn’t find software to help them scale up, they built the tools themselves.“Eventually we realised the tech we were working on was bigger than the game,” says Whitehead. In early 2012, just months before he was due to graduate, Narula told his parents he was ditching the family business to run his own startup. “It was a bit of a shock,” he says, giving up an inheritance that could have been in the hundreds of millions of dollars.

Narula borrowed $1.5 million from friends and family to get Improbable through its first two-and-a-half years in a converted barn next door to his family home in North London, where about a dozen early staffers ate, slept and coded. Narula and Whitehead held interviews in their shower room.

Narula has no regrets about sidestepping the family business. “People think there’s security in great wealth and that people who make it in a big way must come from a hungry background.” For Narula, it’s enough to want to “build worlds and daydreams. Look at the stars. I can’t go there, but I can build the worlds myself.”