Christian von Koenigsegg produces the fastest supercars on the planet—all by hand. But can he keep up with the demand for his new $2 million Regera? And can Detroit keep pace with his futuristic engineering? 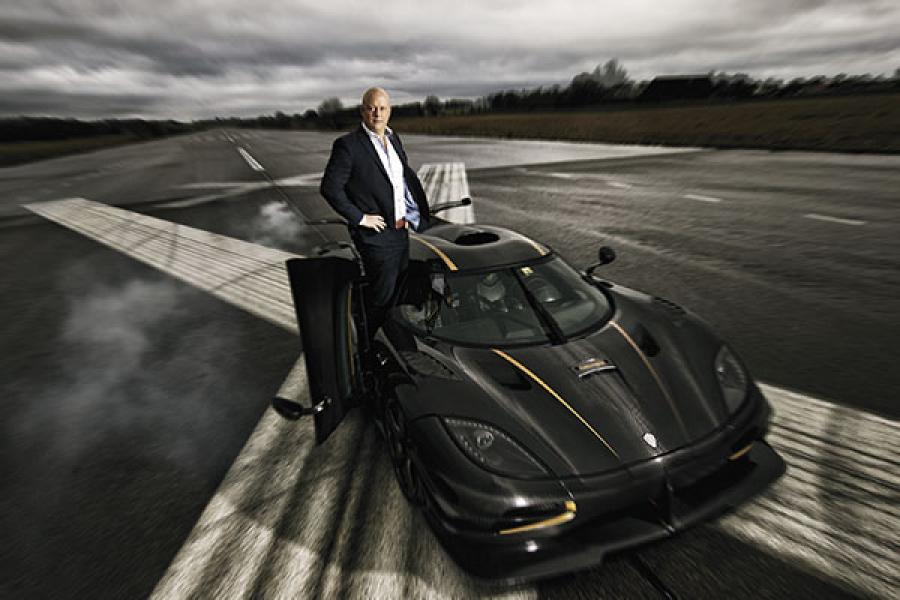 Image: Per Morten Abrahamsen for Forbes
Another gear: Christian von Koenigsegg (aboard an Agera) has stepped up production of his supercars with the 2016 release of the Regera, which can reach 250 mph in less than 20 seconds

According to the laws of the business cosmos, Koenigsegg, the Swedish supercar manufacturer, should not exist. Nor should the company—with essentially one product every few years—have been allowed to come into existence.

Consider its 2016 release, the 1,500 hp hybrid Regera. For a starting price of $2 million—slightly less outside the United States—­Koenigsegg will deliver a bespoke, barely tamed race car to a rarefied clientele. This is hard enough to do even if, like Ferrari, one has nearly a century of manufacturing, racing triumph and automotive innovation as a buttress. Neither ­Koenigsegg nor its charismatic 43-year-old founder, Christian von Koenigsegg, has any such thing. To begin with, Koenigseggs don’t race. The cars are made for a very small number of millionaires who simply want to scorch the road.

Then there’s Koenigsegg’s location: Its factory is in a former hangar on a demobilised air base once used by the Swedish Air Force’s ‘Ghost Squadron’, nestled in the remote western fishing village of Ängelholm. It’s not exactly a region known for turning out cars.

Finally, there’s the fundamental madness of manufacturing one very expensive item by hand. Over its 22-year history, the company has produced fewer than 135 automobiles—some models have had production runs of about 20 vehicles. Koenigsegg crafts its own seats, sculpts its own manifolds, builds its own engines—and all of that is surgically fitted onto its infamously tight, low-slung chassis. There’s just one lovably grouchy perfectionist who assembles the engines, but things are looking up for Mats Pettersson. With about 40 orders for the new Regera since it was announced at the 2015 Geneva auto show, and with Koenigsegg’s drive to meet the 80-car production limit, Pettersson just got an assistant. One assistant. Last year the company had about 65 employees. Some 35 have since been added.

“Was I schooled in engineering?” Christian von Koenigsegg asks as he merrily ticks off the list of his disadvantages. “No. Did I have a manufacturing background? No. Did I have access to unlimited funds or a factory that could turn out my designs? No. What I had was a friend with a garage and a passion for cars. Basically, I had no choice but to build what I thought was the best car I could make by hand.”

For a company that makes cars capable of reaching 270 mph, its early years were excruciatingly slow. In 1994, von Koenigsegg used $200,000 of his own as seed money. The next year, his father, an industrial-heating-tech executive, loaned him another $300,000. “My father didn’t know it then, but he would over the next few years invest his life savings, or about $2 million,” says von Koenigsegg. “Naturally my mother freaked out.”

Then in 1999, after the first wave of Swedish tech and telecom entrepreneurs had begun to rake in their millions, von Koenigsegg put together a group of 20 investors who injected another $2 million. He also gave shares of the company to some suppliers. And that finally got the first Koenigsegg, the CC8S, off the production line—in 2003. (Since then, Koenigsegg has engineered other long-term investment rounds, totalling about $25 million.)

“I wasn’t making anything imaginary, like the digital entrepreneurs did,” von Koenigsegg says. “I was making something that went really fast and made a lot of noise. They liked that.”

Bolstered by the supercars’ success, in 2009, von Koenigsegg put together a consortium to buy Sweden’s Saab from General Motors. The deal, which was worth an estimated $1.5 billion, fell apart at the eleventh hour when the Swedish government dragged its feet on a $600 million loan, causing Koenigsegg to pull out. Along the way his team and he have revolutionised a considerable amount of automotive tech that’s being closely watched by the industry. The Regera, for example, has a “continuous” drive-train, meaning no gearbox. And von Koenigsegg’s R&D team are working their next trick: A camshaft-free engine. Koenigsegg holds some 30 patents for its technology and has pending deals with international automakers.

Koenigsegg says it had revenue of $17 million in 2015 and projects $25 million this year. Asked about the average profit per vehicle, von Koenigsegg puzzles for a minute. “We don’t really work with that thought in mind. We have a general idea of what we make, but the costs vary so much from car to car that an average profit is not a metric we can use as a guideline.” With the profits, however, he has bought back shares from his investors, and his holding company owns just over 80 percent of the car brand that bears his name.

To walk out on the factory floor of the Ghost Squadron hangar is to understand the peculiar dynamics of Koenigsegg’s operation. For one thing, there isn’t a rivet-wielding robot in sight. The cars’ destinations reveal much about the global passion that Koenigsegg has inspired: Two were headed to Japan, one to Malaysia and two to the Middle East. With some required emissions fittings, Koenigseggs have been street legal in the United States for some time, as evidenced by Floyd Mayweather’s purchase of a CCXR Trevita for $4.8 million last year on the robust secondary market. Because of their extreme exoticism even within the exotic world of supercars, older Koenigseggs hold their value better than, say, Bugatti Veyrons.

But at the moment, Christian von Koenigsegg can’t appreciate that for himself. He doesn’t actually own one of his extraordinary vehicles. He prefers to make them and put them on the road. One supercar at a time.

Tweets by @forbes_india
Starbucks and Tatas deepen their partnership - in India and abroad
Stitch Fix: A profitable $250 million retail disruptor