Left for dead, Dave Morin’s private social network is getting a second life 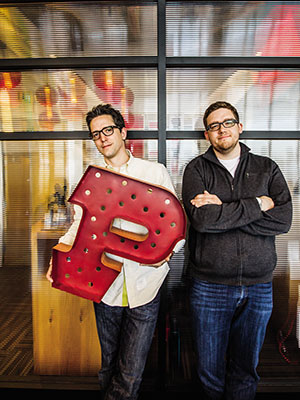 Dave Morin pledges that no advertisement will ever touch his social network, Path. “Yes! Feel free to say it definitively,” he crows in his conference room in San Francisco. “We don’t believe you can provide the kinds of privacy we want by doing it any other way.” Quite a claim, especially in a startup world where the mantra is “Get users, get ads, get a big valuation”. But Morin has always gone against the grain. In January 2010 he quit a plum job at Facebook to create its antithesis: A private, mobile-only network dubbed Path that connected you to close family and friends. Just a month after launching and with only 10,000 users, Morin turned down a $100 million buyout offer from Google. Morin calls it his darkest day at Path but shrugs: “We made this choice to swim against the current culture and commit to thinking for the long term.”

For a while that choice looked misguided. Path’s fast start fizzled. Growth stalled. The hype faded. Many in the Valley wrote off Path as a niche network not long for the web and Morin as a cautionary tale of over-ambition. For two years Path survived, trudging along as it added users slowly. But this winter something unexpected occurred: Path started to catch on. The platform, which had only 5 million users in January, surpassed 20 million by end of August. Investors are again taking notice and, with a likely valuation north of $300 million, rejecting Google’s offer doesn’t seem so foolish.

Path is a mobile app for sharing your private life with an exclusive group. While big platforms like Facebook and Twitter are polluted with ads, various media and that guy you haven’t spoken to since middle school, Path links you to people you actually want to get baby pictures from. Let Facebook be the noisy mega-club, Path would be the intimate dinner party. It originally maxed you out at 50 connections, later raised to 150. “It’s a pretty audacious thing they’ve set out to build—a new kind of personal network,” says John Doerr, the billionaire venture capitalist at Kleiner Perkins Caufield & Byers, which has invested in Path. “They serve a fundamental human need to be really close to the people you care about.” Says actor and Path investor Ashton Kutcher: “It’s my default social network, a safe place to share my life with the ones I love.”

But intimacy and virality don’t mix. In June 2012 Path had 3 million members. Meantime, Instagram, the hot photo-sharing platform that launched around the same time, had about 30 million users (it would later be scooped up by Facebook for $715 million). Path was at a crossroads—it was scale or fail.

Last December Morin and co-founder Dustin Mierau made the decision to lower Path’s guardrails. They partnered with Twitter to let users spread their Path profiles. In May they let users invite others to Path through Twitter’s direct-message system and through Gmail. Thanks to these tweaks, Path’s registered-user count hit 10 million in April and passed 20 million by end August. Moreover, Path has proved sticky, with active users checking the app an average of 19 times a day. The typical active Path user spends 20 minutes a day on the app, compared with 17 minutes for Facebook and 3 for Pinterest. Path, which previously raised $41.2 million (from the likes of Kleiner, Index Ventures, Marc Benioff and Richard Branson), is using its growth spurt to raise another round.

Morin grew up in Helena, Montana, and skied for the northern division of the US Junior Olympic team, got his first taste of Silicon Valley working in Apple’s college marketing division. He toyed with founding his own startup until Sean Parker lured him to Facebook in October 2006. Morin was running Facebook’s developer platform when a trip to India in late 2009 changed everything. There for the wedding of Dropbox’s Ruchi Sanghvi and Aditya Agarwal—as were Mark Zuckerberg, Dustin Moskovitz and crew—Morin came across a report by tech analyst Mary Meeker predicting mobile devices would eclipse desktop PCs by 2013. Something clicked. “I thought, ‘Oh, my God, all my skills will be worthless in three years,’” Morin says. “I had three years to build a company so that by the time the mobile internet arrived it will be able to compete.” A month later he quit Facebook to start his own company. All he needed was an idea.

During this period Morin had been meeting pals Shawn Fanning (a founder of Napster) and Dustin Mierau (founder of Macster) to talk trends and future companies. One night, the three discussed how social networks were becoming cold, isolated places instead of places to bring people together. They got to work on an intimate network.

For a company focussed on privacy, Path has had more than its share of embarrassing snafus. In February 2012, it was caught uploading users’ address books to its servers to find other friends on the network and later paid an $800,000 fine to the Federal Trade Commission. Other companies were doing similar things, but Morin apologised and deleted the uploads.

Path faced similar questions last April when it was accused of spamming users’ friends with SMS messages in the UK. Facebook then blocked Path’s ability to find Facebook friends. Facebook has never said why, but the spam issue is one likely reason, and Facebook increasingly views Path as a competitor. “We made a mistake, and it’ll probably follow us for a while,” Morin says.

Another challenge facing Morin: How to make money. By swearing off ads, it’s having to turn to selling virtual goods such as emoticon-like ‘stickers’ and photo filters. While these have brought in a bundle for Japanese messaging app Line, its revenue rate of $0.48 per customer would play out to only $9.6 million a year for Path. Facebook has 2 percent or fewer of its 1.15 billion users buying virtual goods, says Michael Pachter of Wedbush Securities. Stickers are not a business.

So Morin plans to roll out a premium subscription this quarter that gives users special content, features and storage. That’s the model used by note-taking app Evernote. Some 4 percent of its 65 million users pay $5 a month or $45 a year for extra features. But Evernote and other so-called freemium products like Dropbox have lots of business clientele. Odds are against Path getting people to pay when every other social network is free.

Another option: Building an app platform, a topic Morin knows well from his Facebook days. Path has  developers posting photos, videos, data from Nike+ runs and bicycle rides, even Bible verses. But it needs a Facebook or Twitter-size audience—say, a few hundred million—to cash in on the platform approach. “Path isn’t publishing, and it’s not content. It’s a longer road,” says Morin. “And that can be hard at times.”