For four generations, the D'Addarios have excelled at producing violin and guitar strings with small innovations that make a big difference 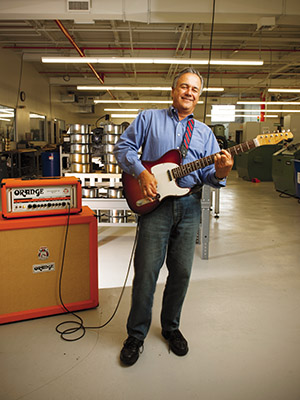 Image: John Emerson for Forbes
From the basement to the factory floor: Jim D’Addario (above) and brother John Jr have been part of the business since it evolved from animal intestines to nylon and round-wound steel strings

In a 240,000-sq ft factory an hour east of New York City, several hundred workers buzz from shift to shift making strings for guitars, violins, Greek bouzoukis and Turkish ouds, some 700,000 per day. Groups of workstations wrap thin nickel or bronze wire around steel strands—all with laser-measured precision. Product is counted, packed and shipped around the world. The machines are off-limits to outsiders since their designs are proprietary and a close-kept secret. Jim D’Addario, the 65-year-old CEO of a business started by his grandfather, surveys the floor with undisguised pride. He and his older brother John put much of it in place. “When I think of my grandfather’s shop, I could never have imagined we’d be able to bring the business so far.” It is a far cry from how it used to be done when the brothers descended to their grandparents’ basement in Queens, New York, in the early 1950s, where sour-smelling animal intestines stretched on racks were twisted into string bound for violins, cellos and harps. Their grandfather, Charles D’Addario, toiled all week with a supporting cast of a half-dozen employees and family members before packing up products to be sold out of his car to luthiers and players from Boston to Washington, DC. “He would dress up in a three-piece suit every day and then put an apron over it,” says Jim. “Even if it was 98 degrees, he went downstairs and worked.”

Last year, D’Addario netted an estimated $12 million on $169 million selling musical accessories, expanding at an average of 6.2 percent a year during the past decade. Its wares are endorsed by musicians such as Lenny Kravitz, Keith Urban, Peter Frampton and Dave Matthews. The company has also staked a claim on drums, horn reeds and basic accessories, deriving half its sales abroad. “In every product category they compete in, they’re either number one or two,” says Brian Majeski, market watcher and editor of The Music Trades magazine. D’Addario has maintained that perch by experimenting with a commodity good and refining it through small, but significant, innovations. The family traces its craft back to 17th-century Salle, Italy. It first brought its string trade to the US after a 1905 earthquake destroyed the town. Two brothers, Charles and Rocco, put down roots in the Astoria neighbourhood of Queens (Rocco moved back to the old country soon after), first importing, then making, strings sold for $2.50 a dozen. It was Charles’s son, John, the family’s second-generation CEO, who recognised the benefits of synthetic material, like DuPont’s new creation, nylon, invented in 1935. “A lot of harpists were impressed because the strings stayed in tune longer and weren’t susceptible to moisture and humidity,” recalls John Jr, 71.

Charles held back when Elvis and the folk boom brought the guitar into the spotlight. “My dad was a little more ambitious and curious,” says John Jr. So John Sr split off in 1956 to form the Archaic Musical String Manufacturing Co (later renamed Darco Music Strings) to make steel strings for the likes of CF Martin, Gretsch, Guild and D’Angelico. (It merged with D’Addario six years later.) He made his string’s steel cores hexagon-shaped instead of cylindrical, which gave the wires wrapped around them something to hold on to, creating a stable string that rang true. He also nickel-plated his steel—an industry standard to this day. John Jr gravitated to the business end. Jim was a guitarist and a techie. By the late 1960s, Darco was pulling in $600,000 in sales, but in danger of disappearing. CBS had bought Fender, Steinway and other instrument makers; Norlin Corp had swallowed Gibson and Lowrey, the organ-maker. To survive, John Sr decided to sell Darco to Martin, which represented 30 percent-plus of sales. The marriage didn’t last: Martin projected great growth through a public offering that never happened and a couple of acquisitions that failed. The D’Addario family exited in 1974 to start up again.

Time for John Jr and Jim to run the show. Their dad’s move-fast-and-break-things MO conflicted with their ideas of order and market research. “It was almost a grocery store mentality,” says Jim. “He wouldn’t be able to comprehend what we have to do today.” In that first year, with 20 employees, D’Addario pulled in $1 million. “Last Friday,” Jim says, “we booked $2.7 million in one day.” Over three decades, as the business expanded, they continuously tweaked their automated equipment. “Whenever a major innovation was developed, we would retrofit the entire fleet of machinery,” Jim explains. Examples: modifying winding machines with high-end motors that eliminated human error, and using digital controls to adjust the wire tension to within a tenth of a pound. “I used to build the control panels in the basement of our home after dinner,” recalls Jim. Incorporating Toyota lean-production efficiencies in 2007 helped cut product reject rates from 3 percent to 0.2 percent. “With competitors like Martin and Fender making strings in Mexico at lower cost,” Jim says, “we needed to be the highest quality low-cost producer.” Yet, in the pit of the 2008 recession, the company cut Chinese-built components from 13 percent to 5 percent. D’Addario also picked up tricks of efficiency by acquiring companies. Among its grabs: Evans Drumheads, ProMark Drumsticks and PureSound Percussion, as well as Rico Reeds, which pitted it against rivals like the German Pirastro and the French Vandoren. In guitar strings, D’Addario competes with Ernie Ball, Elixir Strings and Martin. Last year, sales of accessories reached $500 million in the US, an intermezzo compared with the $3.1 billion worth of musical instruments.

But the category is actually growing—by more than five percent. Why? Guitars, violins and horns are better made these days and don’t need to be bought as often, says Joe Lamond, president and CEO of the National Association of Music Merchants. But drumsticks, strings and sax reeds are not optional buys, he says. “Those consumables need to be replaced frequently.” One thing that doesn’t seem to wear out is family management talent. John III, the 43-year-old president, worked at the factory every summer in shipping and receiving. After graduating with a business degree from the University of Richmond and spending three years with a cosmetics maker, he came home to D’Addario, learning engineering, product development, PR and sales. (While there are more than 30 family stakeholders, few are chosen for leadership.) “To this day, when I walk in the door here, I know I’m under the microscope,” John III says. “And every subtle thing that I do is closely looked at.” J3, as he’s known, is doing his own close look—at the future. “I see us investing considerably in time, resources and money in newer, higher-quality raw material,” he says. As in? That’s another trade secret.

Tweets by @forbesindia
Can Biocon Join The $1-billion Club By 2018?
Reforms: The Way To Revive Deal Street