The Fight Over Online Gambling in the US

George Soros, John Paulson and Leon Cooperman have secretly moved into battle mode against Sheldon Adelson. The stakes: The future of gambling in America 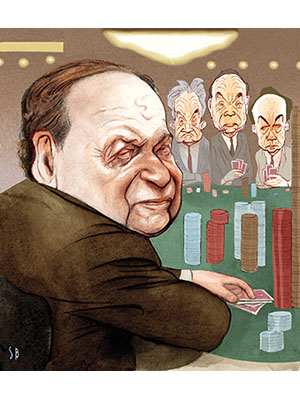 In November, George Soros, John Paulson and Leon Cooperman, three of the most successful hedge fund managers ever, quietly participated in a rights offering and became major shareholders in Caesars Acquisition Co, a spinoff from casino company Caesars En-tertainment that has ownership in Caesars’ online gambling assets.

Their stakes—previously unreported—are all part of an unprecedented bet on the future of the $60 billion casino business in America, as states from New Jersey to Delaware and Nevada legalise a practice that the Department of Justice said was illegal just two years ago. They were joined by billionaire private equity managers Leon Black, David Bonder- man, Marc Rowan and Joshua Harris, whose two respective buyout firms are the biggest shareholders in Caesars Entertainment and doubled down by investing a combined $484 million in Caesars’ online gambling vehicle.

There’s just one problem with all of this: Sheldon Adelson. The very week that Caesars’ online gambling play started trading on the Nasdaq, Adelson, the nation’s fifth-richest man—and one of the country’s biggest political donors—thanks to his vast casino holdings, unleashed an army of lawyers and lobbyists on Washington and state capitals, telling Forbes he will “spend whatever it takes” to stop online gambling in America.

His advocacy group—the Coalition to Stop Internet Gambling—is working to get state attorneys general to sign a petition against online gambling. He’s hired former New York governor George Pataki, together with former Arkansas senator Blanche Lincoln and former Denver mayor Wellington Webb, to lead the lobbying effort. “There is no reason to put a casino on everybody’s kitchen table, in the bed of every young person, whether they are underage or of age, or on mobile phones,” says Adelson. “I don’t want people to get addicted.”

So far, the markets are betting he’ll lose. Shares of Caesars’ online gambling spinoff are up more than 30 percent from their rights offering price. But while Adelson’s moralistic stance may be laughable to opponents, given the potential long-term threat a shift to online gambling poses to his industry, they still take it seriously. His Las Vegas Sands, with a recent stock market valuation of $60 billion, is worth more than all the other US casino companies combined. Adelson spent some $100 million unsuccessfully trying to get a Republican into the White House in 2012. “What I have heard Adelson say is, ‘I am very rich, and I don’t like internet gaming,’ and those things are true,” says Mitch Garber, CEO of Caesars Acquisition Co. But, “Sheldon’s eyes are closed to the fact that all goods and services are ultimately going to be purchased on the internet”.

For years, online gambling in America belonged to offshore companies willing to take on the federal government, which declared all online gambling to be illegal. In 2003, online poker took off when Christopher Moneymaker, an unknown accountant from Tennessee, qualiﬁed in an online tournament for the main event at the World Series of Poker and won poker’s top prize. Online poker companies became big sponsors of poker programming on cable outlets. By 2005, the company that ruled the US online poker market, Gibraltar-based PartyGaming, conducted an IPO on the London Stock Exchange that made its American founder, Ruth Parasol, the nation’s richest self-made woman.

But, in the fall of 2006, Congress passed the Unlawful Internet Gambling Enforcement Act (UIGEA), strengthening the justice department’s tools to go after online gambling ﬁrms operating in the US. Some companies quickly ceased their US operations, leaving the then $1.4 billion US online poker market dominated by two offshore companies, PokerStars and Full Tilt Poker, which proﬁted immensely because of the high-margin nature of the business. But federal prosecutors and agents kept investigating the companies, seizing their funds and eventually in 2011 shutting down the websites of the major online poker companies that cater to the US and indicting their founders. In the weeks that followed, Full Tilt collapsed amid accusations made by the US attorney in Manhattan that it was operating a Ponzi scheme. PokerStars settled the civil charges the government ﬁled against it by paying $731 million, but its founder, Isai Scheinberg, who is not a US citizen, has not come to the US to face criminal charges. The government also indicted Ayre, a Canadian who has also not returned to the US.

Not long after shutting down the offshore operators, the Department of Justice reversed its long-held opinion that all forms of online gambling are illegal, unleashing states that wanted to regulate and tax online gambling except sports betting. Sensing proﬁts, the billionaires followed.

Why the turnaround? Expensive lobbyists and lawyers are a big part of the answer. Since 2007, for instance, former New York senator Alfonse D’Amato has been paid to be chairman of the Poker Players Alliance. That Washington lobby group received funding from the Interactive Gaming Council, a Vancouver group backed by ﬁrms including Full Tilt Poker. The American Gaming Association, the casino industry’s powerful lobby, is now backing online gambling.

The stakes are huge: Private equity ﬁrms Apollo Global Management and TPG are still trying to salvage their 2006 LBO of the company that left it saddled with $28 billion in debt. They see online gambling as a way to make up for Caesars’ missing out on Macau.

So while Adelson’s limitless money may slow the momentum for online gambling by blocking its spread into big states like California and Florida, the odds of him stopping it or bullying his rivals out of the game are slim. He’s got lots of chips, but all the other players at the table do, too.