Paul Reed Smith knows he can’t outsell Gibson and Fender. So, he’s trying to turn the humble guitar into a Stradivarius 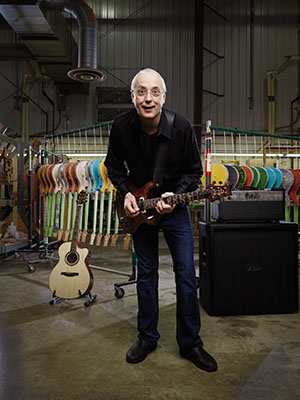 Image: David Yellen for Forbes
Paul Reed Smith, 57, began building guitars as a teenager in his bedroom with parts from a Washington

Guitar overlord Paul Reed Smith is so fanatical about quality that he has grabbed less-than-perfect instruments from his luthiers and sawed them in half. “My company survives only if there are 10 guitars on the wall of a music shop and the customer likes the one we made the best,” says Smith, who founded PRS Guitars back in 1985. “So, I see it as survival.”

Survival is tough in this business of handcrafted goods. PRS may be a favourite of such artists as Carlos Santana, Orianthi and Jimmy Buffett. But with 2012 revenues of $43.5 million, it’s difficult to be heard over bigger rivals Fender Musical Instruments ($350 million) and Gibson Guitar Corp ($325 million). Smith must try to squeeze out profits wherever he can. So in January, he paid an undisclosed sum to acquire his UK distributor, with the idea of selling direct to retailers in Europe by year-end.

Smith, 57, began building guitars as a teenager in his bedroom with parts from a Washington, DC violin shop. He didn’t have the money to buy higher-end models: “The only way I could get them was to make them.” Dropping out of St Mary’s College of Maryland, he proved more successful at stringing than singing. “If I played guitar, people would run. If I opened the case of a guitar I’d built, people would gather in a crowd,” he recalls.

PRS guitars are constructed of selected mahogany and figured maple, kiln-dried until they register exactly 6 percent water content, sanded five times, followed by eight very thin coats of finish. Fingerboards have mother-of-pearl inlays of birds in flight or multicoloured dragons. The pickups are designed in-house. Average retail price: $3,000, though some limited-production models can sell for up to $60,000. This year, the Stevensville, Maryland plant will turn out 13,000 guitars; another 25,000 models (the $700 Student Edition) are made in Incheon, South Korea.

Smith caught a break in 1975 when, a guitar under his arm, he managed to get backstage to meet Ted Nugent and told him, “If you don’t fall in love with the guitar, you get your money back.” Nugent still has it. He repeated the act at a 1980 Carlos Santana concert. Thus started a musician-builder relationship that continues. With Santana as an endorser, Smith gained credibility among musicians.

And among well-known retailers, like Rudy Pensa. He first encountered Smith in the late 1970s. “I looked at the quality, I said, ‘My God, this looks good, and they play great’,” says Pensa, who sells 40 to 50 PRS instruments per year from his two shops in New York and keeps several PRS models in a vault with his own prized collection. One is special. “Every time I grab the guitar,” he says, “it’s like I have a Stradivarius in my hand.”

That’s what Smith is aiming for. “It takes 10,000 hours to get good at anything. I think it took me 40,000,” he laughs. “Guitarmakers don’t get good until they’re 50, right?” Gibson’s onetime president, McCarty advised Smith for over 12 years on such critical details as the construction of bridges and wiring of pickups.

Building PRS, Smith took care of his workers, offering discounts on custom guitars and throwing parties and music festivals. But he was also a demanding boss. “When Paul spoke, everyone listened,” says a former employee. “You definitely knew when he was in the building, and you definitely watched your ass.”

Because high-end electric guitars are a discretionary luxury, PRS was hit hard in the Great Recession, with sales dropping 12 percent in 2009. A long line of back-ordered products helped some, and PRS revenues jumped 30 percent in 2010. “Things are better now, but they ain’t great,” says Smith.

Headline Music founder and CEO Gavin Mortimer says new orders from European retailers have been cascading in. “The first to call were the Germans,” he says. “That market is the biggest in Europe, and they have more to gain.”

Mortimer has been focusing on PRS—one of only three brands he carries— since 1999. “If you’ve got 20 children, it’s difficult to read them all a bedtime story and kiss them all good night,” he says. (In addition to PRS, Headline will continue to carry Visual Sound pedals.)

It’s not unusual for buyers in England, says Mortimer, to drive 300 miles to buy a PRS. “Anyone around Paul will tell you that he’ll come in and say, ‘This is the best-sounding, greatest thing!’ and then two weeks or a month later, he’ll say, ‘No, scratch that. This is it!’” Mortimer says. “He never stops searching and probably never will. It can be very frustrating. It’s also quite inspiring.”

Obsession? Smith prefers to think of his work as an infatuation. “Love is the fundamental core of doing a good job,” he says over the phone from Boston. “I can’t ask people to love their work when they come to PRS. But if you want to get that thing sanded perfectly, you’re going to have to love it.”

Tweets by @forbes_india
Why Jugaad might make sense to the rest of the world, but not to India
10 Indian Films With Immortal City Sketches 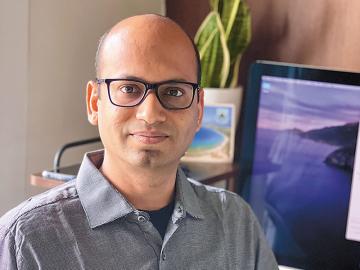