This $ 52-million startup spotted a bright opportunity in LED lighting 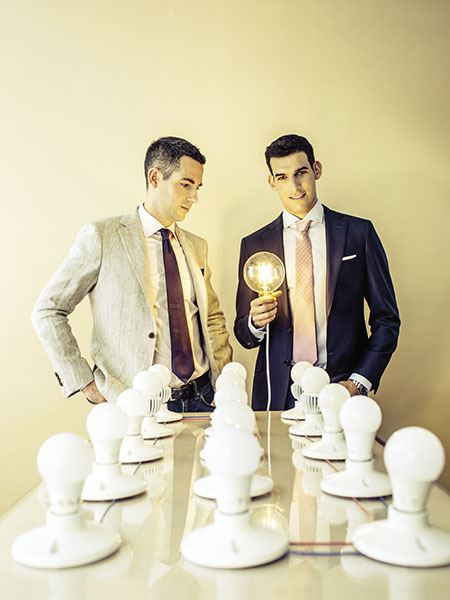 Haute lighting: Guillaume Vidal (left) and Cole Zucker design their own lights, comparing the process of adding components to that of a chef mixing ingredients
Image: TimoThy Archibald for Forbes


As Cole Zucker drives through San Francisco’s Mission District in his white BMW M4, he uses one hand to steer through busy intersections and the other to flip through women’s profiles on a dating app. It’s a big change from the weekday evenings in the spring of 2011, when Zucker would drive his Mazda 3 the roughly 40 miles from San Francisco to San Jose and park on a residential street around midnight. He’d get into the backseat, hang clothes over the windows for privacy and go to sleep. Four hours later, knowing it was the best time to catch them, he’d walk into one office building after another, looking for building engineers who might want to buy his startup’s lighting products. Nearly every one of them turned him away.

Six years later, Zucker, 33, and his 35-year-old co-founder, Guillaume Vidal, are co-CEOs of Green Creative, a profitable lighting manufacturer with 70 employees and $52 million in revenue. Their bulbs illuminate the aisles of many Walmart, Whole Foods and J Crew stores. In a market dominated by Philips, GE and Osram Sylvania, Vidal and Zucker saw an opening when LED technology started to take off. They bet that the giant firms were ill-equipped to make the most of the rapidly evolving technology. “We used to worry about whether anyone would buy LED products,” Zucker says. “Now we worry about how to maintain our breakneck growth rate.”

The big draw of LED bulbs, of course, is efficiency. They use up to 75 percent less energy than incandescent ones and last 25 times longer. Even today, LEDs represent less than 10 percent of the US market, but they’re gaining fast.

Around the time LEDs started to catch on, Zucker was fired as a fixed-income research associate at Prudential. He had entrepreneurial aspirations and became fixated on China. To his parents’ dismay, Zucker, who had studied Mandarin in college, moved to Shanghai in 2007 with $3,500 in savings and no prospects. He eventually secured a job in sales for a lighting and flooring company.

Vidal, who is from the south of France, started working in marketing in 2004 at a Hong Kong supply- chain company, helping clients with everything from shipping and logistics to finding lighting manufacturers. Two years later, he was opening a new office in Shanghai. “It’s Asia,” he says. “As soon as you have a little bit of understanding or people start trusting you, they will just throw crazy opportunities at you.”

LEDs represent less than 10% of the US market, but they’re gaining fast

Vidal later joined Tao Light, a Chinese lightmaker that supplied bulbs to Osram Sylvania, and began working closely with Osram’s R&D and marketing teams. He had a front-row seat when the industry changed direction and LED technology became a plausible option for every type of light. At that time, it took Osram roughly 18 months to bring a new product to market, according to Thomas Dreier, then a manager at the company. Vidal saw an opportunity, and he and Zucker—the two had met through a mutual friend—decided to start Green Creative. They focussed on the business-to-business market, supplying bulbs for commercial real estate buildings, hotels and retail outlets.

In the winter of 2010, Zucker moved to San Francisco to handle sales, while Vidal stayed in Shanghai to find a factory that could make the lights. Thanks to his network and experience, Vidal landed a factory that was also a major Philips supplier, persuading it to create a small volume of highly customised products—an unusually favourable agreement for a startup. Vidal designed Green Creative’s bulbs himself, choosing from a wide range of components to create a bulb that projected light at the right angle, covered the right amount of surface area, had the proper intensity and didn’t get too hot. “We’re a little bit like a chef in the kitchen,” he says, “except that the ingredients are getting a lot better all the time.”

Even so, their first lights, Zucker says, were terrible—“junky-looking” and half as bright as competing products. For their second generation, launched a year later, they made big leaps but struggled to get customers to take a chance on a tiny startup with no track record. For prospective buyers, Zucker says, “it was pretty much name your price. We hoped it wouldn’t kill us on margin.”

Over time, Zucker learnt to focus on distributors, which gave him access to a larger base of users. In 2011, Green Creative reached $300,000 in sales, but the company was operating on only the $200,000 in savings the founders had invested. Their first office, in a refurbished San Francisco parking garage, was infested with rats. Besides sleeping regularly in his car, Zucker was eating mostly peanut butter and jelly sandwiches. His mom began sending him brochures for law school and MBA programmes.

By the end of the next year, sales were more than $2 million, but the partners hadn’t been watching the books closely. Vidal came to the stark realisation they owed suppliers more than $1 million and were not going to be able to pay on time. “They weren’t real balance-sheet-based people,” says Jerry Mix, an industry veteran. Vidal and Zucker set about contacting everyone they knew to ask for money. While few people bit, the partners persuaded Mix and some friends and family to invest $250,000. Shortly after, they landed a bank loan of $1.25 million, secured against their inventory and receivables.

Zucker had never gotten any formal sales training, but after a couple of years of trial and error, he was improving. “He’s one of the better I’ve ever run into, and we have 480 vendors,” says Spencer Miles, general manager of the distributor Pacific Lamp & Supply. Zucker says he called one distributor 20 times over two years before landing him. Sales quadrupled to $8 million in 2013.

The next year, Vidal and Zucker made a strategic shift—they stopped competing on price, focusing their pitch more on quality and service.

Sales reached $52 million last year, but Green Creative is now trying to transfer its success in bulbs to “fixtures,” the larger, more expensive lights used to illuminate office buildings. The fixtures market reminds them of where bulbs were four years ago. “The opportunity,” Zucker says, “is just enormous.”

Tweets by @forbesindia
Meet the secretive billionaire who makes the cheese for Pizza Hut
Book review: Four Seasons in Rome