Even before the pandemic sent markets tumbling, Advent Capital's Tracy Maitland was prepared for the mayhem. In good times, his portfolio tracks the market, but during downturns it's a refuge from the storm 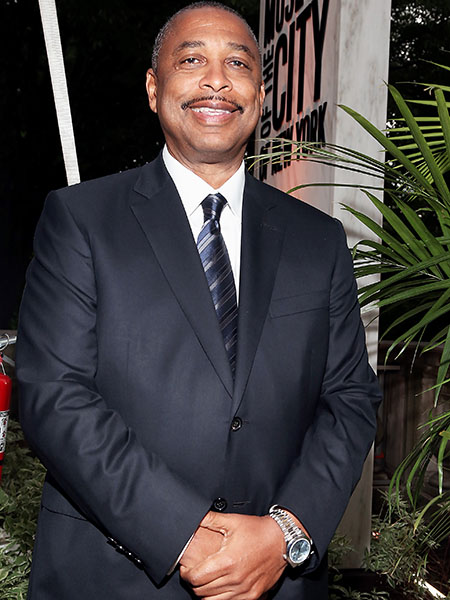 It’s a standard Wed­nesday morning at Wall Street. Tracy Maitland, 59, operates his $9 billion (assets) investment firm via email and Cisco videoconference calls. His task this morning is to navigate a trading day in which the Dow Jones Industrial Average will open 5 percent lower, then plunge more, tripping a trading halt, eventually closing below 20,000 for the first time in over two years.

In normal times, Maitland leads the 8.30 am research meeting of his firm, Advent Capital Management, from a Manhattan corner office on 57th Street. Today, he beams into homes across the New York metro area to check on traders and portfolio managers from his Southampton mansion, as his Cane Corso, Kenya, and two Olde English Bulldogges, Bailey and Tucker, frolic nearby.

When the coronavirus outbreak spread, Maitland’s team of about 20 investors completed a “burn-down scenario analysis” of their portfolio in search of companies lacking the cash flow to survive a pandemic-driven 10-60 percent sales crunch. They trimmed holdings in furniture retailers like Restoration Hardware, Guess, cruise-ship operator Carnival and Six Flags, and boosted positions in technology and health care.

Now, an hour into trading this March 18, he’s comfortable enough to be philosophical about the losses. “When you have a market like we’ve had since 2008, with stocks consistently going up, people don’t think about being defensive,” says Maitland, a veteran trader. “It’s kind of like if you had a house and nothing bad happened for 20 years, so you stop buying insurance.”

At the March lows, Advent’s biggest funds were down by 14-20 percent for the year because they specialise in convertible bonds, a hybrid fixed-income and equity security that offers some of that insurance investors seem to have forgotten. While there is nothing to celebrate, the losses represent far less pain than the 30 percent drubbing of the S&P 500 Index, and some of Maitland’s convertible-oriented hedge funds gained 8-10 percent. That’s a typical result. Since the mid-1990s, his two largest strategies ($4 billion in assets), Advent Balanced Convertible and Advent Defensive Convertible, have returned after fees, about as much as an S&P 500 Index fund, with less risk.

Like a bond, convertibles pay coupons and get repaid in full at maturity, typically in five to seven years. If a company issuing a convertible soars, Mait­land has the option to convert his notes into stock in the underlying company at a price set when the bonds are issued. During boom times, convertibles act like options, rising in value alongside equity valuations. But if the economy languishes or tanks, investors get the benefit and security of coupon interest payments and a fixed maturity value.

This is not the first time Advent’s convertible strategy has been put to the test. Maitland’s team performed “burn-down” portfolio reviews during the September 11 terrorist attacks as well as the 2008 financial crisis. He credits these fire drills for helping his firm avoid notorious dotcom flameouts like the convertibles of JDS Uniphase and DoubleClick. In both routs, Advent’s funds fell far less than market indices and recovered faster.

“The idea is winning by not losing,” says Maitland, who’s yet to see a convertible holding go belly-up in Advent’s 25-year history. “Right now,” he booms, “in our defensive portfolio, the yield is approximately 5 percent with four years to maturity on companies we’ve done a burn-down analysis on. That’s a wonderful way to be in this marketplace.”

Raised in the Bronx, Maitland is the son of one of the surgeons at Harlem Hospital who operated on Dr Martin Luther King Jr when he was stabbed at a book signing celebrating his narrative of the Montgomery bus boycott. The surgery saved King’s life, and Maitland’s father, Leo, became chair of Harlem’s Sydenham Hospital and the doctor to celebrities, including Miles Davis.

In 1978, Maitland matriculated to Columbia University but instead of medicine (“I didn’t like blood or diseases,” he says) pursued finance and took a job at Merrill Lynch after graduation, eventually landing in the firm’s Detroit offices.

His big break came in 1985, when Merrill invented a hybrid zero coupon bond that could be converted to cash or stock called “liquid yield option notes”, or LYONs. For issuers, the interest was tax deductible, even though they didn’t have to make cash payments until maturity, and if markets rose and investors converted the LYONs to stock, the bonds never had to be paid back. LYONs were a big hit for Merrill, and Maitland became a top producer, selling them to major clients like billionaire investor Howard Marks, then at Trust Company of the West. “You could make money and you couldn’t lose, as far as I could tell,” says Marks of LYONs.

Eventually, Maitland returned to Merrill’s New York offices in 1987 and became head of convertible sales, a backwater at the firm. “Even though we were the most profitable unit in the firm for many years, we were still a sideshow,” he says.

In 1995, he spun out his operation, dubbed it Advent, and began to forge a reputation for weathering turbulent markets. His strategies range from defensive convertibles to riskier high-yield bonds and hedge funds. Each has returned between 7 percent and 8 percent annually since inception. His small publicly traded closed-end fund, Advent Convertible and Income, has underperformed, in part because of leverage—it’s down by 27 percent year to date, erasing its 2019 gains, and sells at a 10 percent discount to its net asset value. 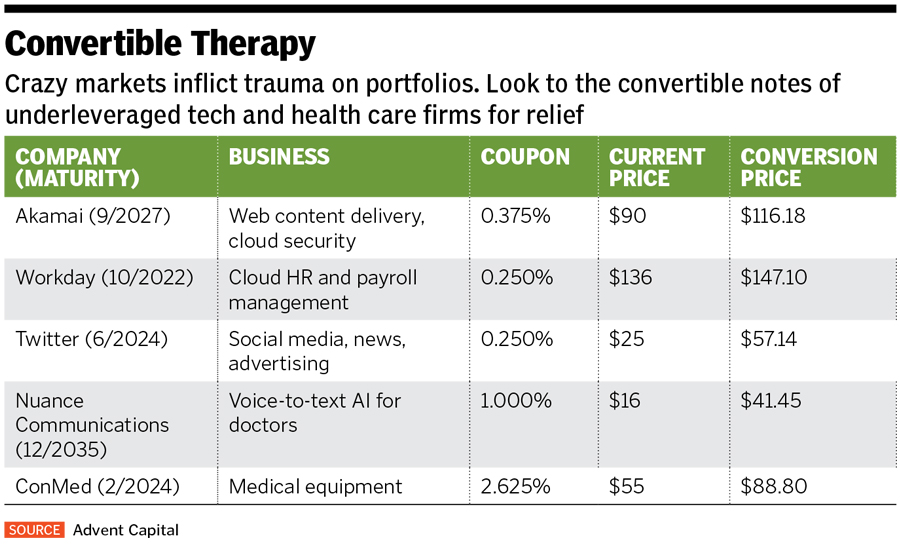 Maitland, now worth an estimated $250 million, has made gossip pages as a Wall Street booster for former US President Barack Obama, though he’s no bleeding heart. He calls Queens Congresswoman Alexandria Ocasio-Cortez “financially illiterate” for her attacks on Amazon. “Demonising people who are successful is not in the nation’s best interest,” he sniffs.

Currently Maitland is loading up on the convertibles of unleveraged technology and health care companies. Advent’s conviction buys include Akamai Technologies, which sells cloud infrastructure to web and streaming businesses; Workday, a payroll provider; and Twitter.

Akamai’s cloud-networking infrastructure will benefit from rising web traffic by stay-at-home workers, and it carries minimal debt. “For many tech companies, the convert is only debt on the balance sheet,” Maitland points out. Workday might be an even safer bet. The software firm has $1 billion in net cash and reported 30 percent revenue growth last year. Given the recent market slide, all of Maitland’s holdings have significant conversion premiums—meaning their underlying equity sells for a price well below the notes’ designated conversion price.

Twitter’s convertible, issued in June 2018, trades at just 87 cents on the dollar, but Maitland sees little risk. “Twitter has a fortress balance,” he says, citing its $3.8 billion in net cash. Twitter’s stock needs to rise above $57 from its current $25 for its convertible to be worth exercising.

Says Maitland, “If you’re disciplined and you’re able to evaluate credit, this is creating real opportunity.”

Tweets by @forbes_india
Photo of the Day: A disabled man grapples with the impending Cyclone Nisarga
'People treat me like a Covid-19 carrier': Day in the life of a repairman