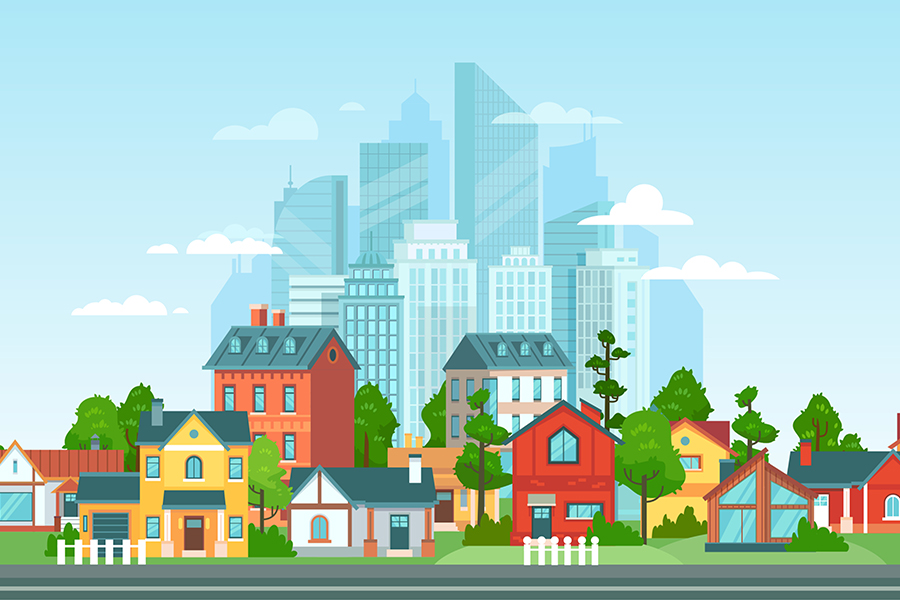 Urbanization and COVID-19
More and more people have been moving to cities in recent decades. United Nations predictions find that, while 55 percent of the world’s population already lived in an urban area in 2018, that number is expected to rise to 68 percent by the year 2050. Traditionally, academics have viewed increased urbanization as a result of industrialization, but this is not the case for the modern city. Many current researchers believe that people continue to be drawn to cities, not because of industrial job opportunities, but rather due to differences in offered amenities.

Increasing urbanization can prove challenging in the new era of COVID-19 social distancing guidelines. Unlike residents of rural and suburban areas, residents of cities typically rely on business establishments for daily functioning: trips to the laundromat and public transportation are essential for urban life. High population density is a related urban-specific difficulty; suburban and rural communities benefit from more distance between homes, easing six-foot separation, as well as increased space within homes in which one may stock up on canned goods and toilet paper. The multifamily buildings that characterize urban areas now present unique anxieties, as they have more communal necessities, such as elevators and resident meetings, which bring new health concerns.

This is more than just an idea. Professor Daniel Murphy built a model that conceptualizes these suburban/urban tradeoffs, focusing on how different areas fulfill these essential daily functions.
‘Home’ Versus ‘Market’ Production

For example, while suburban houses are typically equipped with their own laundry machines, urban areas feature communal laundromats. Urbanites rely on taxis and public transportation, whereas more people within suburbs depend on their own cars. Those in suburbs tend to cook more at home, but limited urban space encourages one to store less food, rely on smaller, expensive convenience stores, and order at more restaurants. As a matter of fact, a survey finds new British city apartments are shrinking, as this trend toward ordering out requires less space devoted to the kitchen. Market production is a direct response to space constraints; increased population density makes each unit of land more valuable, and market production allows for more efficient use of land. For example, when relying on taxis or public transportation, each individual does not have to pay for their own space to park their car(s). Additionally, market production is more efficient because it allows the collective to share production factors costs. Instead of each person paying for their own car, gas and the accompanying maintenance fees, each taxi fare acts to subsidize this cost.

Furthermore, increased population density is correlated with an increase in the price of land. These land prices may be rising for a number of reasons, including proximity to the work or amenities found within the hub of a central business district. However, Murphy’s theory suggests that efficient use of land in dense areas through this market-based sharing is also a contributing factor to increasing land prices. Although land prices increase, market production does save time. With the cumulative hours that one would have had to spend changing oil or checking tire pressure on their own vehicle, those who live in cities can choose to work more and are therefore able to pay for this increased market-based urban expenditure.

Model Results
Murphy’s model supports his theory, finding that residents of dense areas spend more money on local services, home-produce less, pay higher land prices — and work more. The model found a strong dependence of work hours on city density, with people working 2 additional hours per week in high-density areas and 3.6 additional hours per week in highest-density areas. In controlling for productivity, occupation and proximity to work, the model essentially compares individuals who are identical in their preferences and only differ in terms of neighborhood density.

As a result, it finds that the correlation between working hours and city density is not just illustrating that those who work in intensive industries tend to prefer to live in these high-amenity areas with higher land prices. Instead, across industries, Murphy finds that increased market production within high-density areas allows for the ability to work more hours, offsetting the increased cost of paying for essential services on the market.

Similar results are found when Murphy limited the sample to only single individuals with no kids, removing any element of family consideration (e.g., school quality) on one’s home decisions. Although families do have an effect on where people choose to live, after the removal of that variable there is still a significant link between increasing time spent working and geography.

Murphy also finds evidence that suggests market production is a factor that contributes to high land prices. Rent residuals increase as population density increases, which is a pattern that holds, even when accounting for relevant factors such as location benefits, demographics, wage and occupation. There is a chance that there is another conclusion that may be drawn, such as an unobserved preference hardworking employees have for laundromats and other market production services. Still, there is a clear link between high conditional labor supply and increased land prices in dense neighborhoods, which lends considerable credence to Murphy’s theory.

This paper is the first to explicitly model the density-dependent tradeoff between home and market production and its implications for market prices and quantities. In addition, it clarifies the divide between city and suburban patterns of consumption, which has recently been made evident through widespread closures.

As the city’s laundromats and neighborhood convenience stores remain open as essential businesses, market production necessitates more frequently leaving one’s home in an increased cost to health and safety, for at least the near future. However, the long-term balance between cost and efficiency will remain, even as cities recover and the tradeoff between higher incomes and higher market production prices continues.

This article was developed with the support of Darden’s Institute for Business in Society, at which Salem Zelalem is a research assistant.

Tweets by @forbesindia
How cyclone Nisarga got its name
Photo of the Day: A disabled man grapples with the impending Cyclone Nisarga