The Binance CEO shared this decision was taken due to the client being "unreasonable". 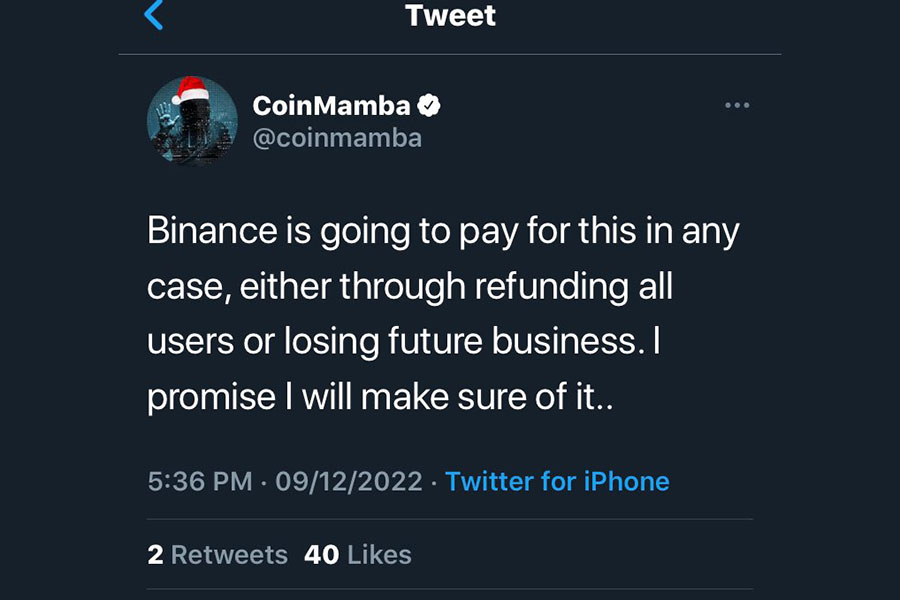 Following a user's complaint over the exchange's handling of an alleged fund theft, Binance, one of the best known crypto exchanges across the world, terminated their trading account on December 9. Changpeng "CZ" Zhao, the CEO of Binance, stated that the company does not wish to serve "unreasonable" customers.On December 8, a user going by the handle CoinMamba on Twitter began lamenting the missing money, alleging that a stolen API key connected to the crypto trading company 3Commas had been utilised "to make trades on low cap coins to push up the price to make profit." In a string of tweets, the trader complains that Binance could not offer him the necessary assistance.On December 9, the CEO of Binance also posted a clarification on Twitter. As the customer repeatedly complained on the social media site, Zhao confirmed that it was considering placing the customer's account "in off-boarding (withdrawal only) mode," i.e., on hold in a later tweet, adding further "we don’t want to service people who are unreasonable." The tweet was removed later, but a screenshot of it is still in circulation. The user then had three days to make a withdrawal before their account was closed.The user tweets claim that 3Commas rejected any attempt to abuse its protocols or databases and that, as a result, it is not liable for the stolen API keys. “On the basis of the information we have today, we have found that no encryption protocols have been found to be compromised and no breaches of 3Commas’ account security databases have occurred,” according to 3Commas support.The purported API hacker was brought up by other Twitter users, who urged Binance to halt withdrawals and look into the problem. The CEO of Binance acknowledged on November 13 that at least three individuals experienced unforeseen account activity after sharing their API Key with the third-party services Skyrex and 3Commas. After that, Changpeng Zhao advised users to destroy associated API keys. Meanwhile, Coinmamba asserts that he has been a customer of Binance for more than five years and continues to have open futures positions on the exchange.Shashank is the founder of yMedia. He ventured into crypto in 2013 and is an ETH maximalist. Twitter: @bhardwajshash

Tweets by @forbesindia
Kusha Kapila: Influencer next door
SBF plans to start a new venture, confirms his presence as a witness