Kusha Kapila is riding the popularity wave on social media with her hilarious and relatable content. She's now making her presence felt on the big screen and streaming platforms with multiple roles 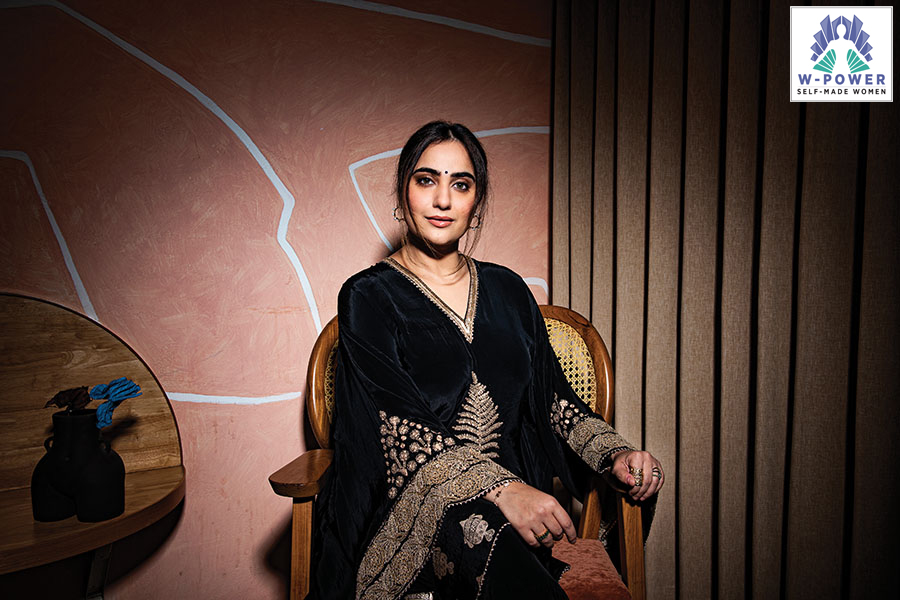 Kusha Kapila is amused every time her name is butchered by those who fail to pronounce it correctly. It gives me immense joy, she says. And yet, it is her name that has made her an internet sensation and given perks such as free entry for a gig to seven of her friends in Goa recently. “Someone had watched my content… the tickets cost ₹5,000 to ₹10,000 per person,” she laughs aloud. “Honestly, if I can brag in front of my friends… that is my greatest achievement. I just want to be a hero in front of my childhood friends because they think I am useless,” she continues, self-deprecatingly.

A former junior fashion editor and entertainment writer at Times Internet’s iDiva, Kapila is today a digital content creator and influencer with 2.8 million followers on Instagram. Her funny takes on relatable people and scenarios have helped her ride the popularity wave on social media. And she is enjoying her moment in the sun by latching on to other creative opportunities: Acting in films and web series, hosting shows and appearing as a judge on them.

It was destiny that took the 33-year-old from Delhi from behind the laptop to front of the camera. At iDiva, it emerged that people were not reading, but watching content. As a result, all the writers were encouraged to make videos. Though sceptical initially, Kapila took to it like a fish to water. “It was exciting and I saw it as an extension of our work… also, it meant being in front of the camera—I seem to like that,” she says.

For four to five months, the team made a bunch of videos, a mix of hits and misses. But a series called ‘South Delhi girls’ went viral overnight. “It became a WhatsApp forward and people began recognising us. It was our first encounter with viral content and what it means for our career,” recalls Kapila, who has a bachelor’s in leather design from the National Institute of Fashion Technology, and had previously worked at ecommerce websites and advertising agencies. 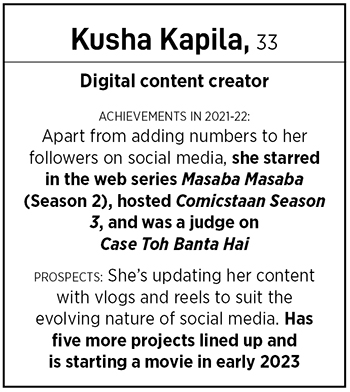 In 2019, Kapila quit iDiva and decided to go solo. Though the idea of leaving a regular-paying job was scary, she says she had bagged her first gig with a brand, an association with a Delhi exhibition, apart from three to four brand deals, and was banking on her savings. “I saw a lot of monetisation opportunities. I could see the prospects of what I could possibly make,” she says.

A performer since her school and college days—she was into dramatics and even left a literature course because she would reach college only in the afternoons for theatre rehearsals there—she began building characters and sketches. “I used Instagram as a canvas for years of in-built, pent-up creativity that was probably not unleashed or remained untapped,” says Kapila, who became popular with characters like Billi Maasi, Zulmi Aunty, Indian Mom and Monday Aunty, among others.

Santu Misra, who ‘discovered’ Kapila’s talent when the word ‘influencer’ did not mean what it does today, says she is passionate about her work. “Kusha is extremely hardworking. That girl is gifted. You put her in front of the camera, and she shines. And that’s what happened… she just took off. It was meant to be,” says Misra, who was national creative director at iDiva, and is now co-founder and creative director at Fetch India, a New Delhi-based creative, influencer and PR agency of which Kapila is one of the first talents.

Kapila has now made the shift from mobile to the big screen. In 2020, she starred in Ghost Stories, in a segment directed by Karan Johar. She is now awaiting the release of her next—Sukhee with actor Shilpa Shetty. The content creator also featured in the web series Masaba Masaba (Season 2) on Netflix in 2022 and considers it an honour to get mentions in reviews. She hosted Comicstaan Season 3 on Amazon Prime Video and is a judge on Case Toh Banta Hai, a comedy show involving celebrities. “I want to extend to doing different things. How long can you do the same thing and profit of it?” she asks.

Describing herself as someone who likes to learn, she says she is constantly updating her content. “Platforms are never going to get old, they are going to latch on to the young crowd,” says Kapila. “You need to understand the new language of the internet, and what’s working and what’s not.”

Popularity, she acknowledges, is a double-edged sword, but says if one is profiting by being in the public space, they cannot accept just one aspect of it. “You need to equip yourself with a better support system, and tools to fight the negativity, speculation, opinions,” says Kapila. “The sooner you accept it, the thicker your skin becomes. The more immune you are to it.”

Misra, who considers Kapila one of his best friends—so much so that they complete each other’s sentences—believes she should take constructive feedback from people. “Kusha does not take anything for granted though. In fact, she would like to work 365 days a year,” he says.

People who are oblivious to how hilarious they are, are my inspiration, she says. “I love talking to people. The best thing I like to do is have conversations,” says Kapila.

Life of an internet celebrity can be unpredictable. Kapila says more important than having a backup plan is keeping your investments in place. “That’s one thing we can empower ourselves with,” she says. “Having multiple sources of income always works.”

For someone who hates to take a break, Kapila is trying to figure out her New Year plan. “I worked hard in 2022. I want to celebrate and unwind.”

Tweets by @forbesindia
Photo of the day: A thrilling knock
Trader's account is suspended by Binance following Twitter complaints