Having worked in the field for 23 years, Kainaz Karmakar, chief creative officer of Ogilvy India, has won 40 accolades for her out-of-the-box, brave and innovative approach to advertising 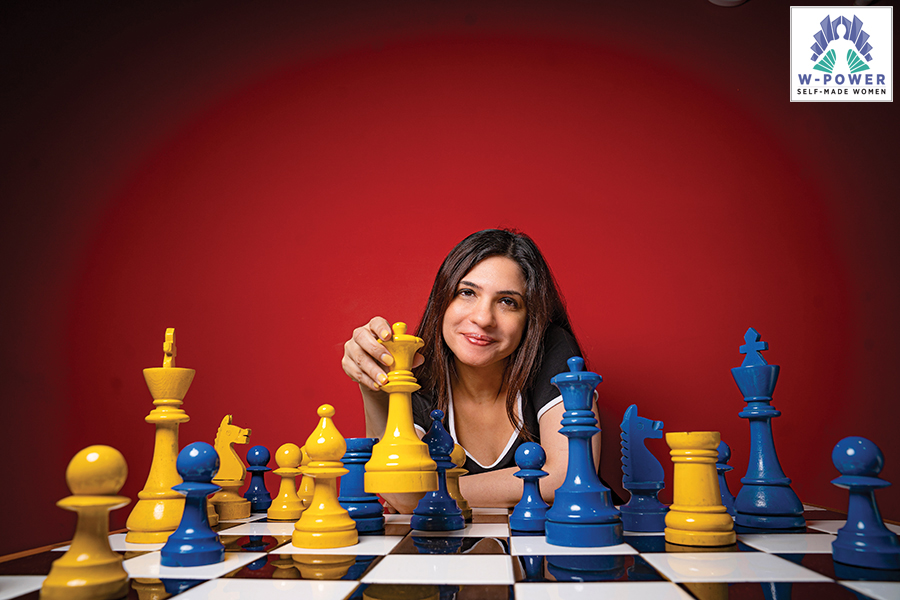 Right out of college in 1999, having graduated in psychology, Kainaz Karmakar was a stranger to advertising. “I stumbled upon advertising,” says the chief creative officer (CCO) of Ogilvy India. When plans to study abroad didn’t materialise, she was exploring options. “Back then, there were broadly two aspects to advertising, art direction and copywriting, and while I loved writing, I didn’t have the knowhow of the craft,” she adds. “It’s been 23 years since my first stint, and I’ve never wanted to do anything else.”

Karmakar today is an influential voice in advertising. She has been the driving force behind some of the most powerful and successful advertising campaigns in India. Known for her out-of-the-box, brave and innovative approach to a brand’s identity, Karmakar believes communication holds the power for positive change. “Effective communication through advertising can be a catalyst to change,” she says.

She is known for her work around social issues. Her campaign for Savlon Healthy Hands Chalk Sticks won Asia’s first Grand Prix for Creative Effectiveness at Cannes Lions and was featured as the ‘Iconic Work of the Decade’. The Beauty Tips by Reshma advertisement that campaigned for a ban on the open sale of acid won the first Glass Lion for Ogilvy India. She has won over 40 awards that include the prestigious Cannes Golds, One Show Gold, D&AD Awards, D&AD Impact Awards, Spikes, and AMES. 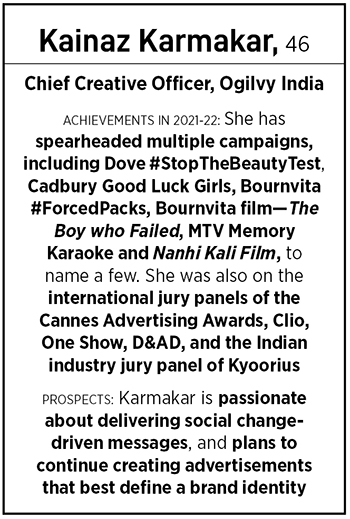 One of her recent successes is Bournvita’s forced pack campaign that talks about ethical parenting. She has won multiple accolades for her work on brands like ITC, Mondelēz, CEAT tyres and Brooke Bond Red Label, Unilever, Fiat, Bajaj, McDonald’s, Heinz and Cadbury, among others.

With a coffee mug in her hand and a constant smile on her face, Karmakar reminisces about her entry into advertising. She started her journey with FCB Ulka in 1999 from where she jumped ship to Leo Burnett in 2000. “That’s where I met Agnello Dias who has been my biggest teacher. He taught me the craft of advertising,” she says. In 2006, she moved to JWT where she met Harshad Rajadhyaksha and worked there until early 2010, when she shifted to Ogilvy with Rajadhyaksha. “Harshad and I were told that outsiders can’t make it big in Ogilvy. People said that to be successful and rise the ranks, one has to be born and bred in Ogilvy.” But this didn’t hold them back. “Harshad and I approached ideas with complete innocence and dedication, which worked in our favour,” she adds. Today, both Karmakar and Rajadhyaksha are the CCO of Ogilvy India.

Rajadhyaksha has worked with Karmakar for 21 years and says she is passionate and an inspiring leader. “A client’s problem becomes her personal mission to solve. She’s calm-headed, so much so that she’ll approach even a project’s fifth round of rework with absolute commitment and dedication. She is always on the lookout to break records. For Kainaz, work is her first love,” he says. “The long and cherished partnership with her inspires me to give my best.”

“Ogilvy has been the best thing that has happened to me. Being in the presence of Piyush Pandey, Abhijit Avasthi and Rajiv Rao was a trial by fire but also a privilege. They have helped me shape my approach to advertising,” Karmakar says. On the downside, Karmakar says that at times, even today, a room full of men would take a minute to take a woman’s perspective seriously. “There have been instances where a client has taken two-three meetings before they could start looking at me and talking to me as compared to my male counterparts,” she says, adding that this has never held her back from voicing her opinion.

Also read: Why taking gender out of the equation is so difficult

The culture of placing work above all else is what she admires the most about Ogilvy. “I love thinking about ideas, and my job is to do that every single day. In retrospect, I don’t think I would have wanted to do anything other than advertising,” she says. “It is a great field to be in if you’re okay with no work-life balance,” Karmakar laughs and signs off to hop into another meeting.

Tweets by @forbesindia
Jacinta Kerketta: Becoming the voice of indigenous communities
US lawmakers introduce a bill for EPA to investigate energy consumption by crypto mining