Anju Srivastava wants people to realise that doing business thoughtfully is the future. And with Wingreens Farms, she is leading by example by empowering farmers and their families 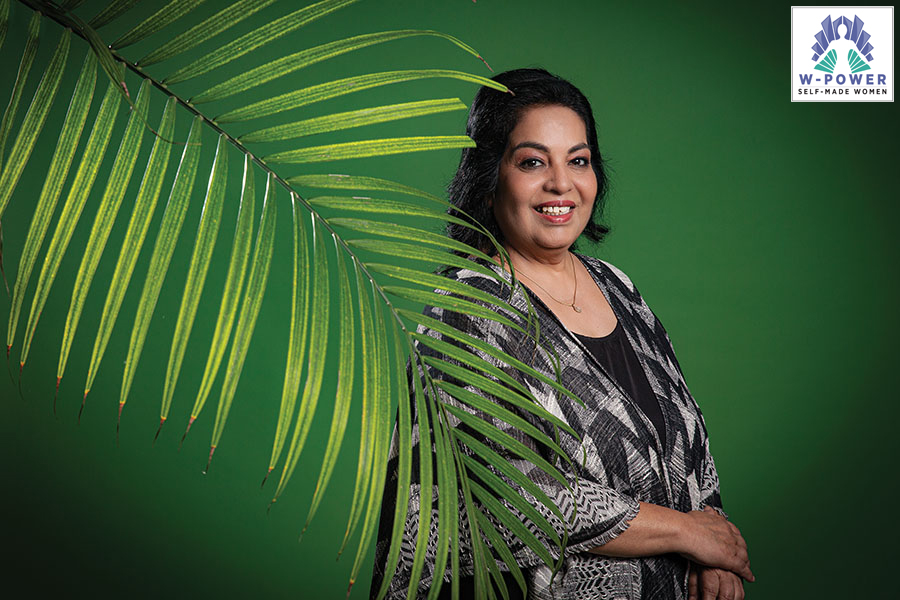 At heart, Anju Srivastava is a conscious capitalist. That’s precisely why, when she began her entrepreneurial journey, one of the first things she focussed on was the welfare of farmers and women, who were going to help her in her business. “How can you be happy when everything around you is not as happy?” Srivastava says. “So, honestly, it’s not about being a philanthropist or being compassionate. It’s just the way I can be happy.”

Srivastava is founder and CEO of Wingreens Farms, a Gurugram-headquartered maker of chips, dips, sauces and healthy snacks. In recent times, it has brought under its fold popular brands such as Raw Pressery, a Mumbai-based maker of cold-pressed juices, shakes and milk, Coimbatore-based cereal maker Monsoon Harvest, and Bengaluru-based snacks maker Postcard Snacks.

Wingreens started out as a pilot project in 2012 when Srivastava returned to India after a stint in the US. An advertising professional, she first began by selling potted herb plants, a practice common in the US. However, that was a business that was hard to scale, and soon, Srivastava decided to use fresh herbs to make sauces and dips. “The potted herbs were not a scalable business,” she says. “We had lots of basil that season and so we started making basil pesto.” That was a hit in stores, and soon, Srivastava knew she had a business at hand. 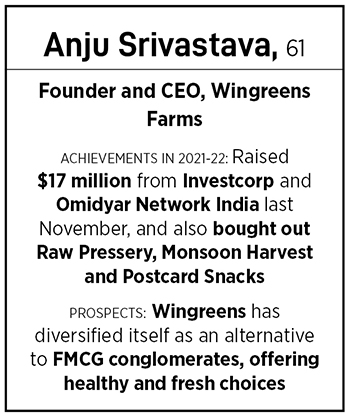 The company doesn’t own any land for its farm cultivation. Wingreens grows its herbs for its dips and sauces on 15 acres of land that they have rented. “It’s still a pilot project,” Srivastava says. “But now, we can extend it to any extent that we wish.”

In the process, however, one of the key focuses for Srivastava while building Wingreens was the welfare of farmers and their families. “When farmers have land that is worth so much, how is it that they do not have liquidity?” Srivastava asks. “Secondly, understanding that the crops that they grow are not giving them the kind of returns was also important.”

To convince them, though, Srivastava first needed to understand what crops could work and whether the soil and weather patterns were conducive to growing them. Then, to de-risk the farmer, who had been farming a certain kind of crop for many years, Srivastava started out by offering them a rental for the land on which the cultivation was to happen. Then, she realised there was massive potential in employing the kin of the farmers, especially the women and children.

“Everyone is paid to do a job,” Srivastava says. “But the farmer is not. The fact that it’s his land means he better do it himself, and if it doesn’t work out, the poverty just extends. It’s illogical economics that continues to extend into more and more people’s lives.”

Srivastava then began by offering a wage to the family members for the work they were doing. “I remember we paid anywhere between ₹9,000 and ₹12,000,” Srivastava says. “Now the farm manager is earning around ₹35,000 and what’s also interesting is the fact that they’re learning.”

In 2015, Sequoia Capital made a seed investment in the company and that’s when Srivastava says the real start began for Wingreens. Over the past few years, the company has raised nearly $50 million across various rounds of funding, according to Crunchbase, a database of startup funding. Then, over the past two years, the company also acquired Raw Pressery, Monsoon Harvest, and PostCard, strengthening itself into an FMCG company.

India’s dips and spread market is worth around ₹3,500 crore and is expected to almost double by 2026, according to Praxis Global Alliance. “One of their hallmarks has been quality,” says N Chandramouli, brand expert and CEO of market research firm TRA Research. “They have a good range of products; a good shelf life and they have held up well in this crowded market. But now, as they join the big boys’ club, it is important that their quality does not suffer as they go after volumes.”.

Srivastava is aware of what she wants for the company. “For us, we have a few principles we stick with,” she says. “The brand should be close to the source; it is also important that our products are sourced from farms so that one day we can grow them or work with farmers to grow them. The product should also be fresh and healthy.”

From an advertiser to an entrepreneur, it has been a long journey, and Srivastava is only getting started. “I just want to make sure that people realise that doing business more thoughtfully is the future,” Srivastava says.