Forbes India's W-Power does consider conventional parameters of measuring success—wealth and valuation, power and position, and value-creation and performance—however, at the heart of the list is the self-made essence of these women. They're not dynasts or inheritors, but individuals who have imagined their own ideas, their own paths, their own destinies 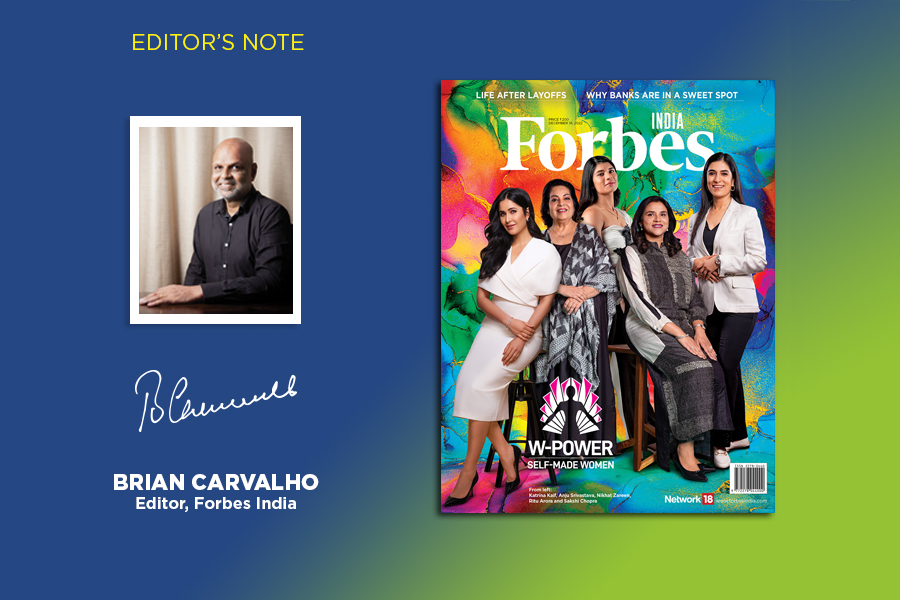 The stats are pervasive: Of the 2,668 billionaires in the world, just 327 were women (source: Forbes’s The World’s Billionaires 2022 list). The Forbes list of richest Indians 2022 had just five self-made women on it. And, of the 100 unicorns in India, as of May, only 15 percent had at least one female founder (Inc42).

The silver lining may be that it could only get better. And, on the startup front, the inequity may just be reducing.  Some 16 months ago, as an EMA Partners diversity study had pointed out, India had just five unicorn founders who were women out of 136 founders of 56 unicorns.

Anecdotally, the number of women founders emerging in startup coverage—in Forbes India, for sure—is on the up. Programmes like Nasscom’s Tech.WE will go some way in creating a robust platform of women entrepreneurs with access to networks, learning and resources required to scale and grow.

Till the gap is narrowed, lists that celebrate women achievers will matter. Where Forbes India’s W-Power stands out is that although it does consider conventional parameters of measuring success—wealth and valuation, power and position, and value-creation and performance—at the heart of the list is the self-made essence of these women. They’re not dynasts or inheritors, but individuals who have imagined their own ideas, their own paths, their own destinies.

Not often do women from the second tier of Indian cities go on to head marquee global companies. The journey of Kolhapur-born and educated Leena Nair is a unique one: After finishing school in the south-western town of Maharashtra, Nair moved to nearby Sangli for a degree in electronics and telecommunication engineering; then to the Xavier School of Management in Jamshedpur for an MBA; from there to multinational Hindustan Unilever in Mumbai where, over 15 years, she rose from management trainee to the first woman executive director, and also the youngest.

To know more about the lady who went on to become chief HR officer out of London of a consumer goods conglomerate that operates in almost 200 countries and who, more recently, took charge as global CEO of French luxury perfume house Chanel, Varsha Meghani’s profile on Nair is a must read.

Nair may be the prominent name on the 2022 W-Power self-made list—researched and put together by Meghani—but every other woman featured in this package has a story to tell: Of determination to surmount the odds and staying the course.

If Nair seems the quintessential ‘outsider’, that is precisely why she has made it to the list. Outsiders bring in new perspectives, fresh thinking in what is often a largely cosy men’s club.

Consider, for instance, Sakshi Chopra, who, early on, grew up being the new kid on the block as her father got transferred to a new city every two or three years. It was no different for Chopra, now a managing director at Sequoia India, when she took the plunge into venture capital. As Chopra recounts to Rajiv Singh, promoters she met in her early days at Sequoia would often give her short shrift, preferring to engage with male colleagues. For more on the how “patience and perseverance” helped the outsider become the go-to for capital, don’t miss ‘Warrior Queen’.