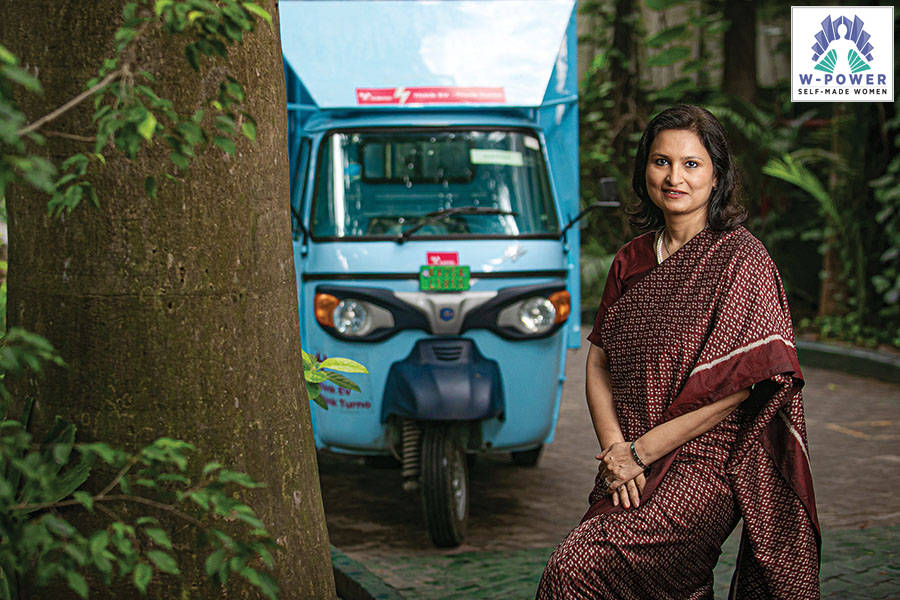 Anjali Bansal has, for years, been asking young people: ‘What are you most excited about? And what are you most worried about?’ For the first, they talk about various things. For the second, until about two to three years ago, “they would say, perhaps, worried about jobs and so on. Then it started shifting to, I’m worried about the environment. That to me was a personal ‘aha!’ moment,” says the founding partner of climate tech venture capital (VC) fund Avaana Capital.

There were a couple of other moments like that, one of them being a side effect of Covid—“the sky was blue and I saw colour in the sea off the coast of Mumbai, which in the 20 years of living here I’ve never seen. So it just goes to show that there is a better world that can be lived in”. And another being her son choosing a college based on the fact that it offered a climate course.

Though Avaana Capital, founded in 2018, was always focussed on sustainability and inclusion, over the last few years, the team has further sharpened the focus to working on climate solutions. “Seventy percent of our portfolio has been in sustainability. We have now just chosen to define it,” says Bansal, adding that for Avaana, climate means three things. “These three areas constitute 90 percent of emissions in India. Energy transition, which includes everything from energy access to renewables, to land and resources for land, air, water waste. The second is mobility and supply chain. And the third is resilient agriculture. So mitigation, adaptation, and resilience.” 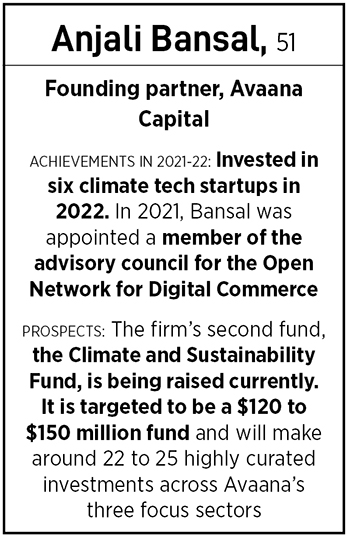 The difference with climate tech investing is that there is a strong, innovation-driven technology element, points out Ramraj Pai, chief executive officer, Impact Investors Council, a national industry body to strengthen Indian impact investing. He adds that in the last couple of years, there has been increased interest in the impact VC space, and there are a few funds that are making innovation-driven investments in very new technologies.

Avaana has so far invested in about 20 startups, including Eeki Foods and Terra.do in 2022. The fund invests in early-stage, pre-Series A companies that are not just solving large-scale problems, but are also on a clear path to commercialisation and profitability. “So big problems, big market, great founders, where technology or innovation is the moat and capital is only an enabler,” says Bansal, an engineer, who studied policy and business and finance at Columbia University, and then joined McKinsey as a strategy consultant. Later, she was global partner and MD with TPG Private Equity, but all through her journey she has always had, as she puts it, a two-track approach, “one is your day job and one is what else can you do, and to contribute to that”.

While the latter has included being chair of the India board of Women’s World Banking, she was also tapped by the government to take over as the first external chair of Dena Bank, to steer the stressed bank’s resolution. More recently, she has been working with the advisory council for the Open Network for Digital Commerce, the world’s first open access infrastructure for digital commerce. Along the way, she has served on several company boards, though now, she says, she “serves on boards that are completely mission-aligned with Avaana”. Case in point, Tata Power, Nestlé and Piramal Enterprises.

Bansal’s networks everywhere, from policy to academia, translate into a team with deep expertise and experience in the sectors in which they operate. “So understanding whether something is commercially scalable is two phone calls away,” says Riddhi Vora, who works with the investment team at Avaana.

Bansal has found female partners in Shruti Srivastava, who manages investments at Avaana, and Swapna Gupta, partner at the Avaana Climate and Sustainability Fund. But, Bansal says, if there’s one thing that male founders do differently, “it is that they find two of their classmates, batchmates, whatever, and have a three-member founding team, [while] women tend to start alone, partly because they don’t have the network”. A leaky pipeline means women often drop out of the work environment. So her advice to women entrepreneurs? “Find your co-founders, start with the team and build. Dream big and find your tribe early.”