Ashwini Deshpande, professor of economics at Ashoka University, studies the economics of discrimination—how do race, caste and gender affect economic outcomes. And unlike most economists, she doesn't limit her work to academia, but puts it into practice 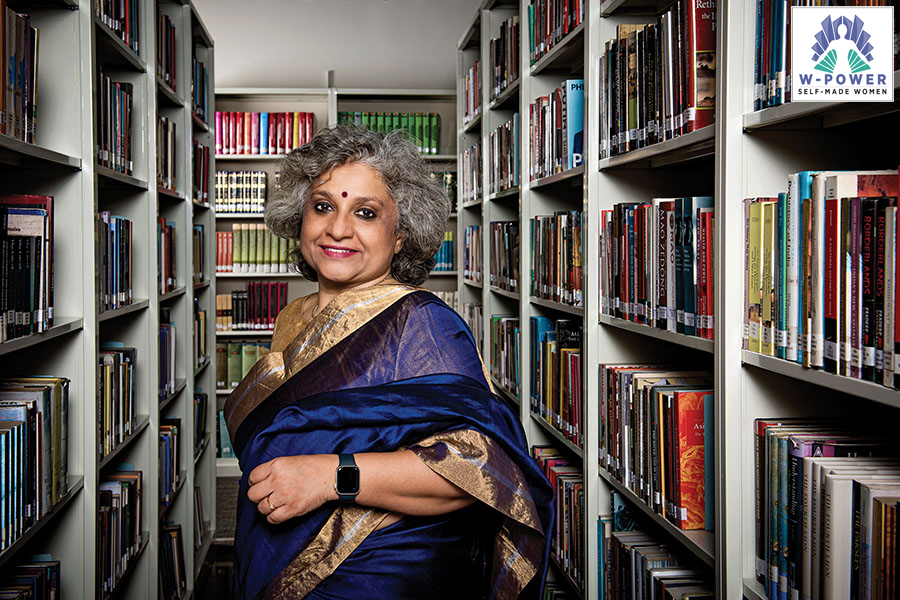 Unlike most economists, Ashwini Deshpande isn’t serious or staid. Instead, she’s cheery and bright-eyed as she appears on a Zoom screen, her crop of silver hair loosely pinned. She’s on a mid-term break from Ashok University where she serves as professor of economics.

She studies the economics of discrimination, that is, how do race, caste and gender affect economic outcomes. And unlike most economists, she doesn’t limit her work to academia, but puts it into practice.

Deshpande didn’t start out looking at caste and gender. “That was reserved for sociologists at the time,” she chuckles. Her PhD under Dr Kaushik Basu, the celebrated economist at Delhi University, looked at the international debt crisis of the 1980s. It was only when she travelled to the US thereafter for a post-doctoral stint that she was introduced to the economics of discrimination. She hasn’t looked back since.

Deshpande cites her aaji, maternal grandmother, as an early influence. Her husband died when she was just 45. They had four young children and aaji, recalls Deshpande, was determined to provide for them. Uneducated but-skilled, she took to sewing and eventually started tailoring classes to earn money. “My aaji always told me, ‘Never lose sight of being economically independent’,” says Deshpande. 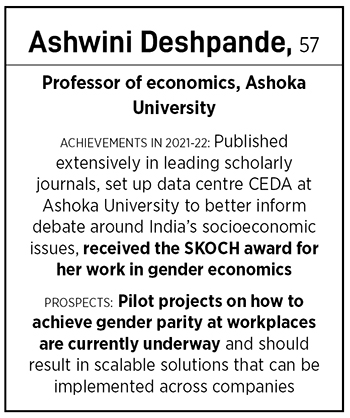 Her aaji’s story reflects the issues India still grapples with. Women are still largely responsible for domestic chores. This “reproductive labour”, as economists call it, includes not just birthing and rearing children, but also cooking, cleaning, washing, and caring for the elderly. The burden of it prevents women from taking part in paid work outside their homes, making men the sole breadwinners of families. “These are two inequalities that mirror each other,” says Deshpande.

She argues against the long-accepted belief that socio-cultural norms have led to the decline in female labour force participation in India over the last 20 years. “The norm that women are responsible for household chores is a factor in explaining India’s low female labour force participation rate [around 19 percent, compared to 56 percent and 61 percent in the US and China respectively], but it doesn’t explain the decline over the last two decades,” she says.

“It’s not as though in the last 20 years women’s responsibility of domestic chores has dramatically increased and now they don’t have time to work outside,” she continues. What then is responsible for the drop?

Also read: Women in the workforce: It's time to act bold

Structural changes to India’s economy, she says, as it transitions from an agrarian to a services-led one. Agriculture has been and continues to be the largest employer of people, particularly women, but the numbers are falling. A corresponding increase in jobs on the manufacturing and services side has not occurred. “If there are fewer jobs available, men will take them because of the norm that women are responsible for home chores,” she says. But India massively loses out on its GDP when it leaves its women behind.

“It is not just her research; Ashwini stands out as a role model for all Indians and especially women. She did all her studies, including her PhD, in India. The way Ashwini has broken into the global research scene is exemplary,” notes Basu over an email response.

Deshpande recently founded and runs Centre for Economic Data and Analysis (CEDA) at Ashoka University. The platform serves as a one-stop hub for all socio-economic data related to India that can be accessed by academics and students, journalists, and policymakers.

Say, someone wants to understand how female labour force participation correlates with the maternal mortality rate. CEDA can match these differing data sets, plot them into a bar chart or heat map or any other kind of visualisation, and help the user understand the links. “This new data centre has huge potential for advancing research in India,” adds Basu.

Also read: Why taking gender out of the equation is so difficult

Recent global shocks, including the coronavirus pandemic, have pushed gender equality further out of reach. So how can we get back on track?

By making changes at the very top, says Deshpande. She has received a grant from the Bill and Melinda Gates Foundation to understand the ways in which large corporates can be nudged to adopt more gender equal norms. Pilots are underway.

“The reason for focusing on the formal corporate sector [which is a small sliver of India’s working population] is that we believe, if they adopt more gender equal policies, it will have a signalling effect down the chain,” she says.

So will men and women ever work as equals? Deshpande flashes a brilliant smile: “Men did step up during Covid-19 when domestic helpers weren’t around. Norms did change and can change.”

Tweets by @forbesindia
Gold vs Equity: Which is a better hedge against global recession?
Devleena Bhattacharjee and Nandhini Karthikeyan: Occupying tech-driven aquaculture space with Numer8