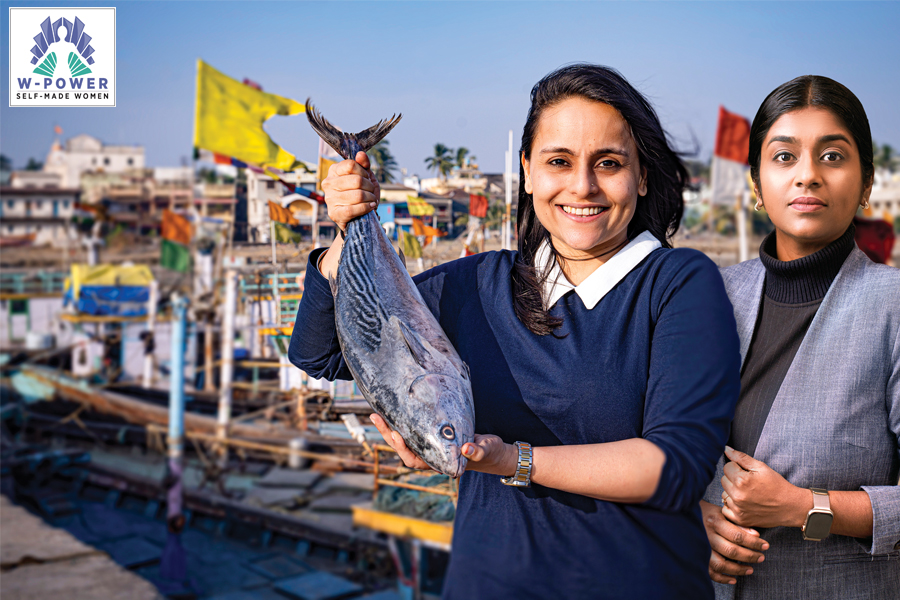 Devleena Bhattacharjee got interested in the way data science could help fishing communities when she was working on a project as part of the European Space Agency’s (ESA) Copernicus Master’s programme in December 2018.

Earlier that year she had started data analytics firm Numer8 which offered data science analytics to companies ranging from media firms to restaurants to help them understand customer behaviour patterns, their spends etc.

Bhattacharjee, who had studied MCA from Bangalore University, always wanted to use her skills to deep dive into business challenges and solve real-world issues through data analysis. When, during the ESA project she saw the conditions of fishing communities and the havoc climate change had been causing, she pivoted Numer8’s area of focus to fishing communities. 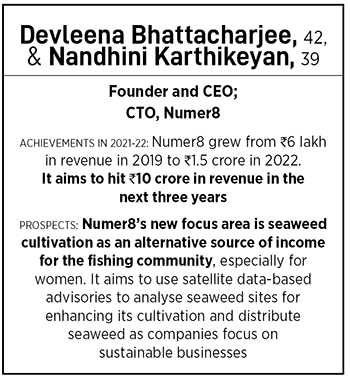 Bhattacharjee started Numer8 as a one-person firm with her own investment and later built a team of data scientists, geographic information system (GIS) and marine experts. Around the same time, Bhattacharjee met Nandhini Karthikeyan during an online course on machine learning from Jed-I university. Karthikeyan joined the Numer8 team in May 2018 and was later appointed CTO in April 2020.

Numer8’s app OFish, launched in 2019, uses satellite image data analysis to indicate concentrations of fish near a user’s port, helping fishermen to cut down on time and fuel expenses. OFish, targeted at fishermen, offers three main features: Advisory for fishermen, market linkage and insurance/finance. It has subscription rates ranging from ₹700 to ₹2,200 and the app has 7,000 active users currently.

Based on satellite data images and analysis, the advisory feature in OFish includes suggestions to the user on potential fishing zones, algae bloom, ocean currents, tidal action, wave action, weather advisory and route tracking. “It results in lower carbon emissions and above all, lower operational cost for fishermen,” Karthikeyan says.

The market linkages create a marketplace for the fishermen to sell their fish to online distributors. “The OFish app also has a backward market linkage feature, meaning if a fisherman has a certain requirement like nets or cold storage facility, we help them procure and deliver it to them,” Bhattacharjee adds.

Lastly, OFish also provides the data of the fishing community to insurance companies for finance and loans. “This has been a difficult area for us, but we have been able to get loan sanctions and funds for a few fishermen groups,” Bhattacharjee says.

Numer8 had a turnover of ₹6 lakh in 2018 which has gone up to ₹1.5 crore in 2022 as it has expanded the business and supply partners, tying up with direct-to-consumer (D2C) fresh fish and meat delivery companies like Licious, Fresh-To-Home and Fresca Fish. It is aiming for a revenue of `10 crore in the next three years.

Vineet Rai, founder, Aavishkaar Group, says, “We have been seeing some serious activity in the tech-driven aquaculture space over the last three to four years. The product, due to its unique challenges of high unit price, sensitivity to time and remoteness, can be converted into a significant business opportunity with technology and data. Companies like Numer8 are addressing this burgeoning market at a rapid pace and we believe more capital would move into the space. One may hear about our investments in this space soon too.”

Numer8 is currently bootstrapped and has been operating with the help of grants and financial assistance from the United Nations WFP and the World Bank, among others.

This year, Numer8 has also diversified into seaweed cultivation, with its partner ClimaCrew, looking at it as an alternative source of livelihood for the fishing community. Processed dry seaweed is used in sectors like food, feed, pharma, fuel, fertiliser and fibre (instead of plastics). It has partnered with NGO Mahila Arthik Vikas Mahamandal (MAVIM) in Maharashtra to identity skilled fishermen, especially women, to cultivate seaweed.