The importance of courage

Courage determines whether a leader will put leadership skills or toolkits to effective use. It is courage that is absolutely fundamental to solving problems, innovating, pursuing opportunities and safeguarding the welfare of others 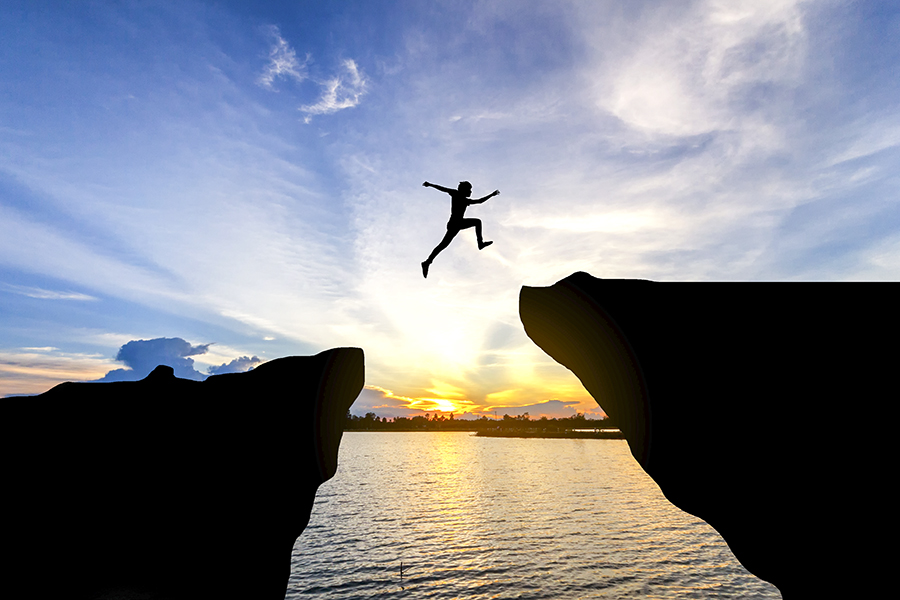 Choosing Courage sets out a road map for building the skill of courage and increasing the chances of having maximum impact in doing so.
Image: Shutterstock

Stuart Scott was the first Black television presenter to anchor ESPN’s flagship sports program, SportsCenter. Remembered for his use of slang, clever catchphrases and references to Black culture and music, Scott is also credited for effectively changing the language America used to talk about sports.

But not everyone was a fan. In the early 2000s, he faced a backlash from certain parts of the media, the public and even senior executives at ESPN. Tone the style down, said one boss, or face the consequences. Scott’s response was creative, brilliant and gutsy. He chose to go on air and publicly congratulate his employers for supporting underrepresented aspects of American culture — communities that had not hitherto been championed on TV. This act saved his career while simultaneously advancing Black culture in the U.S.

A decade later, a medical student, Chris, took a decision that most likely saved a life. When a suicidal patient arrived at the emergency room, Chris pushed the intimidating supervising psychiatrist to order a simple diagnostic. The results revealed a vascular disease to be the root of the problem, and the patient was sent to surgery instead of the psych ward.

Elsewhere, marketing executive Jackie faced a dilemma. Her organization’s president was opposed to an ambitious sales campaign that she wanted to launch. If it works, he told her, you can keep your job. If not, she would need to look elsewhere. Jackie went ahead with the campaign, which turned out to be the most successful in her organization’s history. She kept her job, though she received little in terms of recognition or thanks.

What do Stuart Scott, Chris and Jackie have in common?

They all faced a choice: to pursue … or not … an action that could lead to recrimination from their superiors. And each of them chose to step up when most others might not. They chose to act courageously.

In the book, Detert advances a novel idea. Courage, he says, is the lynchpin of leadership. It is courage that determines whether a leader will put leadership skills or toolkits to effective use. It is courage that is absolutely fundamental to solving problems, innovating, pursuing opportunities and safeguarding the welfare of others. And contrary to our common understanding, courage is not the province or responsibility of the few; courage is a skill that can be learned and developed.

“As a society, we’ve largely accepted the notion that courageous actions are not the norm,” writes Detert. “They happen only when you find extraordinary people in extraordinary situations. This book presents a challenge to that idea. I believe that courage isn’t just about the spectacular, rare acts that get you labeled Time’s Person of the Year. The need for courageous actions falls within the responsibility of every effective leader — and competent courage comes from the choices you make to step up and speak up, and to learn and repeatedly practice specific skills, just like any competence in any domain.”

Choosing Courage: The Everyday Guide to Being Brave at Work sets out the argument for courage in leadership, warns of the risks of failing to be courageous, explores how courage manifests in the workplace, and examines the strategies, tactics and tools that leaders can deploy to develop the courage competence.

The book distills everything Detert has learned, he says, in his years of researching organizational behavior, and is fleshed out by scores of personal stories and case studies modeling the kinds of behaviors that are “desperately needed if individuals and businesses are to learn, be healthy and thrive.”

When leaders fail to act courageously, he warns, they risk allowing things like discrimination and abuse to foment, as in the well-documented cases of Wells Fargo or Volkswagen. Unless they step up to solve problems or seize opportunities, they risk employee disengagement or even organizational failure. And not having the courage to innovate can lead to being leap-frogged by nimbler upstarts and those better prepared to adapt in a rapidly evolving digital landscape.

Self-Worth and 2 Factors
That said, Choosing Courage is not a call to “organizational martyrdom.” Nor does Detert suggest that leaders make themselves vulnerable to every strong emotion or idea.

“This book is an invitation to consider courageous actions as something that can be done more or less competently, where competence means you increase the chances of accomplishing something positive while decreasing the likelihood of negative personal consequences.”

Detert looks at risks people associate with courageous actions — from the potential to be blackballed, held back or even fired, to the psychological risk-taking of speaking out and up, as well as the dangers of social ostracization. He also describes the benefits of courageous action — for the individual and for others.

“Stuart Scott paved the way for greater diversity in broadcasting, while Chris spared that patient intense suffering or worse and Jackie spearheaded a highly successful campaign. And for the individual leader, choosing courage is indelibly linked to two factors that determine self-worth: regrets that may accumulate and your sense of legacy.”

Speaking Truth to Power
Detert explores the most common types of behavior seen as courageous in the workplace, while setting out practical diagnostics and frameworks, as well as tools to maximize positive impact.

Speaking “truth to power” includes confronting or challenging authority figures and choosing to act with greater autonomy than you might technically have. And it’s not easy.

In a wage-dependent society, we are pretty much hard-wired to fear power, says Detert. Challenging the boss or defying instructions can be downright terrifying. Yet there are scores of instances of people speaking up and effecting positive results without ruining their careers. And it depends on behavior.

Going in aggressively or over-defensively is likely to provoke a greater sense of threat or anger than using reason.

“Say you’ve just been told your team will have no promotions this year. You request a meeting with your boss. You could tell her that you’re sick of defending a pay policy while your team members are being courted by other companies,” notes Detert. “Or you could point out that the decision concerns you because of the risk of losing strategic talent. Which behavior or approach is likely to elicit the more positive response?”

Speaking truth to power, says Detert, takes courage. But it also takes thinking deeply about how to behave — how to frame and communicate with superiors to achieve better results. And though we cannot necessarily predict or guarantee outcomes, there are other benefits to speaking up.

“We know that people are most inspired when they see their own boss stand up to his or her own boss(es), be it about unacceptable interpersonal behavior or unethical or illegal behavior. We’re also highly impressed when our boss goes to bat for us to those above him or her, or defends or takes the hit for us with higher-ups in order to protect our well-being.”

A Personal Choice
Of course, the converse is also true. The data also show that bosses do a great deal of motivational harm by not acting; when they fail to speak up or take other action on egregious workplace practices or behaviors.

“If you think people don’t notice your inaction or aren’t bothered because they know it’s really hard to do these things, the data suggest you should think again,” says Detert.

Ultimately the decision to choose courage is a personal one, says Detert. It is down to the individual to choose whether to be the change they wish to see, as Ghandi encouraged.

Choosing Courage sets out a road map for building the skill of courage and increasing the chances of having maximum impact in doing so.

Tweets by @forbesindia
Just how big could India's true Covid-19 toll be?
Daily Tech Briefing: Moderna says vaccine works in teens, and a conversation with the one who makes the voice assistant in Tata cars