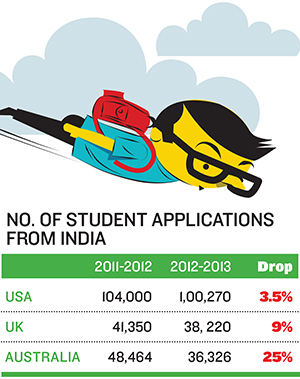 If numbers tell a story, then the plot that is emerging seems to indicate that Indian students are doing a rethink on studying abroad. Indians applying to universities in the US, the UK and Australia—all popular student destinations over the past several years—for the 2012-2013 academic year have dropped, compared to the previous academic year.

The US has seen a drop of 3.5 percent. This is being seen as a result of the volatility of the rupee against the dollar, which has increased the cost of a degree in an American university by 20 to 30 percent. Although official figures for the UK are yet to be released, London Mayor Boris Johnson, on an India visit recently, said there has been a 9 percent fall in the number of applicants from India; a fall of 25 percent is expected next year. Stricter visa norms that no longer allow non-EU students to work in the country for two years after graduating, have been the dampener. Australia has seen the steepest drop—25 percent—in applications from India. Racist violence has tarnished the image of the once-popular student destination since 2009.