Paul talks about his journey at the helm of the Apeejay Group, and the projects that bring his personal and business interests together 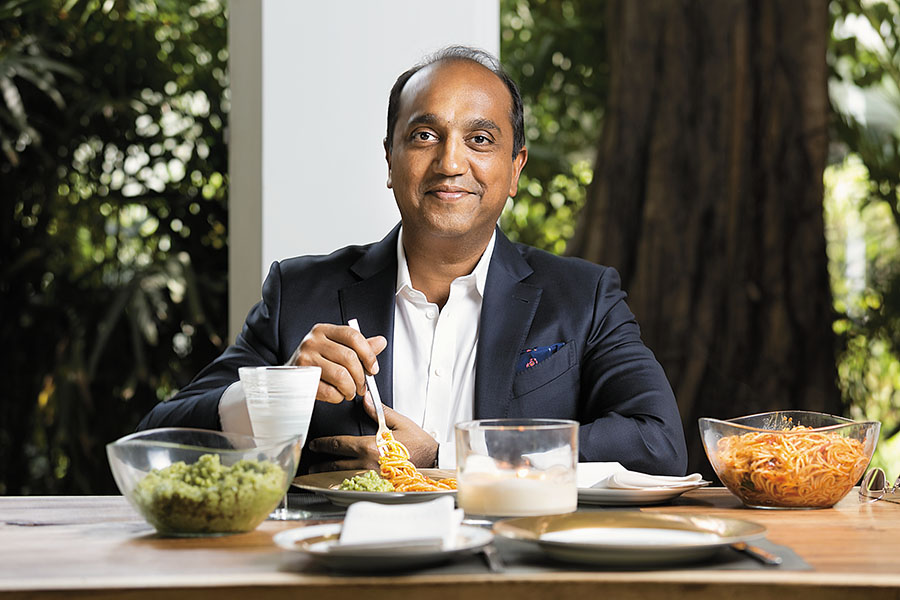 Karan Paul is a global foodie who opted for appetisers, sea food and tea at Sorrento
Image: Madhu Kapparath

He is a foodie, a global foodie,” messages Priya Paul to me, just as I am readying to meet her brother Karan Paul, chairman of the Apeejay Surrendra Group. Coming from her—the chairman of Apeejay Surrendra Park Hotels is a foodie herself, and had flown down Antonio Carluccio, the “godfather of Italian food”, to train chefs at Apeejay’s hotel chain The Park—this is solid recommendation. I keep this in mind as Paul and I sit down to lunch at Sorrento, an Italian restaurant at Shangri-La’s Eros Hotel, New Delhi. It is a blistering summer day and Paul, who has just flown in from Kolkata, rightly chooses to order a cool and crisp New Zealand sauvignon blanc. “I’ll only have a glass if you do,” he adds, and we settle into the talk.

The Apeejay Surrendra Group is one of India’s oldest and largest privately owned family businesses. It operates across many sectors, but its key businesses are tea, hotels, shipping and real estate. Paul looks after the group’s financial planning and strategy and has been making interesting moves to consolidate and grow key businesses in niche ways. But first, the food: We decide to order a couple of appetisers to share and then individual main courses. Sea food is an obvious preference to keep it all light, and so my guest chooses the pescatore salad with the freshest of squids and prawns, lightly drizzled with olive oil and lemon. He also calls for tuna tartare, raw and finely sliced, which is not typically Italian but fashionable these days in modern restaurants of all kinds, including Japanese ones. We don’t regret the choice, but the star of the appetisers is certainly the arancini—fried balls of risotto with parmesan and a hint of bacon—that I have ordered for comfort. Biting into these, we exchange memories of another star dish that most foodies in Delhi, Kolkata and Bengaluru will remember—a no-cheese thin crust pizza with Parma ham and caramalised onions. The Park used to specialise in this a few years ago. 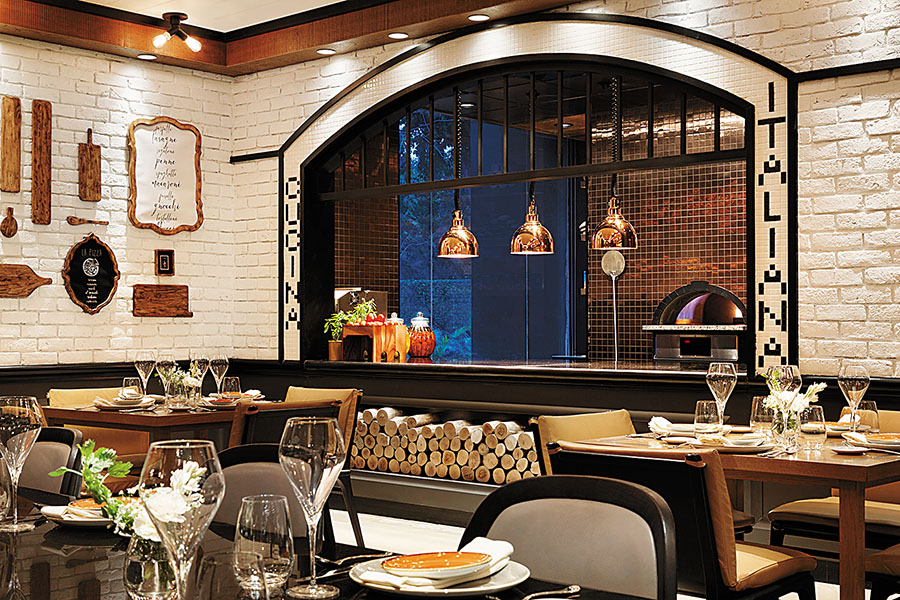 Sorrento, the Italian restaurant at Eros Hotel in New Delhi

Talking about the hotel brand inevitably moves the conversation to Kolkata, home to both Paul as well as the iconic The Park on Park Street, which rung in 50 years last year. “It was tough to come back to Kolkata,” Paul remarks, as we begin tracing his journey helming the business. Paul had joined the Apeejay Surrendra Group in 1992 after his graduation from Brown University, where he studied politics and literature. Those must have been difficult years in the aftermath of the tragic death of his father at a young age and also because, as Paul explains, he had to come back to a city where the youth culture was conspicuous by its absence. “Almost 70 to 80 percent of my class at La Martiniere for Boys [his school] had moved out of the city and there were hardly any younger people around. If you come to Kolkata now, it has changed, it is spruced up. The Trinamool Congress government has given it a lift. But back then, nothing was happening,” he recalls. In 1995, he also turned to entrepreneurship, setting up a finance and stock broking company. He ran these for a decade before eventually selling them off in 2006-07, soon after he took over as Apeejay chairman. However, through the 1990s, as the young Paul stayed and worked in Kolkata, he managed to find other interesting things to do too, within the family fold. The Park, with its brands like Flury’s, the iconic pastry shop, and club Someplace Else, was valiantly trying to create a youth culture in Kolkata. Someplace Else opened in 1995 and slowly became a venue for interesting gigs. “It was a magical time; we started that phenomenon. The club could operate till 6 am, according to the licensing policy of the state, and gradually it became a hub for young, popular culture,” he says. In fact, it is amazing to see how the three scions of the Apeejay Group—Priya, Karan and Priti—are each entrenched in pop culture and the arts, even as they jointly run their family business: Priya, as a known art collector with an interest in design; Priti, with Oxford bookstore, which is a venue for many contemporary culture events; and Karan, with his interest in literature, design and history. “We grew up in a home where we were exposed to these things… our parents collected art and our home always was full of artists,” he explains. A project in Kolkata that Paul personally supervised was the restoration of Park Mansions, a residential and commercial building built by Armenian jute merchant TM Thaddeus in 1910. Owned by Apeejay, it was restored a few years ago, earning the group the CMC-Intach Heritage Award 2013. Now, this personal interest of restoring heritage structures is meeting new business direction for the company in other ways. In June-end or July, Apeejay Surrendra Park Hotels will begin operating The Denmark Tavern in Serampore, a pre-colonial city on the banks of the Hooghly river, which falls within the Kolkata municipal zone. Serampore was part of Danish India under the name Fredricksnagore from 1755 to 1845. The Denmark Tavern dates back to 1786, and in 2010-11, experts began work on restoring its ruins under the Serampore Initiative, a project led by by the National Museum of Denmark and funded by Realdania, a Danish private trust, in collaboration with West Bengal State Heritage Commission, and Intach. Apeejay has entered into an agreement with the state government to manage The Denmark Tavern, which will be the oldest hotel in India. 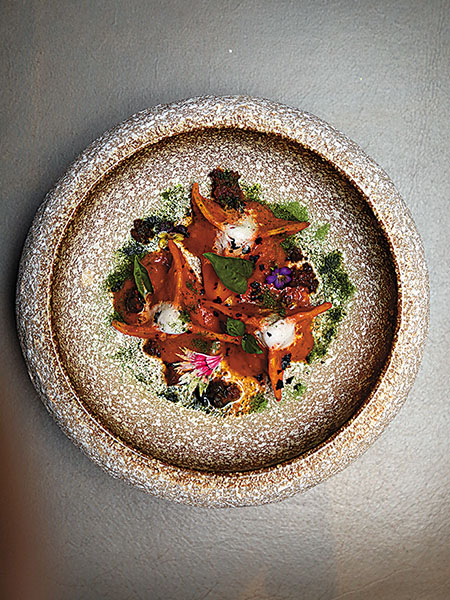 There have also been initial talks with the state government over development and conservation activities in Chandannagore, the former French colony. Other similar projects focusing on heritage tourism around Kolkata could even incorporate Murshidabad (the Mughal centre). “Can you imagine, a tourist could come to Kolkata and spend a few days sailing the length of the river and stop at various historic hubs, tracing different moments in the region’s history?” Paul says, excitedly. This niche space for the hotels business is a meeting of personal and business interests, but it is also in keeping with the “boutique” space for the hotels business. Remaining niche while expanding is important, Paul says, because as a family business that funds itself, it cannot compete with mega hotel companies of the world. This is the same vision for all his other businesses too. It’s time for the main course. Like many discerning foodies, Paul has ordered spaghetti carbonara for himself—a dish by which you can often judge an Italian restaurant, since so many chefs slip up on the sauce (it must have a small, sharp taste of the Roman pecorino along with the more rounded Parmesan). On my part, I have ordered a ravioli caprese, filled with simple goat cheese, basil and tomatoes, because this is the lightest item on the menu. As we spoon up the pasta, we chat briefly about the shipping business (“I love sailing. It is in our blood; we have been in the business for 70 years”) and about how that focus is going to be on coastal transportation on the east coast of India. Then, we move to tea. Just a year after he took over as chairman of the Apeejay Surrendra Group in 2004, Paul made an audacious acquisition: Of the iconic British tea Typhoo, which is today the largest supplier of retail branded tea in the UK. This was India’s second-largest global FMCG acquisition and the seventh biggest corporate takeover by an Indian company. The idea was to forward and vertically integrate Apeejay’s tea business. Today, Paul tells me, he is glad of the move since the tea business in India is going through tough times. The market is no longer lucrative for producers. Production costs [of which labour is a major component] have shot up sharply. “There is huge pressure on margins in the mass CTC business and it is becoming unviable,” points out Paul, who says that his company has shifted its focus to exclusively higher-end orthodox (full leaf, speciality tea which is hand rolled or rolled by machines that mimic hand rolling) production. In fact, the group is now a leader in this space. A future direction to take will be innovation under the Typhoo umbrella, to retail premium black and green teas, in the health or flavours segment. As Paul gives me a glimpse into India’s tea trade, it is time to call for a cuppa. We have both declined desserts. Instead, my guest gives two tea bags of Typhoo’s green Moroccan Mint to the restaurant staff to brew. As the fragrant liquid is poured into cups, it is time to smell the tea and ponder over how businesses can be both enjoyable and profitable if done in accordance with personal tastes, beliefs and values.