How green is your building?

With Odisha's Krushi Bhavan being shortlisted for a global architecture award, we look at how architects bring sustainability to what they build 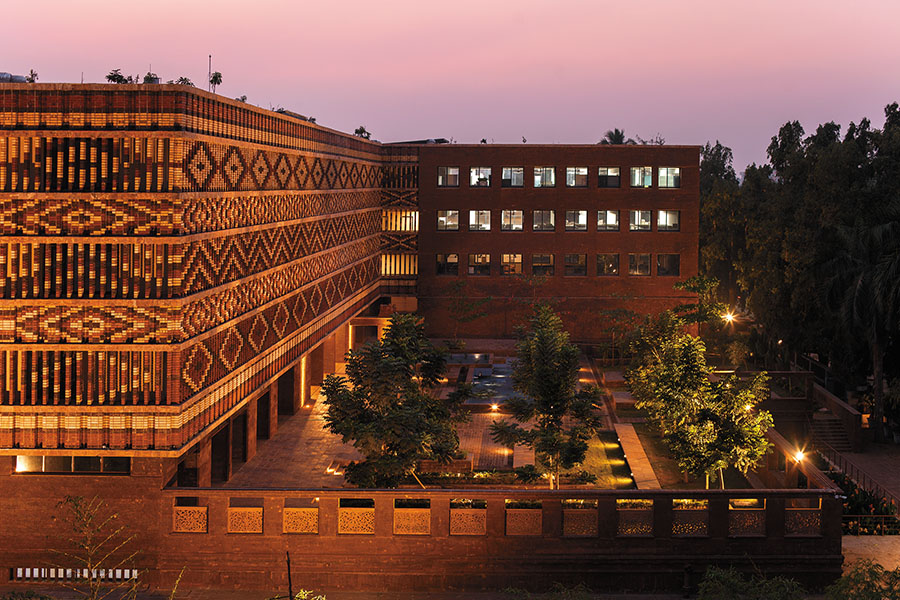 The Krushi Bhavan facade is modelled after the ikat weave, a native textile tradition of Odisha
Image: Sergio Ghetti

As sustainability becomes a concept that is increasingly being adopted in various fields, it is finding its way into architecture with structures and buildings that minimise their negative impact on the environment. According to the US Green Building Council (USGBC), India ranks third, after China and Canada, with more than 899 green building projects and a total area of more than 24.81 million gross square metres.

The ITC group, for instance, has built four green buildings in India. The group’s luxury hotel ITC Maurya in New Delhi is one of the world’s first and largest LEED (Leadership in Energy and Environmental Design) Platinum-rated hotels, and has won numerous awards for being eco-friendly. Among various other initiatives, the hotel recycles more than 90 percent of its waste. The ITC Green Centre in Gurugram too has received a LEED certification from USGBC.

Among public sector buildings, Jawaharlal Nehru Bhawan in Delhi, built in 2013 as the office of the Ministry of External Affairs, is designed in sync with its environment and surroundings. The external design of the building, derived from Edwin Lutyen’s era, incorporates features from traditional Indian architecture, while the interior is contemporary and uses state-of-the-art technology.

For instance, insulated walls and ceilings, and double-glazing on windows keep the building cool in summer and reduce air conditioning requirements by 30 percent; solar panels heat water for the kitchens, while mirror optic fixtures, CFLs and occupancy censors ensure efficient energy use.

Central and state governments are now focussing on sustainable architecture, with the concept being an integral part of the Centre’s Smart Cities Mission, which was launched in 2015. A recent example of this is the Krushi Bhawan in Bhubaneshwar, which has been shortlisted for the 2019 World Architecture Festival (WAF), to be held between December 4 and 6 in Amsterdam. Every year, WAF and its interior design counterpart, Inside, host multiple design discussions, seminars, exhibitions and tours. At the heart of the festival is the WAF and Inside Awards, which receives thousands of entries each year. In the 2019 edition, 534 entries have been shortlisted, from which 33 winning projects will be selected.

Krushi Bhavan, spread over 1.3 lakh square feet and four floors, was envisioned by Chief Minister Naveen Patnaik as the office of the Odisha State Department for Agriculture and Farmers’ Empowerment, in Bhubaneshwar, which was designated a smart city in 2016. The project was commissioned, in 2013, to Studio Lotus, an architectural firm based in Delhi, which adopts the principle of conscious design and uses local resources and cultural influences. The structure was built at a cost of ₹70 crore, and was opened to the public earlier this year. 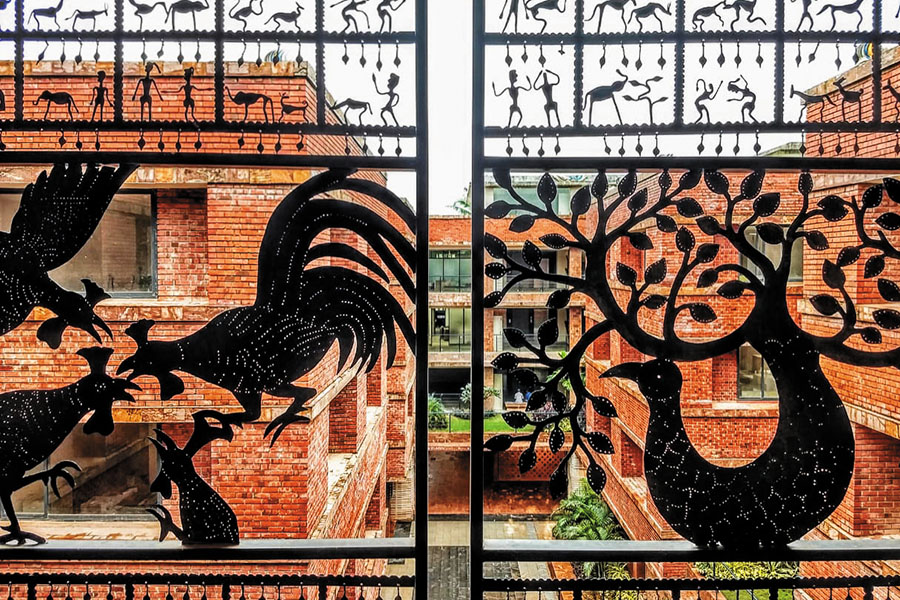 
The façade of Krushi Bhavan is modelled after the distinctive ikat weave, a native textile tradition of Odisha, and is expressed in pigmented bricks that signify the geographical diversity of the state. The tribal craft of dhokra, made of cast metal, has been adapted to make light fixtures that wrap around the ground floor columns, as well as metal screens that line the corridors. The pedestal level and South Wing use locally-sourced laterite and khondalite stones: Hand-carved khondalite lattices provide a sense of enclosure to the Central Court, while there are bas-relief carvings in laterite along the Public Plaza, depicting agricultural motifs in the Odia Pattachitra style.

The offices are housed on the upper floors and are designed to provide a comfortable yet energy-efficient indoor environment, enabled through passive cooling strategies and intelligent night-purging systems.

Sidhartha Talwar, design principal at Studio Lotus, says, “The concerns of sustainability, cultural and contextual suitability, and stakeholder empowerment apply to each project regardless of who commissioned it or what the budget shapes up to be.” The key difference between a private and public project, he explains, is determined by the end user: Private projects are essentially geared towards objective fulfilment for a small or well-defined subset—be it a retail outlet, a boutique hotel, or a small private residence. Public projects, on the other hand, must be inclusive, agile and adaptable within their immediate urban setting, so as to remain relevant and useful for the community in the years to come.

Krushi Bhavan was initially envisaged as a government facility to hold the directorate offices and adjunct workspaces. However, the plan was then revised to create an invigorated urban realm. The ground floor was opened up to become an extension of the street, raised on stilts to create a public plaza that could be utilised for community engagement through workshops, training modules and conferences dedicated to the best farming practices for the state.

“For us, the project and its stakeholders determine the material and technology that goes into the making of a building,” says Talwar. “We strive to produce designs that serve as solutions to a set of pertinent questions, rather than as products of a creative exercise. The solutions that emerge are a direct result of stakeholder engagement, a collaborative process from start to end.”

Another example of Studio Lotus’ work is the recently completed Integrated Production Facility for Organic India—maker of organic and ayurvedic health products—on the outskirts of Lucknow. The facility has been designed to embody the values of holistic wellness. A concrete framework and brick infill structure characterises the built vocabulary of the campus; the operative blocks of the facility intersect to create courtyards and enclosures that double as outdoor spill-outs to workspaces as well as community zones for the employees. The project has recently been given a LEED Platinum certification, which haS been achieved by adapting a courtyard morphology, utilising recycled material, and employing passive cooling techniques. 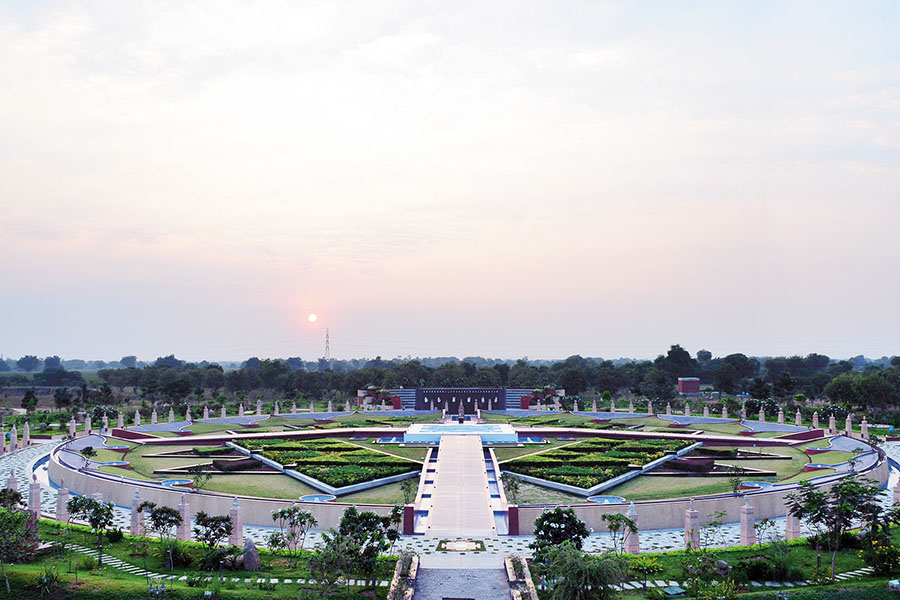 Shantivan in Ahmedabad, a memorial of Cadila co-founder Indravadan Modi, is an example of sustainable architecture
Image: Karthik Rathod


Footprints E.A.R.T.H, based in Ahmedabad, is an architectural firm focussed on indigenous architecture and alternative technology. Headed by Yatin Pandya, it won the Curry-Stone Foundation International Award for Sustainability Practice, In 2017. He has been involved with urban design, architecture, product and interior design and conservation projects.

Sustainable architecture has a bright future in India, says Pandya, as sustainability is not just a mere overlay of thought, but a way of life. “It is moulded into the tiniest of actions, to the greatest of built and unbuilt paraphernalia. The practice of this way of life is in the hands of every individual and that contributes to our environment in one way or the other. We, as teachers, have to impart this education to the newer generation of architects. The future is, quite literally, in our hands.”

One of Footprints E.A.R.T.H’s marquee creations is Shantivan in Ahmedabad, a memorial for Indravadan Modi, the co-founder of Cadila Pharmaceuticals.

For Pandya, design is value addition in a sustainable architecture. “Every line drawn has its meaning. Sustainability is a phenomenon and not an afterthought,” he explains. “Any architecture is based on six basic decisions that we take as a designer: Siting and location, form and massing, organisational structure and movement, choice of space making elements (physical/ spatial), material and construction techniques, and surface articulation and filigree. It is the appropriateness or not of these decisions and more that can render any architecture timeless; and what is timeless, would inherently be sustainable.”

Bankim Kalra is an urban planner and architect who started his career at Auroville in Tamil Nadu, which is considered to be a pioneer in sustainable architecture and living in India. He has co-authored the Bhubaneswar Smart City plan. “Sustainable architecture in the Indian context is not a new concept, but it needs to be revived for the future,” he says. “Our vernacular architecture, be it the courtyards or the details of the jalis, or the local materials used in our buildings will need to be prioritised in all future building designs.” He believes that resiliency and sustainability go hand-in-hand and “in order to future proof our cities to climate change threats and energy efficiency, sustainable architecture will be a necessity”.