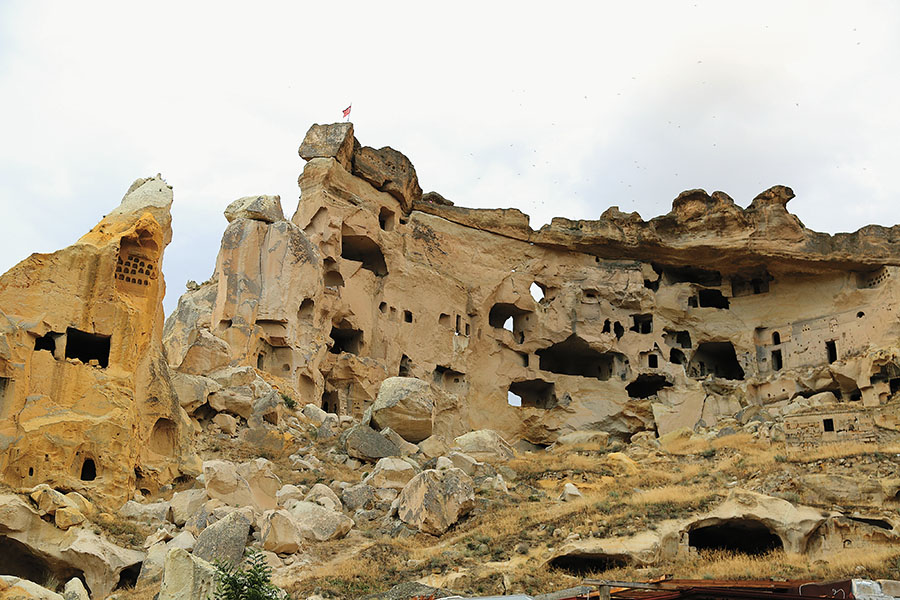 Derinkuyu, one of the largest excavated underground cities in Turkey, has eight levels
Image: Shutterstock

Underground spaces make for exhilarating journeys, with the thrill of descending into the womb of the earth while experiencing a fascinating new subculture. What’s not to love? From the Great Stalactite inside Ireland’s Doolin Cave, and the Western Walls Tunnel in Jerusalem to the 13th century Wieliczka Salt Mine in Poland featuring an entire chapel made of salt, I’ve had my fair share of adrenaline-spiking subterranean sojourns.

However, never had I experienced an entire underground city. Cappadocia, one of Turkey’s most intriguing cities, has a moonlike landscape, honeycombed with ridged valleys, volcanic cones called ‘fairy chimneys’ and craggy hills awash in hues of ochre and vermillion. Countless hidden chapels are carved into the rocks, embellished with hand-painted frescoes. Twisty tunnels, monasteries and settlements sprawl over thousands of kilometres. Covering much of Central Anatolia, Cappadocia was strategically located on the original Silk Route, playing host to people from ancient civilisations like the Hattis, the Hittites, Phrygians, Persians, Romans, Byzantines, Seljuks and Ottomans. To protect their citizens against marauding invaders and religious persecutors, the rulers of the city built a network of cave-cities, interconnected by hundreds of tunnels. The provenance of the twin cities of Kaymakli and Derinkuyu—both are on the Unesco World Heritage List since 1985—is interesting. The underground cities kept expanding organically over centuries, as armies marched overhead in search of captives and plunder. News of villages being invaded would spread like wildfire, sending the residents of these cities scurrying through the tunnels only to surface in another town far away. Though never intended for permanent dwelling, or even long stays, these cave dwellings could withstand attacks and provide support to large numbers of people and their domestic animals for extended periods of time. “Over 400 settlements were built within layers of sandstone in Cappadocia over an estimated 80,000 sq km of the Central Anatolian caldera,” says local guide Nizam Adsiz. “Overall, Cappadocia hosts 36 underground cities, including Tatlarin, Ozkonak, Mazi and Ozluce. Of these Kaymakli [the widest] and Derinkuyu [the deepest] are the most famous.”                                                                                                ***** Expecting dark and damp innards, I’m pleasantly surprised at Kaymakli to find the underground city’s rough, white walls well-illuminated with halogen bulbs. Its floors are sloping, with undulating surfaces, occasionally riddled with craters, which makes walking on them a tad difficult. Bending and twisting, and mindful of sharp projections from the low ceilings of the caves, we move one step at a time, trying not to collide with other visitors. It is a real maze, and if it weren’t for the signposts marking directions, it would be easy to get lost in the labyrinths. 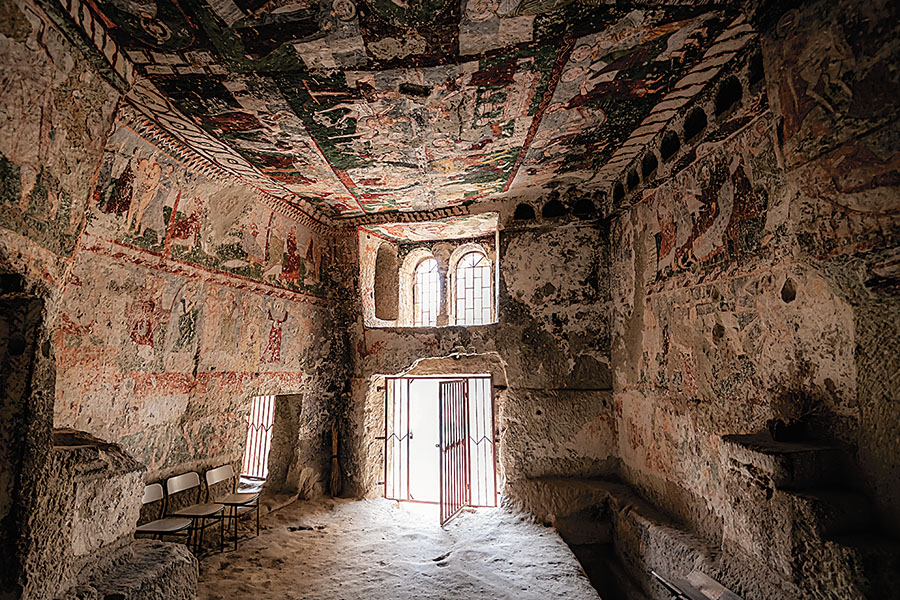 The 10th-century Pancarlik Church, housed inside a group of rock cones, in Cappadocia
Image: Shutterstock

It is a deeply immersive experience. For this is a unique ecosystem, with hundreds of intricate tunnels overlapping each other, connecting a phalanx of chambers, caverns and corridors. On the first floor there’s a stable, and living areas hollowed out of the stone. On the third floor are the settlement’s most important areas—the cellars, winery and kitchen. Adsiz explains that visitors are allowed on only four of Kaymakli’s eight floors since the city was opened to the public in 1964. “Each floor had different functions, ranging from storage areas and stables to cooking quarters and churches,” he elaborates, as we examine stepped pits, and inclined corridors linked to family rooms and communal spaces. The meticulously planned city also has wells, chimneys for air circulation, niches for oil lamps, storages and water tanks. 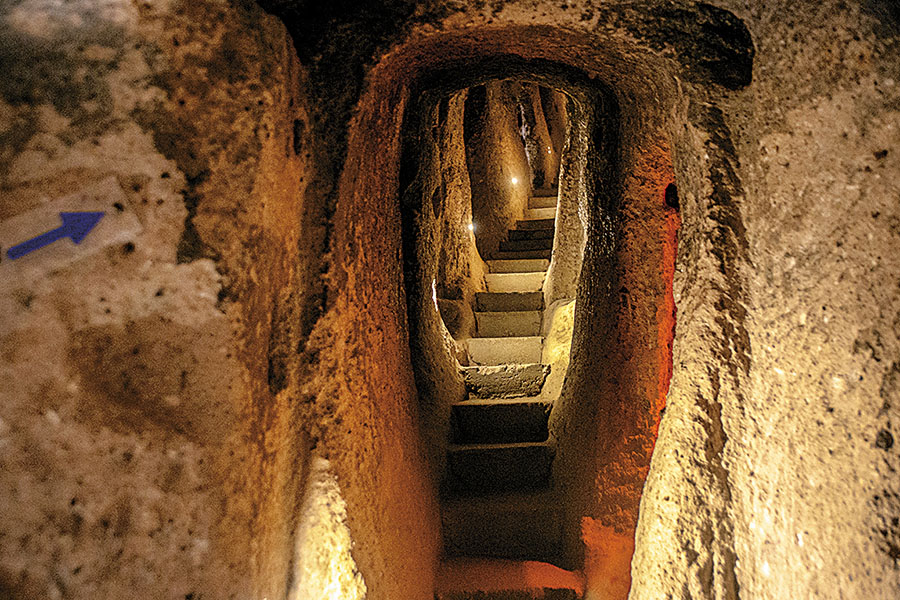 Derinkuyu is connected to Kaymakli by an 8-km tunnel
Image: Shutterstock

Though clambering and crawling along tiny passageways can initially be fun, it gets claustrophobic after a while. The aisles are narrow, allowing only one person to pass at a time. The space crunch occasionally struck fear in my heart that I might get trapped there forever. Or that a roof might cave in! However, a sudden twist and a turn, and the irrational fears dissipate as airless passages give way to an air- and light-filled chamber. About 45 minutes after entering the underground city, we’re disgorged through the same route we’d taken to enter it. Outside, we chin-wag with a few villagers living around Kaymakli who tell us they have built their houses around the tunnels to use them as cellars and stables.  The next day we visit Derinkuyu in southern Cappadocia. Located in a town by the same name, it was built between the 6th and 9th centuries. “It was opened to visitors in 1965 and once accommodated as many as 50,000 residents,” Adsiz explains. The complex bears a remarkable resemblance to Kaymakli, to which it is connected by an 8-km tunnel. A capacious bathhouse greets us on the ground floor, complete with a set of private rooms. Next to it is the kitchen, a small prison and a section for cattle. On the second floor is a large room with a barrel-vaulted ceiling, which was used as a missionary school, along with classrooms. Also on the upper levels are a stable, a wine press and a storage vault. Massive millstones recessed into the walls were apparently used as security doors and rolled into place to keep out invaders. As we progress down the tunnels, I hear echoing exclamations from a crowd in the distance. As we reach them, I soon see the reason for their surprise: The group is viewing some of the incredible 15,000 ventilation ducts that provide fresh air deep within the 85 mt-deep city. One of the largest excavated underground cities in Turkey, Derinkuyu has eight levels, although only five are on view. (There are still many unexcavated floors.) Sprawling over 2.5 sq km, it was inhabited until the late 1930s, the guide explains, with 600 doors leading to it hidden in the courtyards of dwellings on ground surface. These doors allowed villagers to escape in the eventuality of an attack. “It was the malleable volcanic rock of these underground cities, moist and soft to the touch, which made the ancient people realise that they could chisel out a home here,” Adsiz adds. Many of Derinkuyu’s walls and ceilings carry small engravings made by its residents as long as 3,500 years ago. As our tour concludes, we wind our way up a spiral staircase and come into the open. 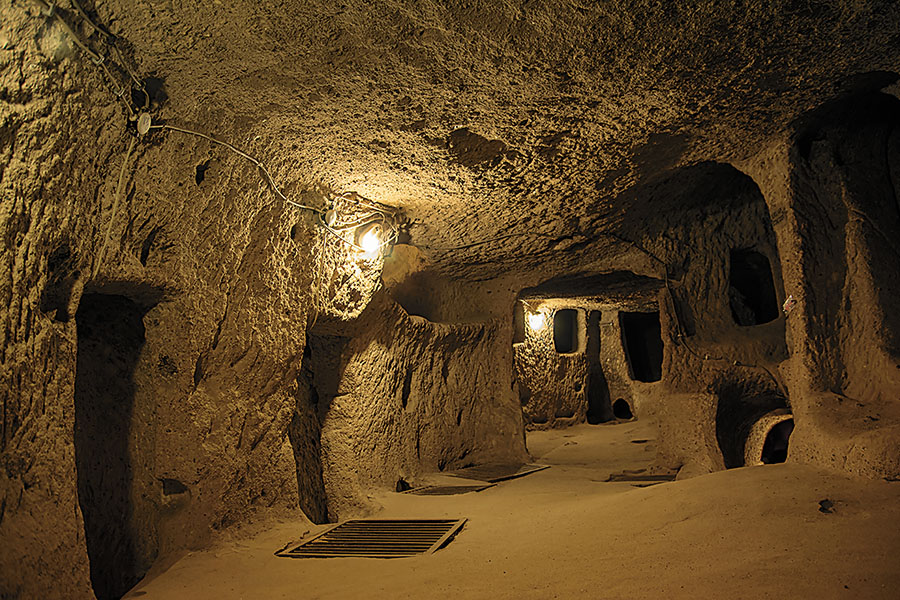 The underground city of Kaymakli has eight floors but only four are open to visitors
Image: Shutterstock

For those who wish to continue their experience of the underground cities, there are many on-site cave hotels at both Kaymakli and Derinkuyu that are inspired by the two cities. However, as the number of tourists increase—local authorities say Cappadocia attracted 440,686 visitors in the first quarter of 2019 alone, a six-year high—environmentalists have raised concerns about construction activities. Potential damage from earthquakes and other environmental factors such as wind and water erosion have further aggravated these worries. However, the cities also serve a useful purpose. The constant underground temperature of about 130 Celsius also makes these caves an ideal storage space for thousands of tonnes of fruit and vegetables: Apples, cabbage and cauliflower stay fresh for up to four weeks, citric fruits, pears and potatoes for months. This has encouraged producers to use them as warehouses. “We can save on transport, waste management and warehousing, and reduce the pressure on above-ground storage spaces by stocking up here,” says Iqbal Gureli, a local fruit producer. This is no new phenomenon. Caverns and hollows have been used as dwellings and food storage spaces since the Paleolithic age, millions of years ago. Underground cities have existed in Portland (Shanghai Tunnels), the Czech Republic (Pilsen), in France (near Poitiers) and Spain (Granada). Experts too highlight the advantages of underground living and storage arrangements. For instance, Nikolai Bobylev, associate professor at Saint Petersburg State University, in an essay for the university’s in-house magazine, wrote: “Underground spaces are less susceptible to external influences, and their impact on the external environment is less than above-ground facilities. Further, deep underground structures suffer significantly less damage during earthquakes than above-ground structures.” Indeed in a world where different forms of sustainable living solutions are being explored, perhaps it is time to give these prehistoric options more thought than simply using them as tourist attractions.

Tweets by @forbesindia
How brands can earn customer respect
ClickOnCare: Providing health and wellness care for all since 2014