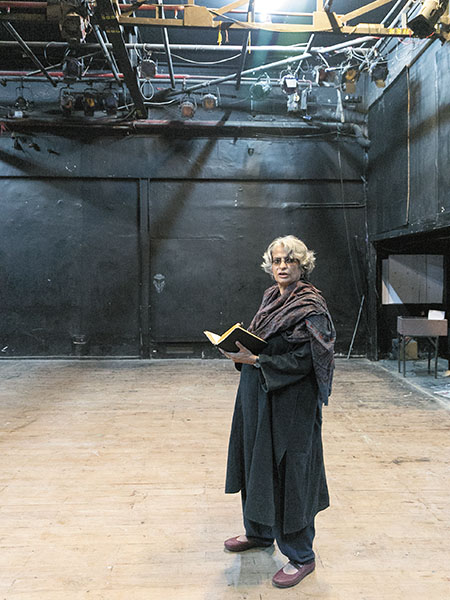 Anuradha Kapur’s has been a distinguished career. One that has spanned almost five decades, and which hasn’t quite lulled the enthusiasm with which the director and pedagogue continues to negotiate new territory in the performing arts.

From creating linkages between theatre and early feminist protest, to being honoured with the Sangeet Natak Akademi Award in the field of direction in 2004, from authoring a book on the Ramlila of Ramnagar to a prestigious six-year tenure as director of the National School of Drama (NSD), Kapur has arguably had an influence much beyond the confines of academic institutions. An example that highlights this is her recent engagement as theatre curator for the Serendipity Arts Festival in Goa, whose third edition begins this December.

Kapur’s advent took place in the 1970s, during what she describes as a veritable renaissance in Hindi theatre. As part of Om Shivpuri’s Dishantar group, she acted in several plays including Mohan Rakesh’s seminal Aadhe Adhure. Later, after completing her post-graduation in drama and theatre arts from the University of Leeds in the UK, she joined NSD as associate professor in 1981. “I had left for England, very clear in my head that I would like to pursue this profession. Joining drama school almost immediately meant working in theatre without worrying about a sideline to sustain it,” she says.

At NSD, she directed several productions over the years, but one of her most talked-about productions was Viraasat, a composite version of Mahesh Elkunchwar’s Marathi masterwork, the Wada trilogy, which opened in 2013. It was significant because of the manner in which it expounded its proto-feminist themes and the painstakingly created hyperrealist set by Deepan Sivaraman—a replica of the interiors of feudal mansions in Maharashtra’s Vidharba district, with a courtyard at its centre. The production was an example of how Kapur considers site-specificity as an important hallmark of her oeuvre, having collaborated with Sivaraman in the equally atmospheric student production, Dr Jekyll & Hyde, the previous year. 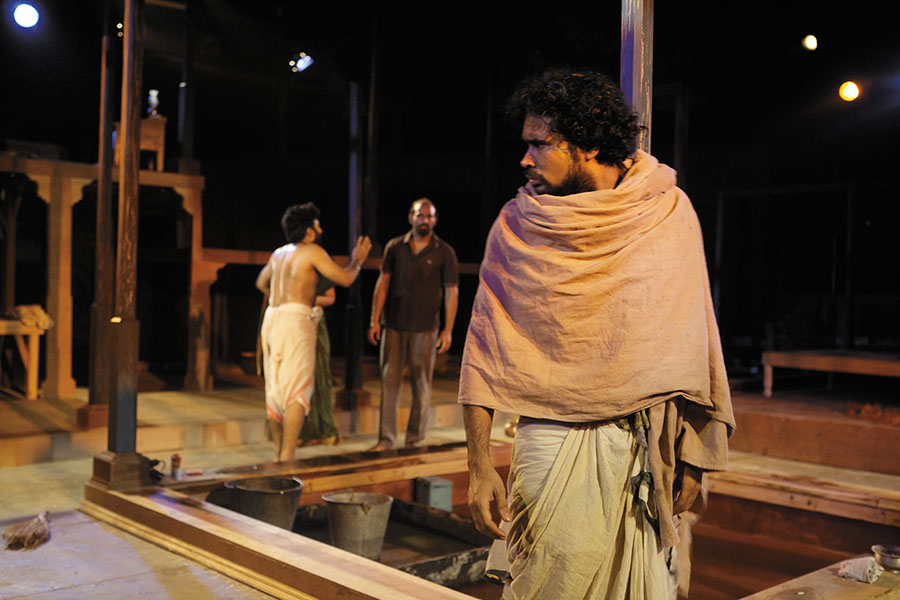 Viraasat is one of Kapur’s most talked-about plays
At the 2014 International Theatre Festival of Kerala, Viraasat raised hackles because of its seemingly expensive set, but Kapur has never been apologetic about the lavish outlay at her disposal, which presents a stark contrast to the near penury in which experimental theatre practice exists outside state-funded institutions. “I don’t usually cut corners in my work, and I strongly believe the school should allow its students the resources they need,” she emphasises.

Still, with a budget of around ₹7 lakh, Viraasat was mounted at the lower end of the usual allocation, with material recycled from older productions. The play’s detractors have included those with a decidedly puritanical outlook towards Hindi theatre. It wasn’t a proscenium work, and its actors, who hailed from several corners of the country, spoke in polyphonic accents, rather than the formal style of speech popularised by All India Radio in the 1950s. The cultural coordinates of a simulated upper-class Brahminical household were also called into question, as if sacrosanct.

After her directorship at NSD ended in 2012, Kapur continued at the school on extension for another year before her successor was appointed. Later, she began an ongoing spell at Ambedkar University Delhi (AUD) as visiting professor, while remaining part of NSD’s faculty. The two institutions have markedly different methodologies, which was certainly a challenge for Kapur. “The drama school focuses on improving students’ skills, with just an undergirding of theory, while AUD had elements of practice interwoven into a more academic curriculum,” she explains.

Her own practice exists in the confluence of these two approaches. At NSD, she had found, within the student body, a real struggle with the articulation of practice, even if such a discourse was critical to it. “The students were often daunted by theory, and become very suspicious of being a practitioner, whereas at AUD, writing about practice became more important than practice itself,” she continues, perturbed both by the anti-intellectual and the pedantic.

Similarly, the formally structured scheduling of university classes stood in some contrast to the free-wheeling explorations and repetitive rehearsal processes that NSD students readily embraced. Kapur has had to constantly grapple with this push and pull of sensibilities in her years as a pedagogue. One of the big changes that she has participated in at NSD is the overhauling of the syllabi in the 1980s, which separated it from the British drama traditions on which the curriculum had been founded.

Kapur’s long-standing interest in inter-disciplinary works can best be seen in her long-term involvement with Vivadi, the group she co-founded with painters, musicians, writers and other theatre practitioners in 1989, starting out with an adaptation of Rabindranath Tagore’s Ghare-Baire (The Home and the World), and Nayika Bhed, a play devised by the actors about the representation of women in myth, popular fiction, and literature. The plays were designed by the painters Vivan Sundaram and Nilima Sheikh respectively. 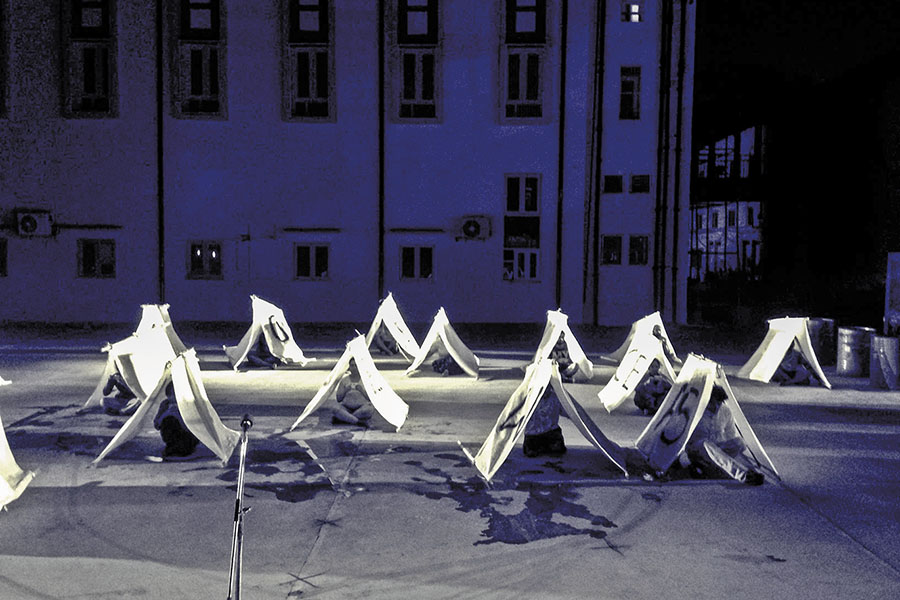 The group’s most recent outing has been in 2017, with Dil-o-Danish, based on Gnanpeeth-winner Krishna Sobti’s novel, set in the Delhi of the 1920s. A brilliant evocation of the Ganga-Jamuni tehzeeb (the culture of the Northern Indian plains) of that period, it sits well with Kapur’s secular liberal credentials. The premiere involved an almost meditative reading of the text, in the open lawns of a private residence in Jamia Nagar, even as Delhi’s culinary delights were served to the audience. “Durational readings elongate time and draw out its native rhythms, preparing us to hear a moment when Delhi lived slow, quite different from the NCR as we know it now,” wrote Kapur in a piece about the performance.

The Serendipity Arts Festival, therefore, is a platform that worked well with her running interest in interdisciplinary works, as she tried to set in place a cohesion of intent in the selection and commissioning of works. “I was interested in material that didn’t fall within the dichotomy of modern and traditional, but brought forward the marginalised voice,” she says. One of the festival’s pet projects was Abhilash Pillai’s Talatum—The Circus, in which Shakespeare’s Tempest is performed within a real-life circus, with actors mingling with trapeze artists, clowns and other denizens of a historical urban popular form of entertainment that has been pushed to the fringes of society.

Kapur’s latest work is the politically tinged resistance piece, Dark Things, co-directed with Sivaraman, which is the first work at the AUD for which she has taken up directorial reins, and which opened to the public earlier this year. Staged in a basketball court, it is a topical performance that captures issues related to global capitalism, migration, and the pervasiveness of technology.

A student production that is part of a musical theatre elective, it came with its own constraints. “I was more anxious than Deepan, because this was my first time working with students with little or no experience of acting,” says Kapur. Yet, she feels that a work offered as a public artefact, something that has a relationship with an audience, must necessarily stand up to all standards of critical scrutiny. “The strategies one employs in a project of this kind involves knowing where to position the different members of a creative team,” she explains.

Characteristically self-effacing, Kapur is not entirely willing to impinge her credentials on a theatre landscape to which she has contributed in no small way. “I have always been hesitant to find a form or distinctive style, or a signatorial touch,” she says, quite mindful of the patriarchal hierarchies that were de rigueur when she joined the profession. Her interest lies in non-hierarchical work, collaborations in which the hegemony of a ‘guru’ might be dispersed, projects in which the process outstrips the product.

The vaunted auteur model that was once theatre’s mainstay, and continues to thrive in pockets, was something she had always rebelled against, which could have a lot to do with her being one of a small tribe of women practitioners who came into prominence in the 1980s—theatre makers like Anamika Haksar, Maya Krishna Rao or Kirti Jain. “It was a generation for whom improvisation and devised work was becoming critically important, and that drew me towards a collaborative space,” she says.

The language of theatre she and her cohorts discovered wasn’t dictated by the patriarchal notions that had taken root in Indian theatre. There were others who embraced the status quo and flourished, but the fruits of Kapur’s labours is much more discernible now, when alternative processes are very much the norm. She doesn’t want to completely take credit for this shift in theatre either: “I think there was a congruence, it wasn’t just happening at NSD, it was happening in other quarters as well.”

Successive batches going out into the world effected the cross-pollination that has resulted in a generation that don’t belong to any specific ‘gharana’, to borrow a term from classical musical parlance. This is something Kapur finds particularly satisfying, and as she continues to grapple with her chosen medium, she does take pride in the consistency of intention that has kept her on her path.